Vietnam is not a very religious country. A small part of the population is Christian (Catholic or Protestant) and for that reason you will find several cathedrals & churches in Vietnam. Most people have folk belief or are Buddhist, so for that reason you will find more Buddhist temples in Vietnam. Christianity was mainly brought here by missionaries during the French colonial period from 1887 to 1954. It is no surprise that many of the impressive churches in Vietnam also date from this period and are built in the French Colonial style.

Tips for visiting churches in Vietnam

The St. Joseph’s Cathedral is one of the most impressive churches in Vietnam and the oldest in Hanoi. The cathedral was built in 1887 and is said to look a lot like a smaller version of Notre Dame de Paris. This church in Vietnam was seen as the center of Catholicism in North Vietnam during the French colonial era. A visit to St. Joseph’s Cathedral is one of the best things to do in Hanoi and can be perfectly combined with a stroll through the Old Quarter. 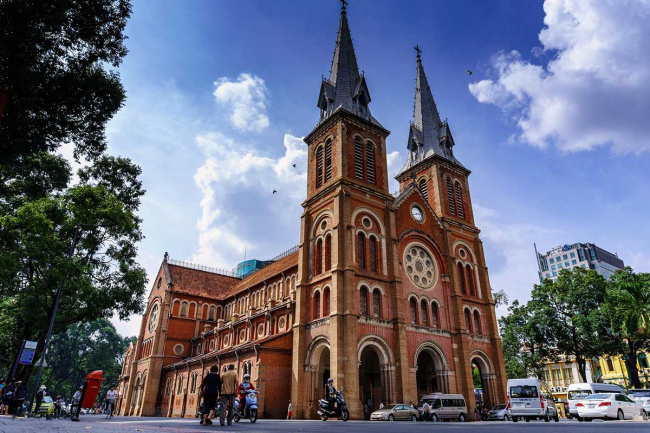 The most famous church in Vietnam is the Notre-Dame Basilica located in Ho Chi Minh City and is one of the most famous symbols of the city. This church was also built during the colonial era in French style between 1863 and 1880, opposite the impressive colonial Central Post Office. It is a popular place for travelers, couples taking wedding pictures and students practicing their English with the tourists. 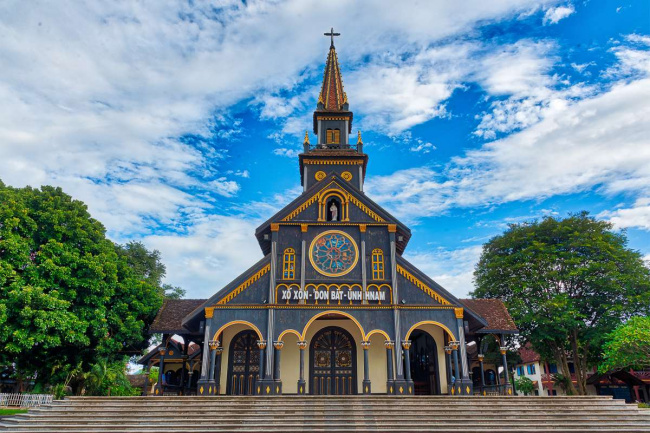 The Wooden Church in Kon Tum is probably the most impressive building in the entire province. It was built in 1913 by a French priest using high quality wood from the area. The architecture is a mix of Roman style and the local Ba Na ethnic minority who live here. Combine a visit to one of the most unique wooden churches in Vietnam with the ancient Bishop’s House 500 meters away.

One of the most striking churches in Vietnam is the Tan Dinh Church in Ho Chi Minh City, also known as the Pink Church. Of course, the bright pink color is the main draw for most travelers who want to visit this church. However, this religious building is also one of the oldest churches (1876) in the city and one of the most important Roman Catholic institutions. It is certainly impressive to visit this colonial church when you are in town and combine it with the Tan Dinh market 100 meters away for a truly local experience. 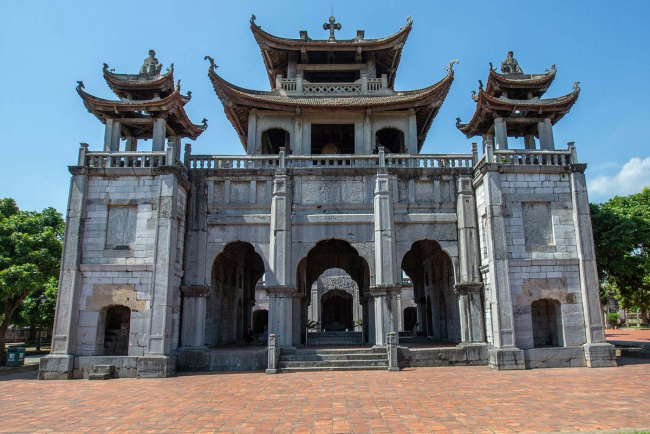 Located in Ninh Binh, Phat Diem Cathedral was built around 1880 from complete natural stones from the nearby mountains. The complete complex took 24 years to build. Next to the church there is also a lake with a small island with a statue of Jesus, a number of caves and a bell house. The sheer size of the complex and the use of the gray local stones make this one of the most unique churches in Vietnam. Phat Diem is about 25 km from Tam Coc and is best reached by scooter or car with driver. 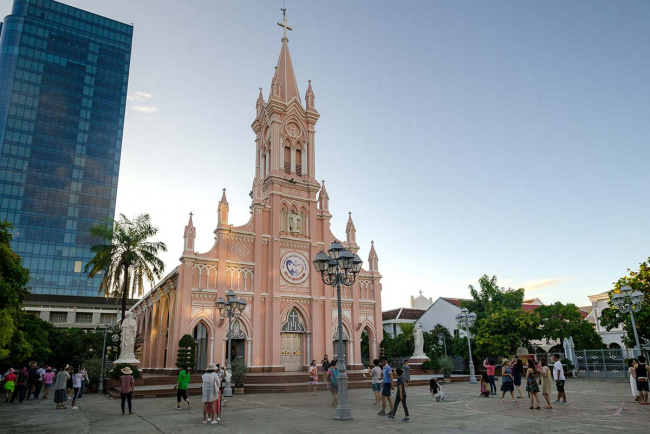 Just like the Tan Dinh Church in Ho Chi Minh City, the Da Nang Cathedral is completely pink with some white elements. This 70 meter high church was built in 1923 by the French priest Louis Vallet. Due to the beautiful bell tower with a rooster weathercrock, the church is also called Rooster Church (Con Ga Church). As the only church in Da Nang, this is an important place for the local Catholic community. 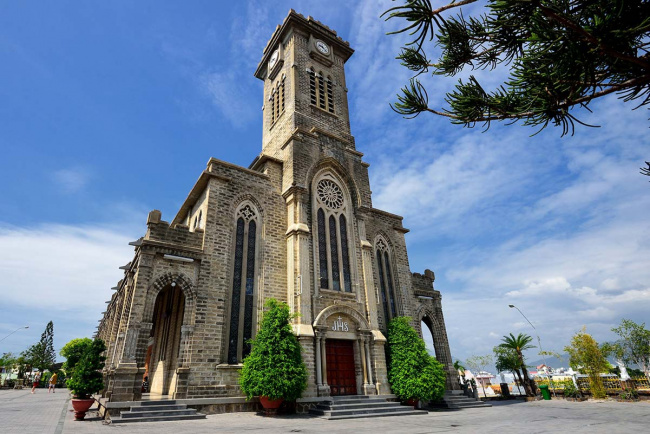 The Nha Trang Cathedral is the largest church in this seaside town. The church, built in the late 19th century, is made entirely of stone and has beautiful stained glass windows and a square clock tower. Outside the church are a number of statues and thousands of tombstones. It is especially popular among the locals to take wedding photos, as well as for travelers who want to visit one of the most important remnants of French architecture in Nha Trang. 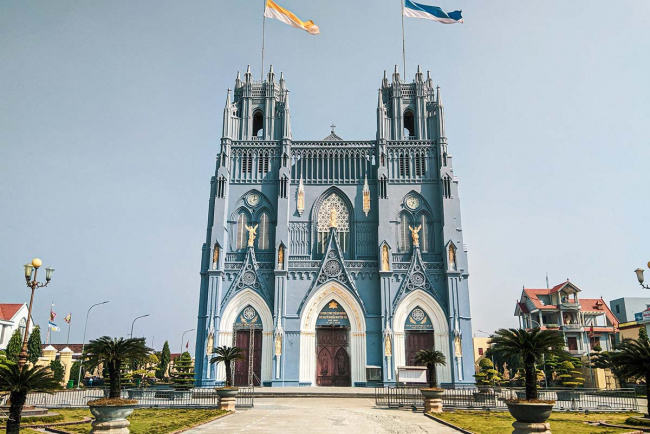 The Basilica of Immaculate Conception is also briefly called Phu Nhai Church, after the name of the place where the church is located. Construction of this church began in 1866 after Emperor Tu Duc signed a ceasefire with the French and promised not to harm any Christian. The complex is huge and consists of two churches, the first built in 1881 and the second in 1916. Violent storms severely damaged the complex in 1923, triggering a lottery to use the proceeds for the restoration. The Phu Nhai Church complex is hardly visited by travelers despite its size, because it is quite remote from other tourist destinations; Hanoi – 120 km, Halong Bay 160 km and Ninh Binh 60 km. 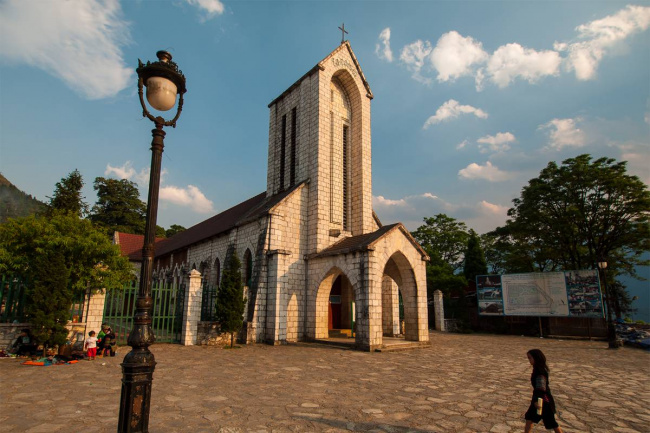 The Stone Church in the mountains and among the famous rice fields of Sapa may not be the most impressive church in Vietnam, but it may be the most adorable one. This small stone church was built in 1902 during colonial times. During the Second World War when the Japanese troops occupied Vietnam, the church was used as a warehouse for rice and other agricultural products. Due to its location high in the mountains, it has also suffered a lot from the natural elements, which caused that it had to be restored no less than 5 times. The Dalat Cathedral, officially St. Nicholas Cathedral, is a Roman Catholic cathedral also built during the French Colonial era in 1932. The city of Dalat was a popular place for the French to cool off from the hot Saigon, as it sits in the mountains is 1500 meters high. In addition to this cathedral, you will also find several French villas in the area, many of which are abandoned. Its location high in the mountains and between the forests in the cool and fresh air makes it a wonderful place to visit. This makes it one of the best churches in Vietnam to visit.