Beyond the vast lakes, temples and historic colonial architecture, Hanoi serves as a congregation of incredible food. Being the capital of Vietnam, it’s peppered with stalls selling authentic Vietnamese cuisine from different regions.

We’re here to get you started on your Hanoi food journey with a guide of 10 eating places to visit. Get your taste buds ready for some wonderful culinary experiences. 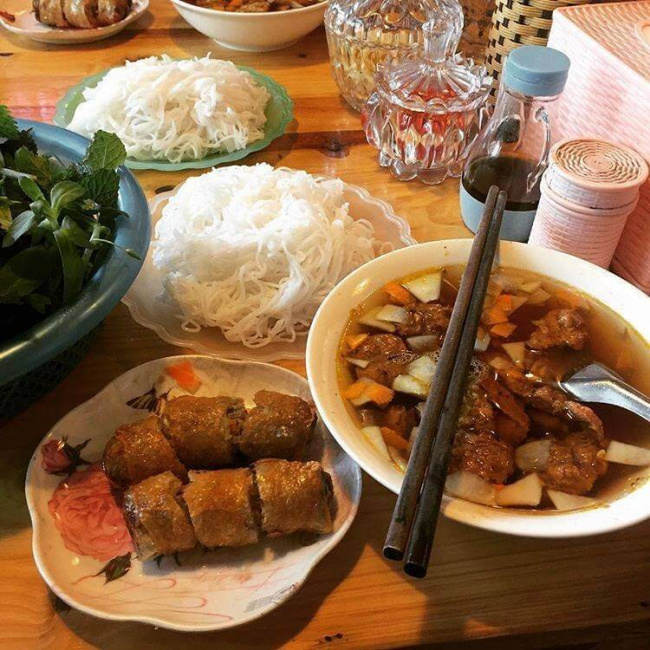 One of the most popular lunchtime food choices in Hanoi is bun cha, which consists of caramelised grilled pork patties served in a bowl of dipping sauce that acts as a broth. Rice noodles usually accompany the dish, along with fresh herbs such as perilla leaves, which give it a refreshing aroma. Bun Cha Ta Hanoi is one of the more popular restaurants for its spectacular bun cha. In addition, this place offers vegetarian renditions of its meat dishes. What to order: Bun cha ta full option — seasoned pork patties with noodles and herbs (VND95,000, or S$5.70) 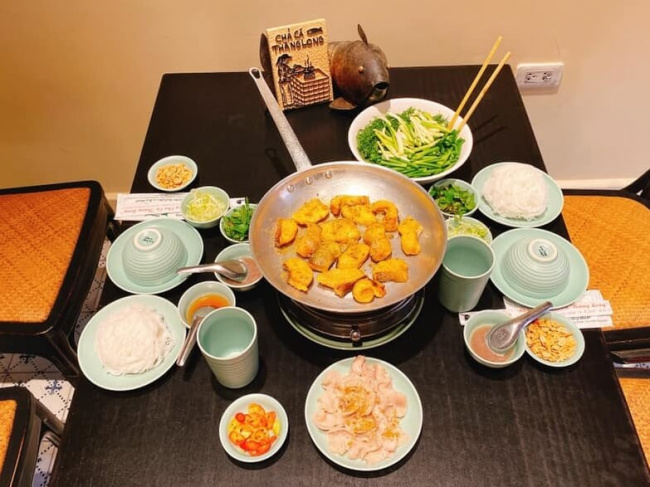 An iconic dish that Hanoi is famous for is cha ca — a variety of snakehead fish that’s marinated before being grilled and then served in a pan of hot oil to customers. The distinctive yellow colour of the fish comes from the turmeric used in the marinade. It’s also typically prepared in front of the customers, where herbs and the fish are cooked together before being served with noodles. One can also add peanuts and fermented shrimp paste to add oomph to the dish. Listed as one of the must-try foods in Hanoi, there’s an entire street — Cha Ca Street — named in honour of this historic dish. What to order: Cha ca fish — Vietnamese grilled fish (VND150,000 per person) 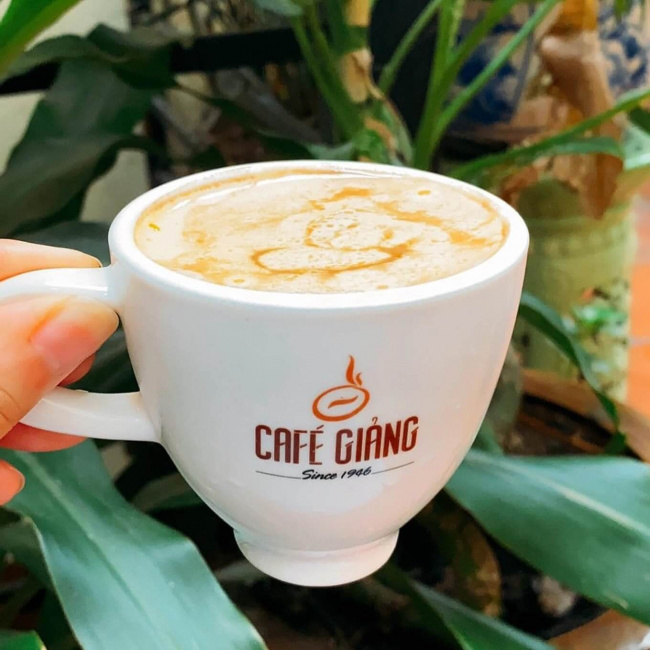 This quintessential beverage of Hanoi was born from a shortage of milk back in 1946 when Vietnam was at war. One man decided to replace milk with eggs and realised the potential it had to be something special. Indeed, the founder of Cafe Giang perfected the recipe and established the first egg coffee shop in Hanoi, which now serves as a popular tourist attraction. Using egg yolks, sweetened condensed milk, coffee, and other secret ingredients, Cafe Giang’s egg coffee is creamy and dense. Customers can choose between scooping the custard-like coffee with a spoon or drinking it directly from the cup. Apart from egg coffee, it also offers other unique combinations such as egg beer and egg Coke. What to order: Ca phe trung — egg coffee (VND30,000), bia trung — egg beer (VND50,000) 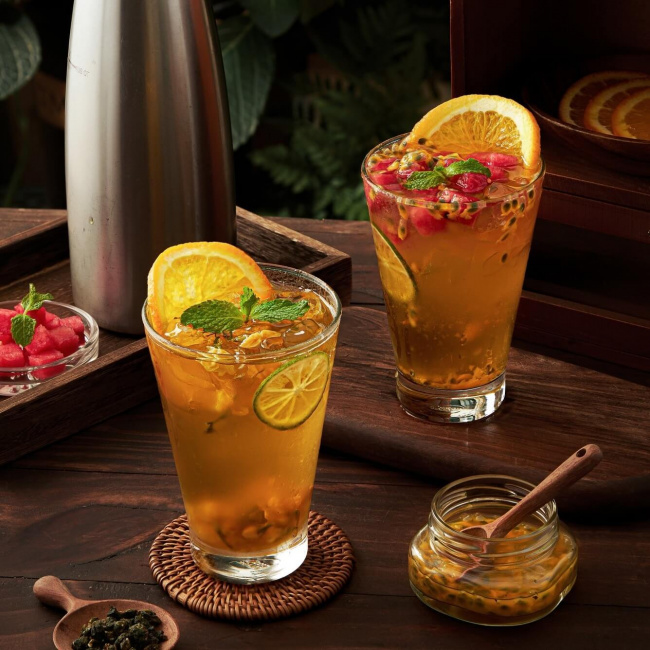 This homegrown modern coffee and tea brand specialises in brewing oolong tea. Through Phe La’s ingenuity, it has created unique concoctions such as oolong tea with egg coffee and roasted rice pearls. Using only high-quality tea leaves imported from the city of Da Lat in southern Vietnam, the people behind Phe La pride themselves on being experts who are meticulous in their craft. Moreover, the cafe has also garnered a reputation for having a cosy and clean space. What to order: O Long Coffee Milk — oolong with coffee and milk (VND55,000), Pearl of Rice — roasted rice boba (VND10,000)

Serving Vietnam’s national dish, pho restaurants are naturally held to higher standards. Pho Thin 13 Lo Duc Str is one of the most popular pho restaurants in Vietnam that’s been in business since 1979. The owner himself has been preparing pho for more than 40 years, so you can be sure that he’s an expert. Though the pho is pricier by local standards, it might be worth every cent as customers are given generous servings of tender beef, scallions, herbs, and silky smooth rice noodles within minutes of ordering. Pho Thin’s success has been well-documented by media outlets and it even has overseas branches in places such as Melbourne and Tokyo. When locals and tourists queue to have a bowl of pho, you know it’s the real deal. What to order: Pho dac biet — special pho (VND80,000) 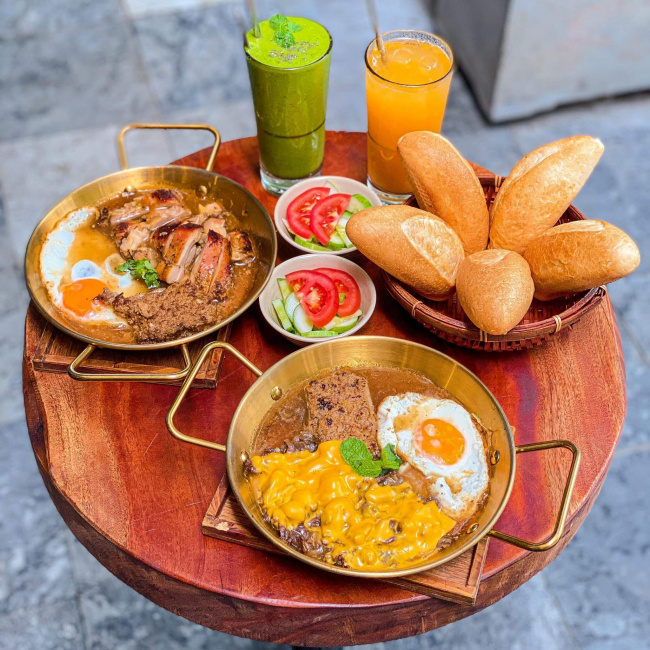 Kickstarted by a husband-and-wife team in 2014, the couple has modernised traditional banh mi recipes to attract younger customers and tourists. Banh mi is a Vietnamese baguette sandwich typically stuffed with meat, assorted vegetables and herbs. At Banh Mi 25, there are vegetarian options available and the baguettes are served separately with a pan of cooked ingredients. These features may be uncommon for traditional banh mi stalls, but they are proving to be some of the reasons for its success. What to order: Banh mi thap cam — mix of pate, barbecued pork, ham and sausage (VND35,000), cafe cot dua — iced coconut coffee (VND30,000) 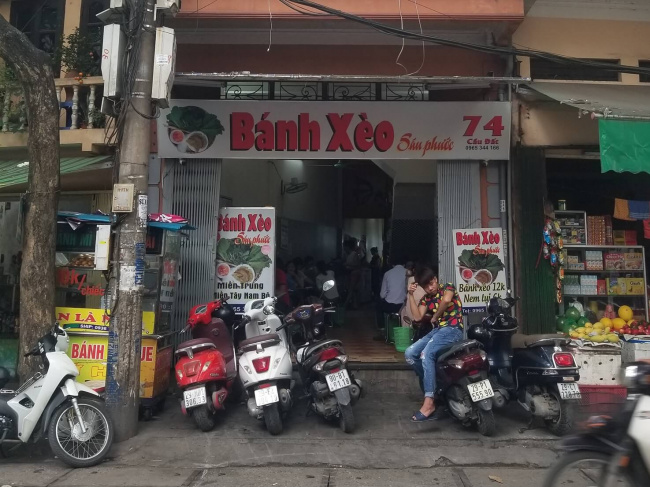 Located in a residential area that’s also close to tourist attractions, Banh Xeo Sau Phuoc is an ideal pitstop for hungry travellers. This eatery is known for its excellent banh xeo — Vietnamese crispy rice pancake filled with pork, shrimp, mung beans and bean sprouts. It’s served with a dipping sauce mixed with chilli and lime to add some spice and acidity. To get a more refreshing taste, one can also wrap the rice pancake in green leafy vegetables. Customers have expressed appreciation that the eatery does not charge exorbitant prices for its food, despite being near tourist attractions. It’s a gem indeed. What to order: Banh xeo — crispy Vietnamese pancake (VND15,000), nem lui — spring rolls (VND8,000) 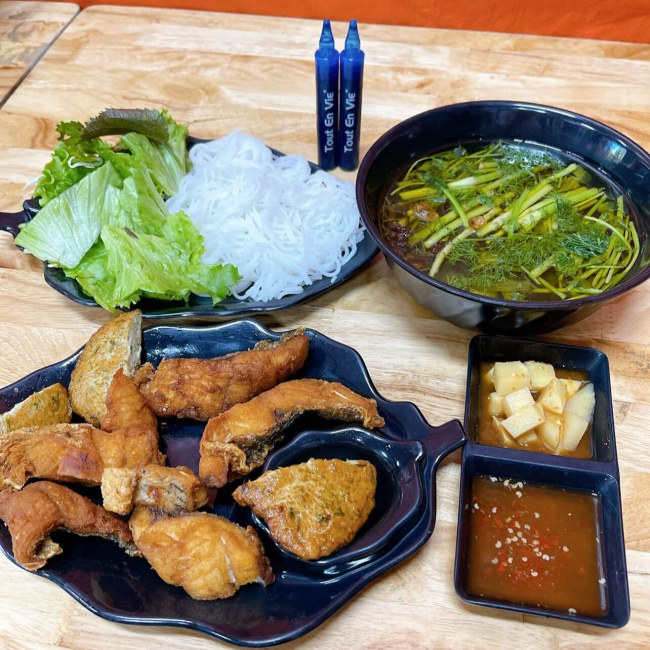 Bun Ca Cham Ngon Ngon – Luong The Vinh is a place that sells superb bun ca — Vietnamese fish noodle soup. The pieces of fish are first fried in oil to give them a crispy outer layer before being mixed into a rich broth with rice noodles. Similar to other Vietnamese dishes, the broth is filled with an assortment of vegetables and herbs to bring balance to the dish. Apart from the fried fish, this stall also makes good fishcakes. What to order: Bun ca cham day du — fish noodle soup set (VND55,000), cha ca an them — fishcakes (VND25,000) 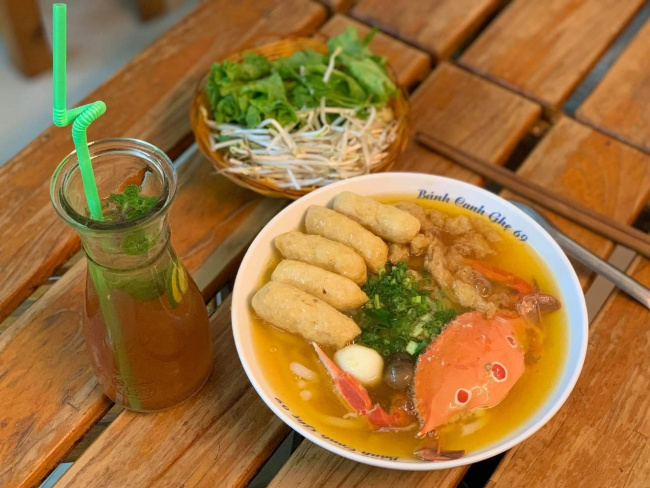 Craving crab cakes? Well, you’re in for a delightful surprise because this stall is known for one-of-a-kind crab cake soup noodles. The thick broth is flavourful and clings onto every strand of noodle. You can even opt to have an entire crab with your bowl of noodles if you’re looking for an extra sumptuous meal. Apart from its crab cake soup, the eatery offers other delectable seafood dishes such as squid, prawns and clams. What to order: Go — crab cake soup (VND50,000), nguyen con — crab cake soup with whole crab (VND100,000) 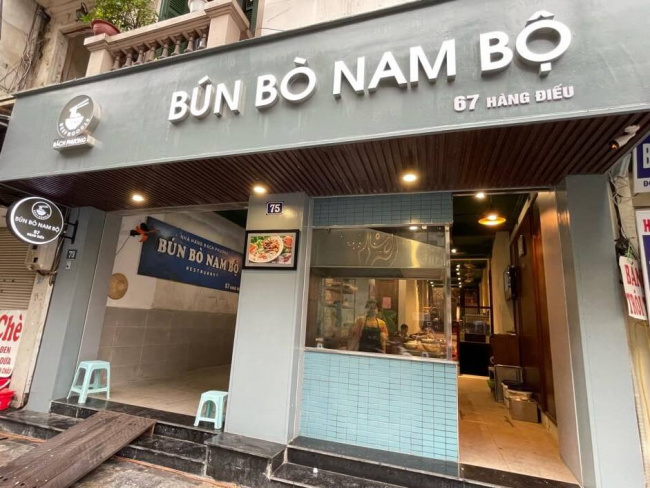 Like many other Vietnamese eateries, this stall specialises in just one dish, bun bo nam bo — southern Vietnamese beef noodles. Served with tender beef slices, lettuce, cilantro, peanuts, and noodles, diners are to mix the ingredients thoroughly before digging into this delicious bowl of noodles.

This place is popular with locals and tourists alike owing to its countless positive reviews, so don’t be surprised if it’s crowded. It’s probably worth the wait.