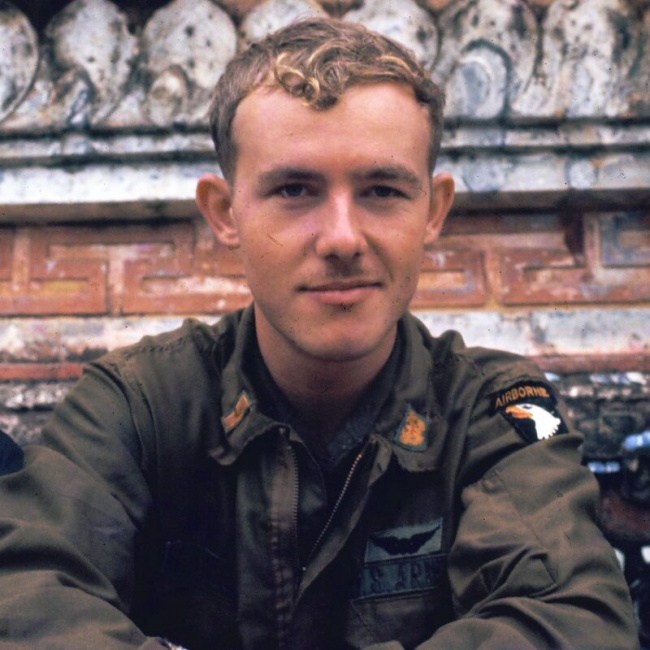 This old soldier explored the northern part of Vietnam on a return trip in 1992. Then, I took a train to the southern part of the country, where I’d flown combat missions during the Vietnam War. I visited Huế City, where I once departed for combat missions, and took a seat on a peace monument where I’d sat as a young aviator 20 years prior. I drove to the site of my old base, then went by boat to the tomb of an ancient Vietnamese emperor. I took a once dangerous highway out to Khe Sanh, one of the most highly-contested battle sites of the war. Then, it was on to Da Nang, Marble Mountain, and Hoi An before reluctantly heading home. Old soldiers may fade away, but before we do, we should revisit our past. 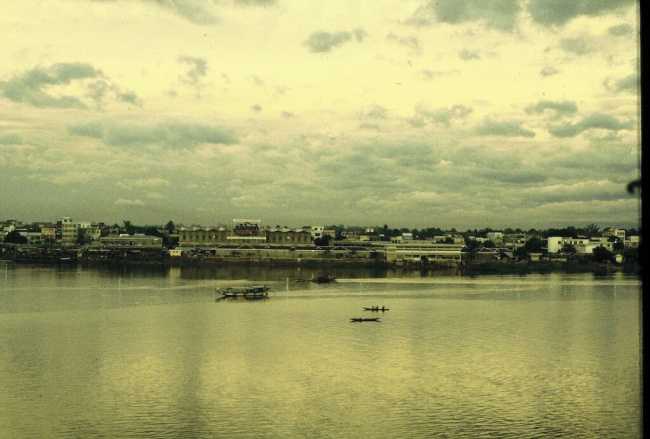 After 3 days exploring Hanoi and the surrounding area, I took an overnight train south to Huế City, a trip that lasted 14 hours. My guide Nhat and I arrived at the Huế depot at 8 a.m., and checked into the hotel near the Perfume River. When I’d flown over Huế during my combat tour, the old imperial capital of Vietnam had been reduced by the decay of neglect, and the decimation of war. As I rode through the beautiful old city in a cab, I was heartened to see a remarkable recovery of the ancient, storied home of Vietnam’s Đàng Trong and Nguyễn Dynasties that ruled from 1738 to 1945.

Pro Tip: For train travel south from Hanoi to Huế City, take the main terminal at 120 Le Duan Street in west central Hanoi. There are 8 trains per night, costing approximately $16 per seat, or $40 for a sleeper. The trip to Huế is about 14 hours. 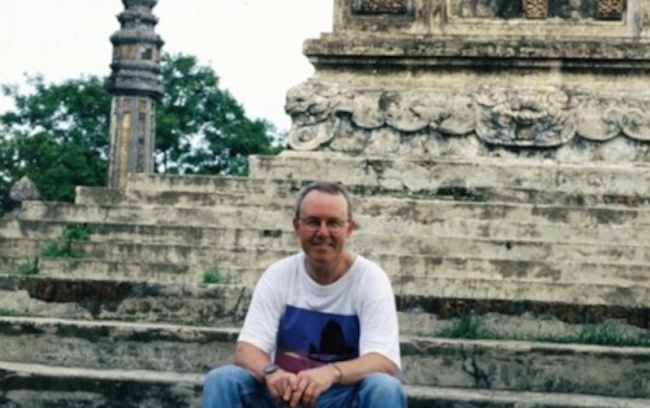 Byron back at Peace Monument in 1992 (Photo Credit: Byron Edgington)

The photo at the top of this article and the photo above were taken 20 years apart. The first in 1970, when I was a 21-year-old Army helicopter pilot. In the second photo, I’m a 41-year old tourist. The Monuments in Huế are UNESCO World Heritage Sites, and this one, along the Perfume River, is directly across from the old citadel where ancient royalty lived. Looking across the river, I couldn’t help recalling the many flying missions I was assigned that originated inside the walls of the old citadel. On my return visit, the site is once more a place of reverence and remembrance.

3. I Revisit My Old Base

The cab driver left Huế and headed southwest. We drove 20 minutes, and entered an area filled with old tombs. As we crept along, memories flickered in my head, and vague recollections filled in the blanks. This was the site of my old Army base. Called Camp Eagle when I flew from there during the war, the place had been returned to its old use as a cemetery, mostly for royalty. The buildings, sandbags, roads, and power poles the American military had erected there were long gone, either discarded, or sold off for whatever scrap value the metal could bring. Nhat told me that even the thin common wire that was once buried to connect every army unit on the mile-long base had been ripped up and sold.

Then, as we drove further on, in an instant, the view clarified for me as I sensed a strong connection to my past. I asked the driver to stop: I’d found it, the exact location of my old company site. The HQ building would have been there; revetments for the helicopters there; the officer’s club just over there. I envisioned where everything had been, the maintenance building, motor pool, and where my hooch once sat. The structures were gone. Walls torn down, their wood floors and tin roofs carted off, and the sacred tombs once more prevalent. My year-long tour in the war rushed through my head, and then quickly brought me back to that empty plot.

Nhat was waiting for my reminiscence to end so we could move on. Born exactly 9 months after I left Vietnam, Nhat and I had joked about the timing of his birth. I assured him I’d never met his mother, and in our easy conversation I knew that the young man viewed Vietnam much differently than I did. It was his country, a place where he’d grown up. I’d grown up there in a much different way, and my connection to Vietnam will always be fraught. Despite my mixed feelings about the outcome of the war, I was gratified to see that the Vietnamese had reclaimed their country. 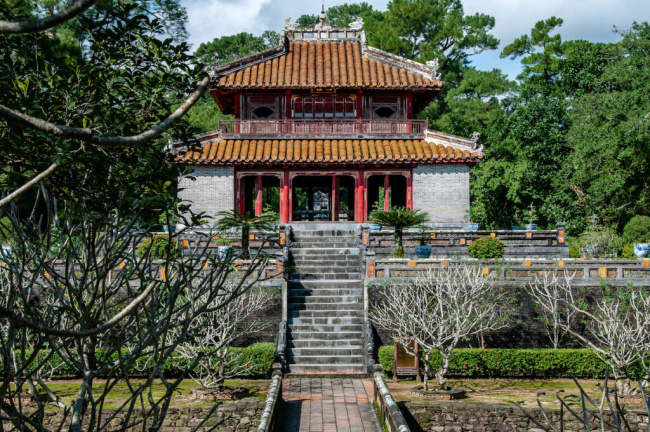 Nhat and I boarded a small boat in Huế, and headed 10 kilometers (6.21 miles) down the Perfume River to visit the tomb of Minh Mang, one of the emperors of Vietnam during the Nguyen Dynasty. Minh Mang governed southern and central Vietnam from 1820 until his death in 1841. The tomb and surrounding grounds are exquisitely preserved, despite years of neglect during the war. Walking the grounds, I looked upward wondering how many times I’d flown over this spot, with no interest in the significance it held for the Vietnamese.

A highlight of my return trip was the drive to Khe Sanh. On Highway QL-9, our driver took me past a number of places I remembered flying to and over: the site of an old firebase named Vandergrift; the so-called Rock Pile, where I earned the Distinguished Flying Cross after a dangerous rescue flight; Khe Sanh base and airstrip; and Co Roc Mountain, across the Laotian border a few miles away. Standing where the old airstrip was, as far as I could see, were coffee beans ripening in the misty sunshine of Khe Sanh. The site is now one of Vietnam’s largest coffee plantations. Since my visit, a museum has been built, and Khe Sanh hosts thousands of tourists each year to one of the war’s most heavily contested battle sites. There again, it was gratifying to see the reclamation of that once war-torn country.

Nearby, we visited a small Hmong village, where those rural mountain people live simple lives, foraging and getting by on the bounty of the land. Like everywhere I went in Vietnam, children gathered around offering soda, trinkets, crudely crafted “war relics,” and rice packets begging for money in their minimal English. With Nhat looking on, I visited the kids, knowing their future is, if not bountiful by American standards, at least free from conflict. Author with Hmong children at the Laos–Vietnam border; Nhat is in the background (Photo Credit: Byron Edgington)

Leaving Huế behind, Nhat, our driver, and I headed south on QL-1, the road that was once called the “Street Without Joy,” then across the Hai Van Pass, and into Da Nang. The now bustling city was once a leading entry and takeoff point for American GIs as Army and Marine troops filtered through Da Nang to duty stations north or south of it. Today, Da Nang is a leading entry point for tourists flying in from Hanoi or Ho Chi Minh City. Nearby Marble Mountain is a former US Marine Corps base, and the location of several quality hotels fronting beaches that are unsurpassed for beauty and enjoyment. 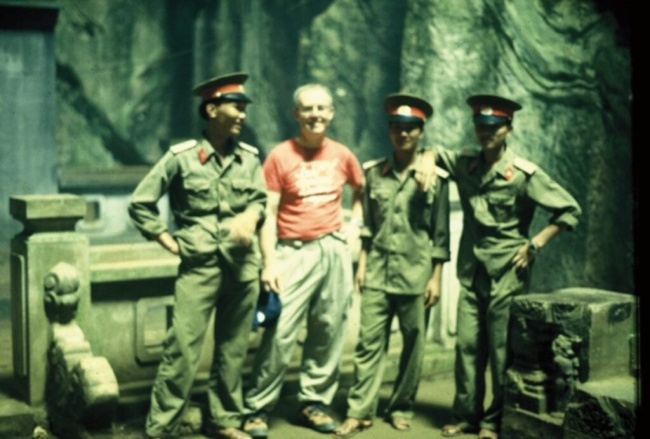 The “Marble Mountain” itself is, as the name suggests, laden with actual marble. Nhat and I scaled its slippery slope, and discovered a cavern at the top of the peak. Nhat explained that, during the war, the cave was the site of a field hospital for wounded North Vietnamese and Viet Cong soldiers. In the picture, I’m enjoying a visit with Vietnamese troops in the cave where their fathers might once have been treated for battle wounds.

7. Hoi An: A Hidden Treasure

Down the coast from Da Nang is the little village of Hoi An, one of the prettier, and least visited sites in Vietnam. We drove there in the afternoon, explored the beautiful hamlet, its signature canals, and varied architecture — from wooden houses to ubiquitous French-influenced structures and its Vietnamese so-called tube houses. Hoi An’s Japanese Bridge may be one of the most photographed structures in Vietnam. A covered bridge, it opened for use in 1593! We ate a wonderful meal at an outdoor café, and returned to the hotel near Marble Mountain by 9 p.m. Hoi An is a hidden treasure, not to be missed.

The first time I left Vietnam, on March 17, 1971, I cheered along with my colleagues aboard the World Airways flight from Cam Ranh Bay. On what we called the “Freedom Bird” that day, I couldn’t wait to get out of Vietnam.

When I left Hanoi in September of ‘92 aboard the Air Vietnam flight — bound for Kuala Lumpur and then home to the States — I felt an entirely different emotion. Vietnam will always have two meanings for me: the war, and a 2-week visit there that meant closure. For Vietnam veterans reading this, I encourage a return visit if you’re able. On my visit, the poisonous past had been buried, and the Vietnamese people treated me like another tourist from outside, welcoming me to their beautiful, exotic, and well-tended country.