Ba Na Hills near Da Nang, is a themepark that has become wildly popular due to Vietnam’s Golden Bridge. However, this is only one of the attractions that can be found here.

In the days of the French colonial era, the French settlers who lived in Da Nang looked for a place to escape the heat. In 1919, the current Ba Na Hills was chosen for this, where they built a hill station and resort, with villas, sports fields and restaurants. The settlers came here to the more than 200 villas to enjoy nature and the fresh mountain air.

Decades of wars left the resort abandoned, in disrepair and forgotten, until in recent years a number of developers from Sun Group wanted to revive it. An amusement park was built on top of the mountain, mainly with a French theme. You can now visit a French village that is surrounded by a medieval wall and there are French gardens and wine cellars. Around this theme, there are also attractions in Ba Na Hills, such as a Wax museum, Alpine Coaster and Fantasy Park including arcade halls and a number of temples.

In order not to let visitors to climb all the way to the top, a cable car was built that starts about 25 kilometers from the center of Da Nang. This cable car is listed in the Guinness World Records as the longest single-wire cable car in the world. Ba Na Hills only really became famous after building the golden bridge held by hands; photos of this have gone viral worldwide.

Is Ba Na Hills worth visiting?

It really depends on what kind of traveler you are, for many travelers it is a place that should not be missed during their trip through Vietnam. This is mainly due to the golden bridge. There are also many travelers who don’t like this at all, because there is nothing authentic about it, but above all a kitschy amusement park.

If you are staying around Da Nang for a longer period of time and looking for some entertainment, it is definitely worth a trip. It is also recommended if you travel through Vietnam with kids, because there is plenty for them to see and do.

If you really only want to visit the golden bridge, you could combine this with a quick stop during your trip from Hoi An to Hue over the famous Hai Van Pass. Make sure you start very early so that you have enough time to cover the beautiful coastal road and don’t forget that the golden bridge is part of the Ba Na Hills park and you first have to go up with the cable car.

How do you get there?

The most comfortable option to get to Ba Na Hills is by taxi (or rent a car with driver). The price from Da Nang is approximately between 350,000 VND and 500,000 VND, depending on the type of car and location in the city.

Rent a car here, including a driver.

Another option is to go on an organized tour to Ba Na Hills. Everything is pre-arranged and an English-speaking guide will lead you around the grounds, with plenty of time to take in the attractions. Check out our Ba Na Hills tour, both available in private tour and group tour or only transfer.

There are also buses from the Ba Na Hills theme park itself from Da Nang. It is best to book these at your hotel; prices are between 120,000 VND and 150,000 VND for a return ticket and 100,000 VND for a single ticket. If you are with a group, a taxi can be slightly cheaper. The first buses depart from 8am and the last depart around 4:30pm.

You can also rent a motorbike/scooter yourself in Da Nang or Hoi An. The price for a basic motor is between 100,000 VND and 150,000 VND per day. The way to it is not very difficult to find with Google Maps, but riding a motorcycle in Vietnam is only recommended if you have experience and are confident enough. No matter which transport you arrive, there is only one way to go up to visit the amusement park and that is with the famous cable car; the worlds longest single-wire cable car.

There are no fewer than 12 cable car stations, of which 3 are ground stations that take you to the top, each to a different part of Ba Na Hills. The three ground stations are Hoi An Station (05), Suoi Mo Station (08) and Toc Tien Station (09). There are 5 different cable lines that help you get to certain parts of the park. Both Hoi An station and Toc Tien station have an intermediate station before going to the top and Soui Mo Station going directly to the top. This may sound complicated, but the only reason there are multiple cable car routes is because the attractions are on two different levels.

Check out the Ba Na Hills maps below, so everything becomes clear.

Tip: Before you go up, it can be useful to see where you want to start, so that you can take the right cable car. For example, the best way to visit the famous golden bridge is via ground cable car station Hoi An. 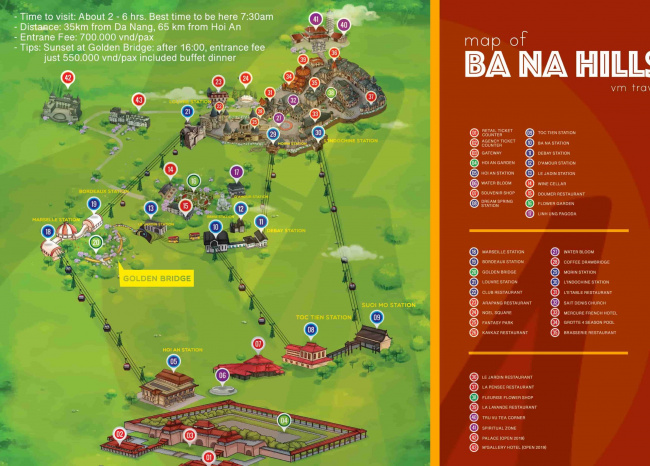 You can easily buy the tickets at one of the many boots at the entrance, but can also be ordered online via the Sunworld website, to avoid long ques on busy days.

The park is large and there are endless paths, stairs, courtyards and roads. While there are ramps and lifts in some sections, it can be difficult or impossible in many areas if you have limited mobility.

If you are traveling with large pieces of luggage, there is free luggage storage at Ba Na Hills. The storage facility has no size limit and is located on the right side of the counter. You will receive a card with a number on it and your luggage will be properly stored with room security. The luggage service desk is open from 8am to 9pm.

Attractions & things to do in Ba Na Hills

In addition to the impressive Ba Na cable car ride, which is part of the complete experience, there are plenty of attractions and fun things to do in Ba Na Hills. Below is an overview of the most popular attractions. 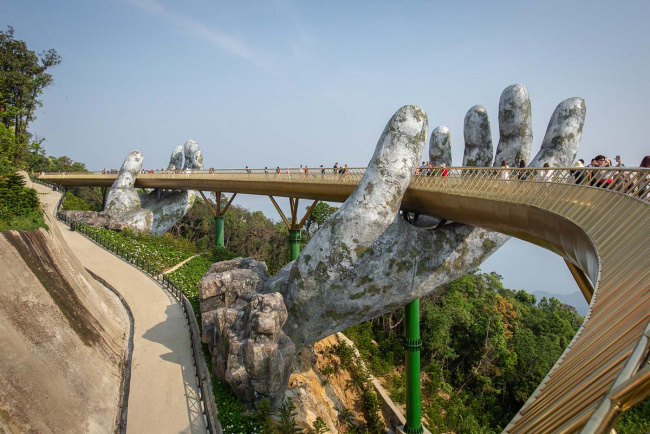 The most famous attraction in Ba Na Hills is the Golden Bridge carried by hands. Soon after the bridge was opened in 2018, photos went viral worldwide through social media.

The design of the Golden Bridge makes you feel as if you are walking on the hands of gods through the clouds. Just keep in mind that on busy days there are thousands of other tourists who want to take pictures here. If you want to avoid the crowds, it’s best to get here as early as possible or just before closing time. 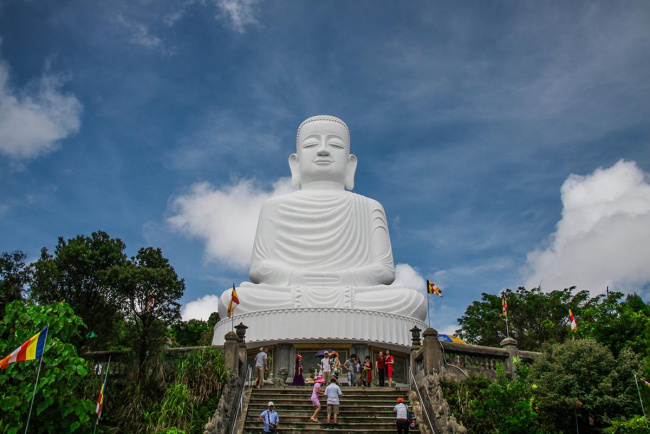 Linh Ung Pagoda is located at an altitude of 1500 meters from the sea level, where you can feast your eyes on a spectacular view of the hills of Ba Na.

The pagoda’s tiled roofs, dragons, lotus flowers, and Buddhist prayer wheels add to its beauty. There is also a 27-meter high statue of Buddha sitting on a 6-meter high circular lotus base. One of the most massive seated Buddha statues in Southeast Asia. It’s a peaceful escape from Fantasy Park below, so spend some time here to catch your breath. 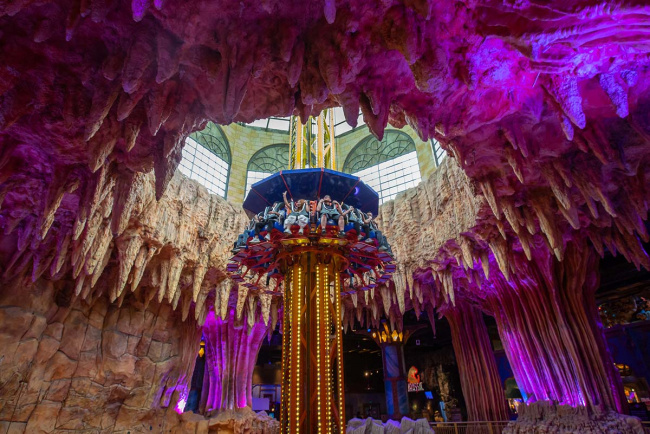 The Fantasy Park in Ba Na Hills is something completely different from the serene temples and gardens that can be found there. Here you will find the largest indoor video arcade in Vietnam, including many free games, rock climbing, a drop tower and various 3D, 4D and 5D cinemas. It is especially fun for children, but most of the attractions are also suitable for adults. There are 3 underground floors for games, each with its own attractions and themes. 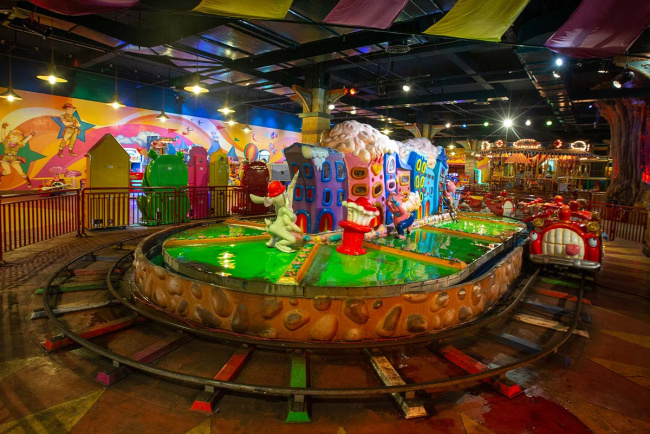 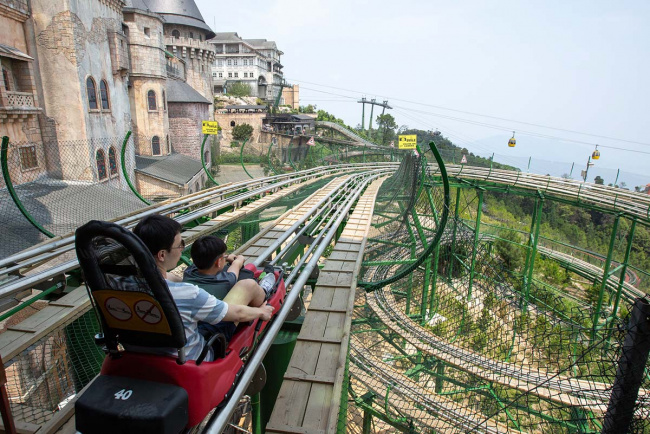 The Alpine Coaster is an individual or shared roller coaster cart with the potential to reach 40 kilometers per hour. Each cart is equipped with its own braking system if you want to slow down. The roller coaster doesn’t have to go fast if you don’t want to. You can use the brakes whenever you want. On the other hand, if you’re looking for record time, ignore the brakes altogether.

Entering the Fantasy Park through the main entrance, the Wax Museum will be on your left, with the largest collection of wax figures in Vietnam bearing a striking resemblance to several celebrities on Earth. It is not included in the Ba Na Hills ticket, you need to buy an additional ticket. 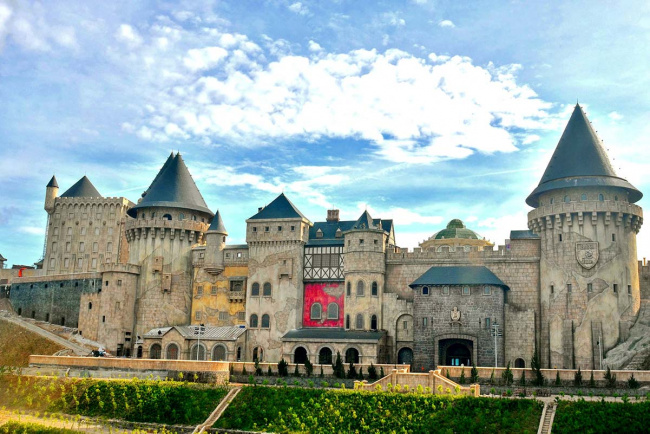 French village or so called ‘little Paris’ is the heart of Ba Na Hills where you will be amazed by the classical and contemporary architecture. The French Village is a recreation of a medieval French town. The village has a large square with fountain cathedral, restaurants and cafe and decoratated with flowers and vintage cars. Calming French music plays on the background. The flower garden of Le Jardin d´amour is famous for its nine romantic gardens with nine ways of architecture that give you the unique experience of exploring it. There is a vineyard that associates with the old French wine cellar, recreating the wine region of southern France. You can also play chess with giant chess pieces, take great photos and the flower gardens and get lossed in a maze of massive tree walls. The Debay Wine Cellar is the only and well-maintained work of the French. Built in 1923, 100 meters long, this cellar is buried deep in the rocky mountain. The temperature stays between 16°C – 20°C perfect for wine. The French used this to enjoy wine, food and dancing in the presence of natural air conditioning. A funicular is a train used in mountainous areas to go up and down slopes of varying degrees – and it always works in pairs. The carriage runs on rails and is raised and lowered with a cable by the counterweight of the other carriage.

The funicular at Ba Na is made by a Swiss company and is the only one of its kind in Vietnam. It transports visitors to and from the D’Amour Flower Gardens and Debay Wine Cellar area to D’Amour Station.

There are no fewer than 13 different restaurants spread across Ba Na Hills. The food ranges from local Vietnamese food, to western food, South American and Russian food. The prices in the restaurants are generally a lot more expensive than in the restaurants you find in the city of Da Nang. In can be wise to bring some snacks and drinks to save a bit from your budget.

Ba Na Hills is open all year round. The high season of Da Nang is from April to August. Around this period you will find the best weather, with lots of sun and little rain and wind. Many travelers come here to enjoy the beaches and take a day trip to Ba Na Hills. If you want to avoid the crowds, come between the months of September to March, but the weather in these months can be cooler and there is a much more chance of rain.

Like other theme parks around the world, Ba Na Hills also hosts festivals.

If you want to stay in Ba Na Hills itself you have an option and that is the Mercure Danang French Village Bana Hills. It is located in the middle of the French village. The rooms are nicely decorated and modern and the prices per night start from 3,000,000 VND (130 USD). The biggest advantage of staying here is that you can see the park when all the tourists are gone and be the first to see everything in the morning. But other than that there are few other reasons to stay here. In addition, many attractions and restaurants are closed after 5 pm, so you can only eat in the hotel restaurant, which can be pricey. There are also plans to build a new hotel in a quieter location.