A visit to Vietnam is not complete without eating bun cha – a lot of bun cha. Should you ever be lucky enough to be in Vietnam’s capital Hanoi, there’s no escaping the smoky smell on every street corner. The tastiest and best places to eat bun cha are often at the unnamed street food stalls. If you want to follow in the footsteps of food hero Anthony Bourdain and President Obama, take a trip to Bun Cha Huong Lien, also in the capital.

What is Bun Cha?

Bun Cha is mainly a famous street food in Hanoi and northern Vietnam, but can also be found in other parts of the country. Bun cha is also originally from the Vietnamese capital, but you can find similar dishes all over the country, such as bun thit nuong in Ho Chi Minh City.

In Hanoi you can find Bun Cha from elegant restaurants to simple street vendors in small local streets. The dish, along with Pho, is Hanoi’s signature dish. It has the perfect combination of meat, noodles, vegetables, herbs and local special dipping sauce.

Bun are the vermicelli noodles that are served on a separate plate. Almost every Vietnamese dish has its own style of noodles, so the noodles of Bun Cha are also different from the ones you find in a bowl of Pho. Bun Cha noodles should be thin, soft and chewy.

Cha is the meat served in a bowl. The meat is made from pork and is cooked in two different ways: Ground prk (cha vien) and grilled think sliced pork (cha mieng). 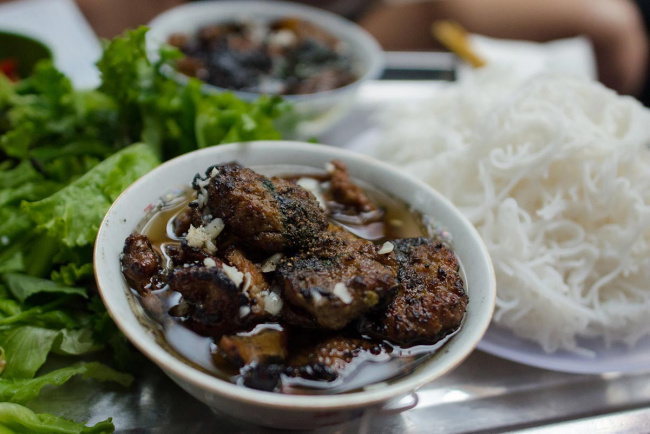 The meat is served in a sweet and sour soup, to which the meat gives off a smoky taste. In addition, there is a plate with fresh herbs, shisho leaf, lettuce and the thin rice noodles. The fresh herbs and shisho leaf can be added to the soup for extra flavor, where you dip the noodles briefly before eating them.

When and how to eat Bun Cha

Bun Cha is originally a meal eaten with lunch and today is still the time when most Bun Cha restaurants are full. However, most restaurants and street food stalls are open from early in the morning until late at night, so you can eat it at any time of the day.

There are also two different ways to eat Bun Cha: the northern and the southern way. The northern one is the simplest and when you eat it in Hanoi you can just follow the locals. All you have to do is dip all the ingredients into the soup and eat it just like a bowl of Pho.

In the south it is popular to roll everything up in a large leaf of lettuce, or to make a kind of spring roll out of it. So you wrap the meat, noodles and herbs in lettuce and then dip it in the sauce.

Bun Cha is a food from Hanoi and also very popular here, so it goes without saying that you can eat the best Bun Cha in Hanoi. That said, many people from the north of Vietnam have moved to Ho Chi Minh City and have taken their local dishes with them as well. Ho Chi Minh City therefore has the greatest diversity of food in the country and the Bun Cha is also delicious here. It is true that tastes are often adapted and can differ from north to south. In the north you will find the most original Bun Cha, but that does not mean that this taste suits you best.

Keep in mind that some of the best places to eat Bun Cha are at unnamed street food stalls in small alleyways. Below are a few places that are a bit easier to find, where you can eat the best Bun Cha in Vietnam. 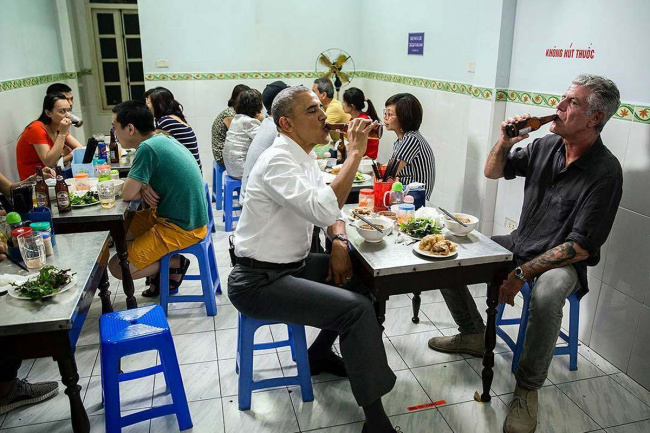 The most famous Bun Cha Hanoi you can find is at this restaurant. It was here that former President Obama, together with Anthony Bourdain, came to eat Bun Cha at this place during his visit to Vietnam.

This small restaurant on the street of Hang Manh is one of the most popular places to eat Bun Cha Hanoi for tourists. Especially during lunch it is completely full here and it can be difficult to find a place. This Bun Cha restaurant in Hanoi has been there since 1965.

Despite this eating spot being right in the tourist center of Hanoi Old Quarter, the price of the delicious Bun Cha they serve here, is reasonable for around 2 USD.

Despite the fact that this Bun Cha stall is located in an alley, it is extremely popular among the locals. And when the local Hanoians come here, you can be sure that they make one of the best Bun Cha in Hanoi here.

Bun Cha Ho Guom is the place which has the most similar taste to the original bun cha from the capital. This is the reason why many bun cha lovers in Saigon usually come to this eatery to experience the taste of Hanoi food. The location is in District 3, right in the heart of the city which makes it very easy to find.

If you are new to eating street food in Vietnam, it might be a little exciting to just sit down at a street stall and order something. After all, is it safe to eat there and how do you communicate with a street food vendor what you want if you don’t speak Vietnamese yourself?

A great introduction to Hanoi’s street food scene, where you will taste Bun Cha, among other things, but also learn more about the Vietnamese people and insight into the local culture, is with our Hanoi Street Food Tour. It is also one of the best things to do in Hanoi!

You will be taken around the small hidden streets, your local guide will tell you about the history, present and unique culture. Along the way, sample different dishes from only the best street food vendors that only the locals know about.

If you don’t mind skipping Bun Cha, you can do similar tours in other cities in Vietnam, such as our Street Food Tour in Ho Chi Minh City.

How to make your own Bun Cha

Not planning a trip to Vietnam? Don’t panic, we have a recipe for you. You get the best results with a barbecue, but you can also just use a pan.

This bun cha contains meatballs. Usually you also get pork belly, pork tenderloin or other pieces of pork. Do you also want to go all out? Then marinate these pieces of meat in the ingredients you use for the minced meat, and then put it on the barbecue.

Place the sugar with the water in a small saucepan and cook over high heat until you have a brown caramel sauce, about 5 minutes. The water should not be reduced completely, you can also add a little extra water at the end, otherwise the caramel will become too hard and you can no longer mix it properly with the balls.

In a large bowl, combine the rest of the meatball ingredients and caramel sauce you made in step 1. It is best if you let it marinate for an hour (or 2), but in principle you can also start making meatballs right away.

Meanwhile, make the broth by mixing all the ingredients in a bowl.

Make meatballs from the mixture, about 16. Barbecue the meatballs until crispy and caramelized on the outside, and cooked through but not dry on the inside. No BBQ? Heat oil in a pan and add the meatballs when it is hot.

Make sure there are not too many meatballs in the pan, you should have enough room to turn them occasionally. If there are too many in the pan at the same time, a lot of moisture is also released, causing the balls to boil instead of baking (= less crispy). Bake them for about 8 to 10 minutes, making sure all sides are nice and crispy.

Put whole leaves of lettuce and fresh herbs together in a bowl and put the noodles in a separate bowl. Divide the meatballs among 4 ramekins and pour the soup over them. Dip the noodles in the sauce and eat with the balls, lettuce and herbs.