About 90 km northwest of Ho Chi Minh City in Tay Ninh, you will find one of the most special temples in Vietnam. The Cao Dai temple complex is the sacred building of a religion that has not been around for very long. The faith originated in Tay Ninh around the year 1926 and gained its followers mainly in South Vietnam. Nowadays you can also find Cao Dai temples in the United States and other countries. You will also come across a Cao Dai temple more than once in other cities, especially in the south of Vietnam. The temple in Tay Ninh is nowadays also popular with day trippers from Ho Chi Minh City.

Caodaism is a special faith that originated in 1926 in Tay Ninh in southern Vietnam. Followers of Caodaism believe in the existence of one God, so-called Monotheism. In addition, people have tried to create the ideal religion by combining things from multiple faiths. In the faith you will find many elements of Asian religions such as Buddhism, Confucianism and Hinduism, but also of Islam and Catholicism.

The large temple was built between 1933 and 1955 and a Cao Dai army was even established to fight against the Japanese occupiers during the Second World War. After the war, the Cao Dai army was abolished by Prime Minister Diem and the leader was exiled. After the communist takeover in 1975, the Cao Dai faced oppression again before their religion was officially legalized in 1985.

The faith is still most strongly represented in the Mekong Delta and has between 2 and 7 million Vietnamese followers. You can also encounter Caodaism in countries such as Australia, North America and Europe. All clergy are vegetarian and celibate. At the head is a Pope and the higher clergy are all male. Among the lower clergy you will also find many women. The design of the buildings is fairly uniform and various symbols are used. The temple in Tay Ninh is one of the largest in the country. 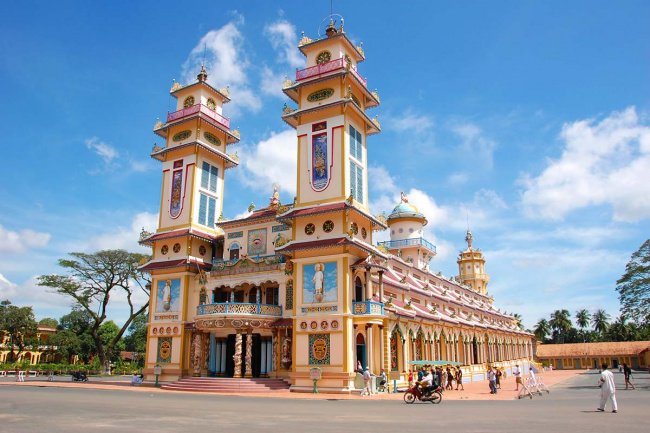 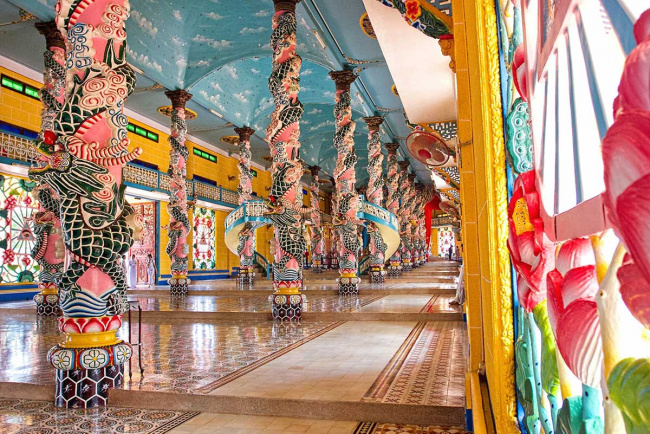 The Cao Dai Temple is a bombastic and colorful building, where hundreds of worshipers flock daily in fluttering white robes. The Cao Dai temple can be recognized by a large eye on the facade and two square pagoda-style. The outside of the main temple appears to be sagging, but that is an optical illusion caused by the stairs leading up. Despite the fluorescent colors and rococo excess, this ostentatious building somehow manages to transcend the tackiness. Inside, statues of Jesus Christ, Buddha and the Hindu god Brahma stand peacefully side by side. The most common motif in the temple, the eye, is encompassed by a triangle, like that found on a US dollar bill. 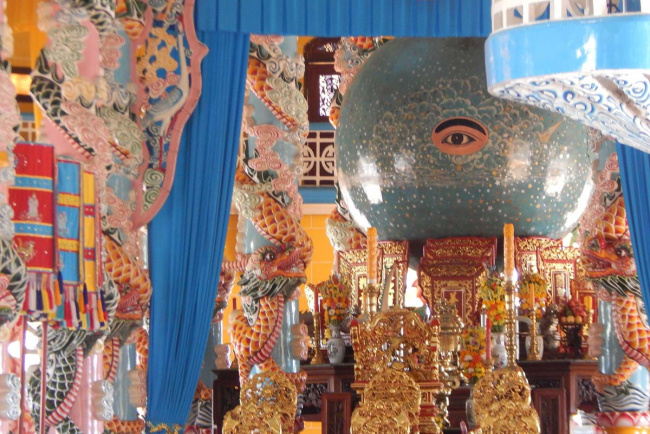 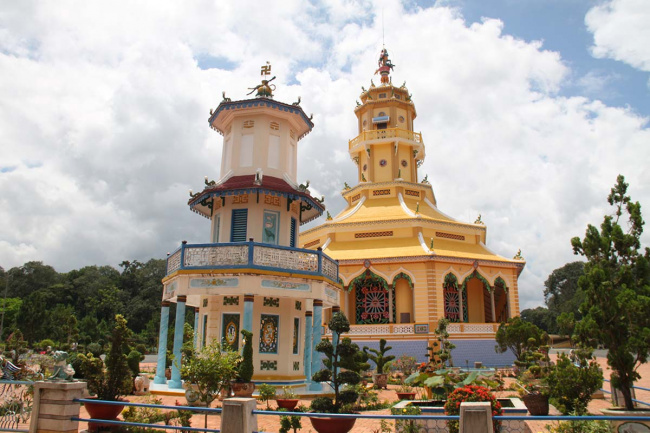 The complex where the temple is located is also worth exploring. You will find several smaller sacred buildings, houses for the devotees and there is a special homeopathic hospital that attracts people from all over Vietnam. Inside the Cao Dai Temple, you are allowed to walk as a tourist, as long as you stay on the aisles and don’t venture between the rows of pink Corinthian pillars with green dragons that crisscross the space.

Ceremony at the Cao Dai Temple 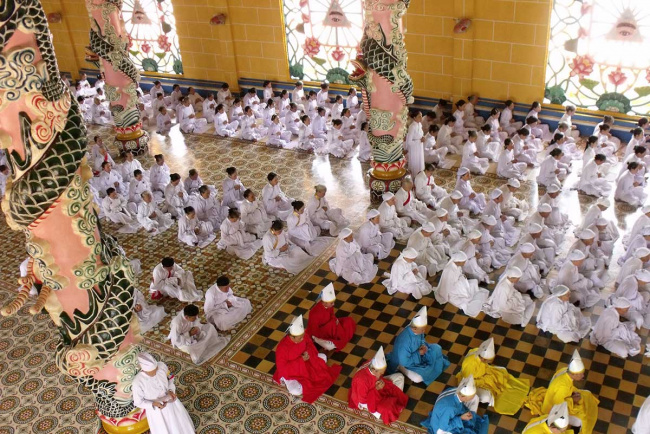 Attending a prayer at the Cao Dai Temple is one of the absolute highlights for many visitors. This is a very photogenic spectacle. The priests are the most photogenic: they are dressed in yellow, red and blue, the followers wear white robes. The men sit on the right and the women on the left in orderly rows during prayer. During prayer, “the eye” is worshipped. The sacred eye symbolizes god and has the Ying and Yang icon in the pupil. 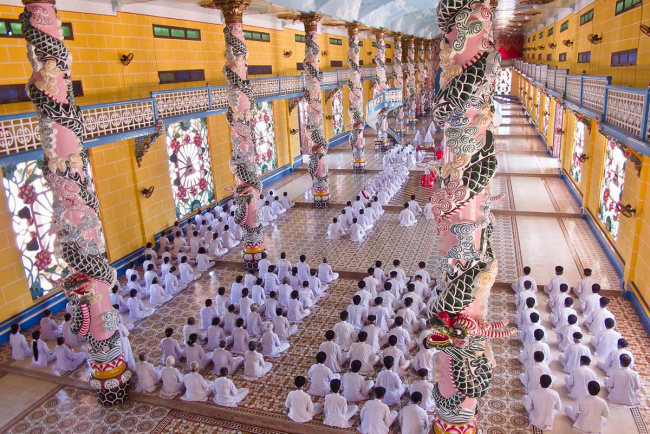 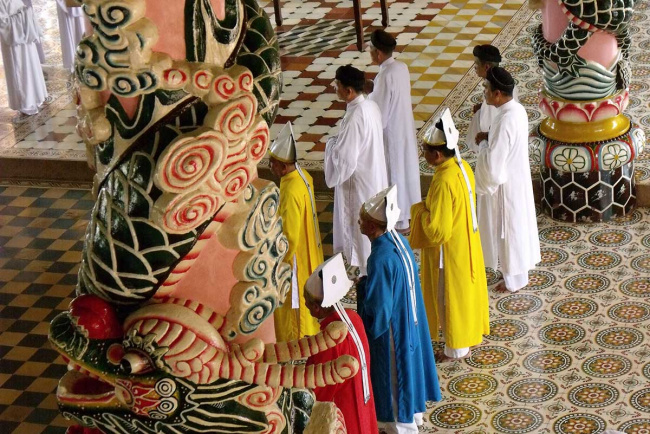 Attending a ceremony in the Cao Dai temple is possible at fixed times; 6 o’clock in the morning, 12 o’clock and 6 o’clock in the evening. Before the service you can walk around yourself, during the ceremony you can only stand on the balcony and view everything from above. You are allowed to take pictures, but you must be quiet during the service. In addition, you must dress decently and leave your shoes outside in a specially designated place.

Combine with a visit to the Cu Chi Tunnels

Most tourists will visit the Cao Dai temple in combination with a tour to the Cu Chi tunnels. Tours depart from Ho Chi Minh City early to visit the tunnels and then attend prayer at 12 noon. Few tourists visit the temple on their own. If you want to do this, it is best to agree a fixed price with a taxi driver or someone from Grab. It is then nice to combine a visit to the temple with the Ba Den Mountain. You can optionally stay at the Vinpearl Hotel Tay Ninh. After visiting the temple you can relax by the pool, with spacious and modern rooms.

The Cao Dai Temple near Ho Chi Minh City (in Tay Ninh) is not the only Cao Dai temple in Vietnam, but it is the biggest. You can a lot more Cai Dai temples in Vietnam, but most of them in southern Vietnam and then central Vietnam, including Da Nang, Phu Quoc and the Mekong Delta.