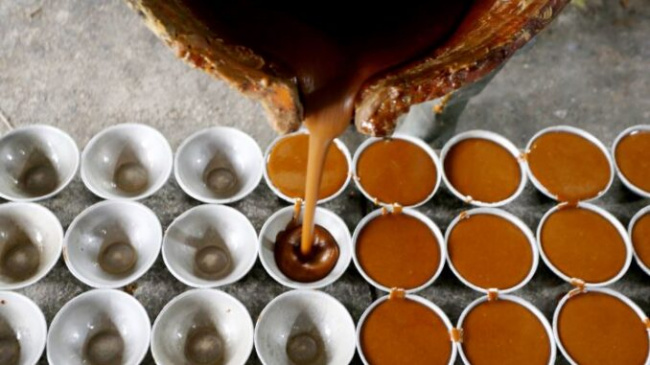 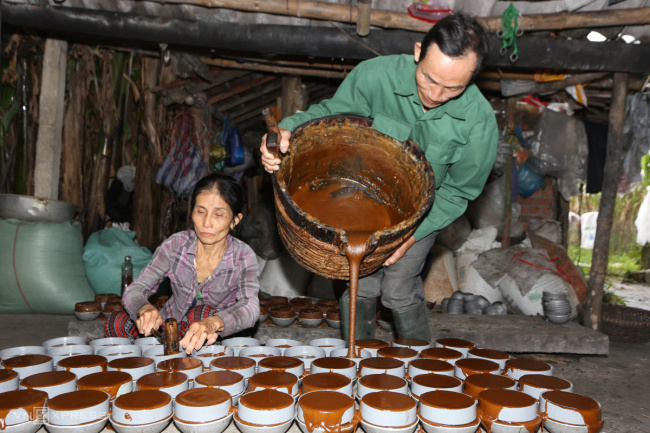 These days, the sugar bowl production facility of Mr. Nguyen Van Nhan, 63, is located on the side of the inter-commune road that is constantly red. Previously, there were 5 kilns in the village, now he is the only one who follows his father’s profession. Brown-yellow sugar, poured into the bowl by the worker, should be called bowl sugar. 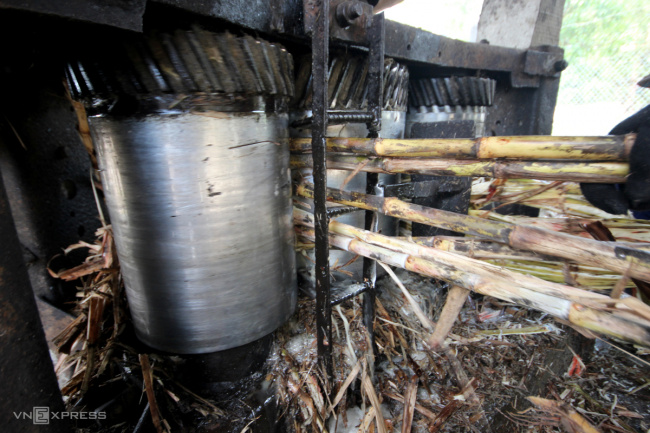 Mr. Nhan presses about 7 tons of sugarcane every day, the water is filtered to remove the residue before being put on the stove to cook. In the past, he had to use human strength and cow’s strength to do it manually, now he has invested in a press of 150 million VND, so it is less difficult. 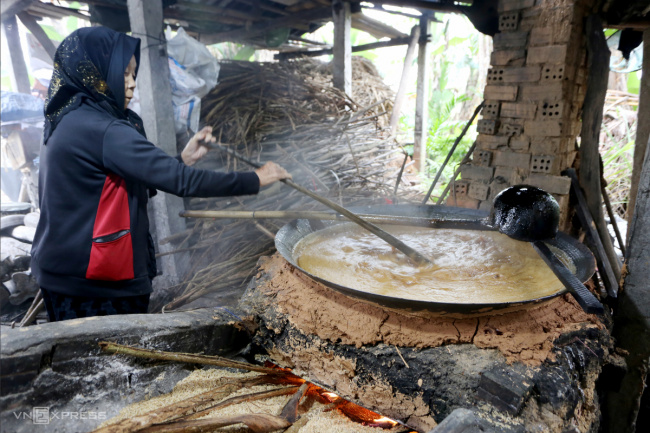 Sugarcane juice is brought to a boil in a cast iron pot. To remove the sour substance, Mr. Nhan added a little lime to eat betel nut mixed with water and poured it in at the rate of one pot of sugar water and three tablespoons of lime. This is the secret of sugar bowl production, without lime it will not be delicious. 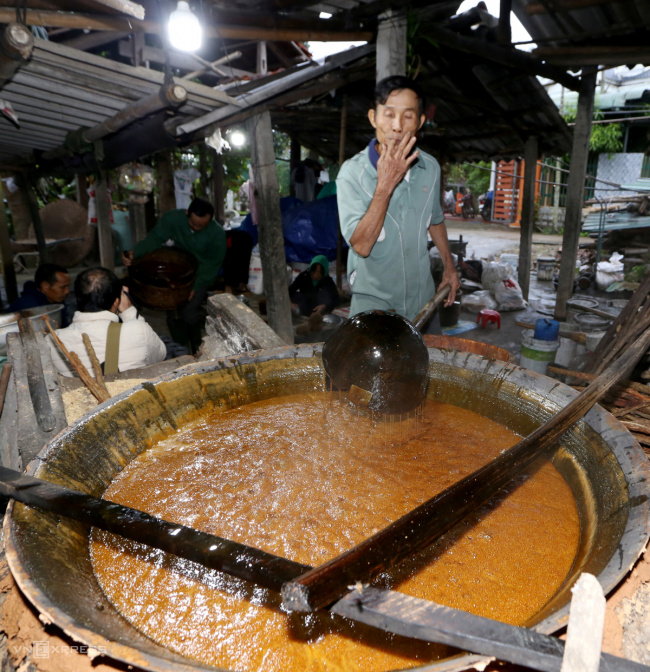 After an hour of cooking, sugarcane juice boils at high temperature to form a thick young sugar. Mr. Nhan tested the finished product, if the taste is sweet, then the sugar has reached quality, turn off the stove. The thick sugar water is poured into a barrel made of jackfruit wood, then a wooden pestle nearly one meter long begins to beat. Mr. Thai Quang Hai, 49, with 20 years of experience, said the job requires constant manual work. When the sugar pot is finished cooking, quickly beat to pour into the bowl while it is still hot, if left to cool, they solidify. After 20 minutes, use a pestle to beat continuously, the sugar water is even, concentrated and flexible. Sugar is poured into each bowl. In order not to stick, each bowl is previously coated with cooking oil. Previously, workers used earthenware bowls but now switched to aluminum due to fast and durable heat dissipation.

To complete the sugar bowl, the craftsman has to pour it twice. When filling the bowl for the first time, stop to let it cool. Use a wooden hammer to knock in the middle to create cracks. This makes it easier to smash the road later. The second time pouring a round rim on top makes the sugar bowl more beautiful. After removing the sugar from the bowl, it is put in straw to keep warm. Mr. Nhan’s kiln has four workers each day, producing nearly 1,000 sugar bowls. After paying the salary of 400,000 VND per person and other expenses, Mr. Nhan has about 1.5 million VND per day.($1=24,000 VND) Before selling, the owner of the establishment used straw rope to tie two bowls together, priced at 60,000 VND/pair. In Quang Nam, people use bowl sugar to make offerings to Mr. Tao, to process dishes such as tote cakes, explosive cakes, little thorns cakes, sweet sticky rice, and tea dishes.