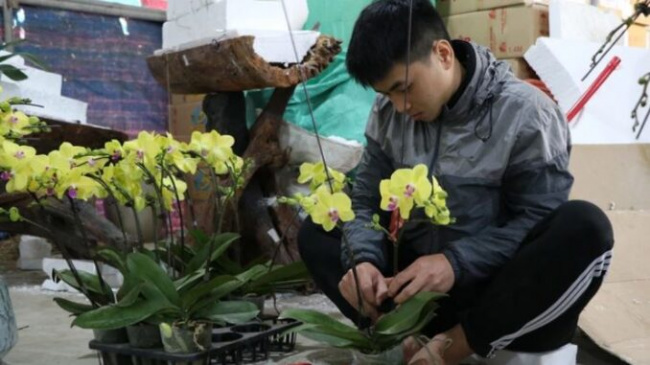 With half a month left until the Lunar New Year 2023, the flower market in Nghe An is bustling with sellers and buyers. Orchids have even been active since late November, or early December. At the orchid shops, crews are busy working to deliver goods to customers. 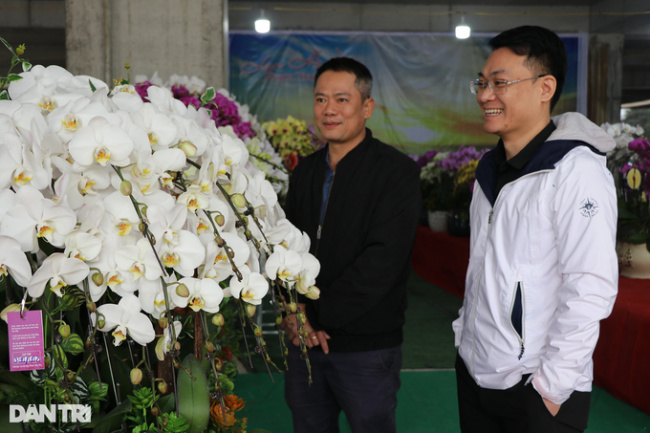 The orchid market in Nghe An has been bustling since early December.

Ms. Pham Thuy – owner of a well- known orchid business in Vinh City (Nghe An) said: “Orchid planters are not lacking, but it is not easy to find good and beautiful workers. In Vinh City, workers must be invited from other provinces such as Ho Chi Minh City, Hanoi, and Da Lat, etc. Wages paid for orchid planters are calculated by branches/pot, each branch is from 15,000 to 30,000 VND, depending on skill and prestige. of workers”.

Thuy’s facility hires 6 flower arranging workers from the southern provinces, including 4 main workers and 2 assistant workers. This is a group of workers who have been working since last year. Of course, in order to invite the team leader who is an international certificate holder, in addition to the salary of 30,000 VND/branch, according to Ms. Thuy, the condition also lies in the harmony and trust between the two sides. 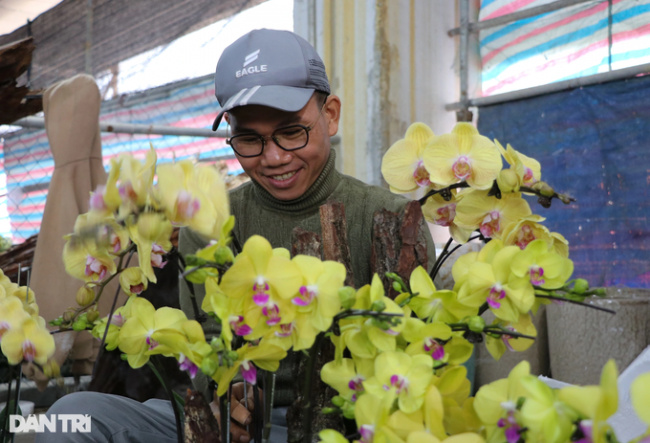 The florist was invited by the owner of the orchid business from Ho Chi Minh City, Da Lat… to come out.

Orchid arrangers start working from the beginning of December and usually finish work around 25-27 Tet. “The cost to pay flower arrangements for Tet holiday is also about 500-600 million dong,” Thuy revealed.

From Ho Chi Minh City, Mr. Nguyen Thanh Vu (37 years old) went to Nghe An at the invitation of the owner of an orchid business. With 7 years of experience in the profession, Mr. Vu is considered a good worker, careful, meticulous, responsible and especially rich in creativity. 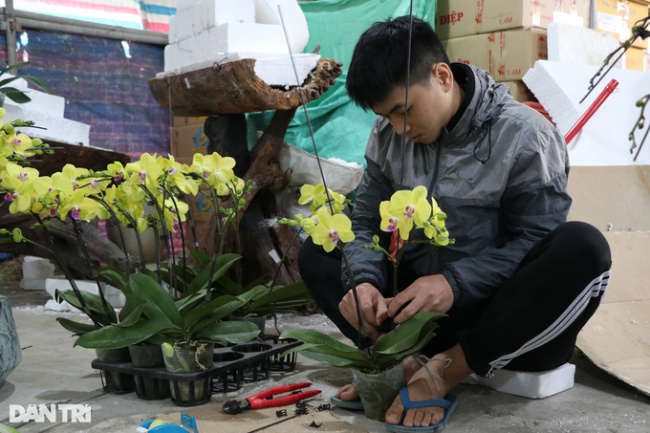 “In this profession, talent only accounts for a part, the most important thing is still the responsibility to the work and the spirit of constantly learning. The trend of flower arranging and playing flowers is different every year, if workers don’t work hard to learn, they will never stop learning. To do this job can not be stereotyped, rigid but must always innovate, create, explore to show the best beauty of orchids, in accordance with the increasingly high aesthetic requirements of customers.” , Mr. Vu said. 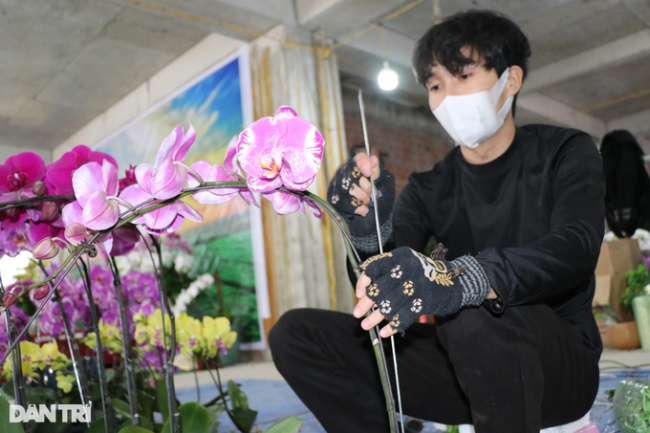 The work of the orchid arranger usually starts at the end of November of the lunar calendar and ends around the 25th of Tet.

According to Mr. Vu, florists often work in groups, group members must understand and have good coordination. Workers are divided into two groups: Workers “radiating” and workers “uppering”. The “raying” stage is for sub workers. Their task is to fix the “ray” ( flexible steel bar – PV ) to the orchid stem, bending the flowered part into an arc so that the beauty of the flower is displayed to the fullest. 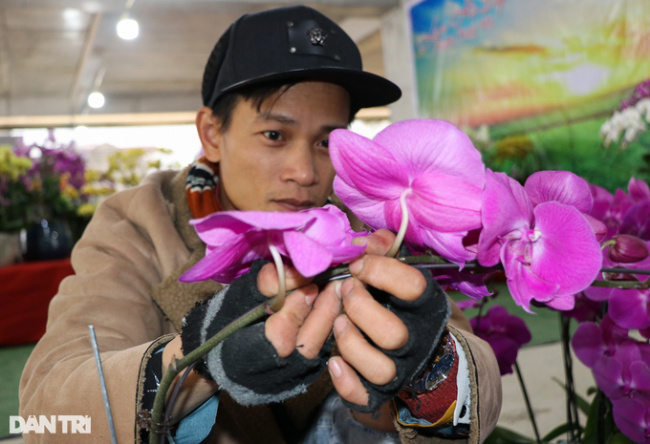 As a student at a university in Hanoi, on vacation waiting to graduate, Pham Van An (from Nghe An) enlisted to work part-time. There was a time when Mr. Vu went to Hanoi to arrange flowers for an event, so An asked to join the group to earn money to spend Tet.

An’s job is to “ray” and help the main workers in the group. On average, An earns from 500,000 VND to 1 million VND per day. Compared to other part- time jobs , this is a desirable income for a student during the Lunar New Year.

From the orchid branches that have “rayed”, the main worker will perform the “up to the vase”, that is, grafting the orchids together, arranging into a complete vase. 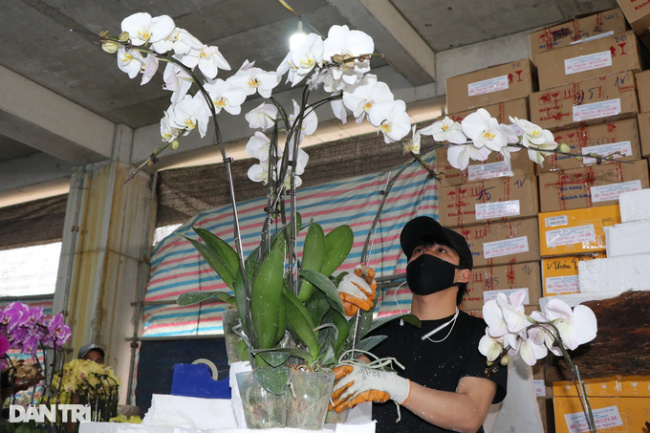 “It sounds simple, but to have a beautiful orchid vase is a labor process in both mind and hands. It is not simple to arrange each orchid in turn on the vase, but the worker has to sketch it in his head. The layout, the shape of the vase, to ensure the aesthetics and high artistry, show off the beauty of each orchid,” shared Mr.

The value of orchids can reach hundreds of millions of dong. Therefore, the requirements for beauty, uniqueness and harmony are higher. Workers have to put their mind, care and meticulousness into each petal, because there are customers who are fastidious and idealistic, a petal that is accidentally broken or dropped during the finishing process is also rejected because of concern. fear that it will bring bad luck in the new year. 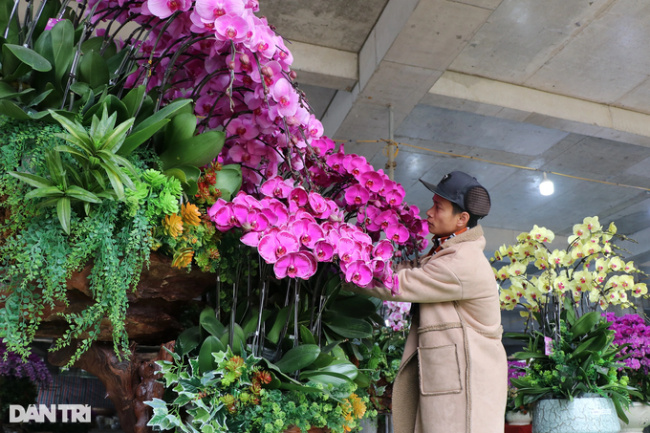 Florists are responsible for their profession and for their customers, often not following the quantity, but promoting the art and aesthetics of each work.

In addition to plugging orchids into ceramic vases in the traditional way, each craftsman will have his own creations such as using driftwood or adding decorative objects as accents for the vase.

According to Mr. Vu’s revelation, on the occasion of the Lunar New Year, especially during the peak days, from December 20-25, it is not uncommon for florists to earn an income of 5-7 million VND/day, even even higher. With senior florists, self-respecting professionals and responsibility to customers, income is not the most important thing for them. 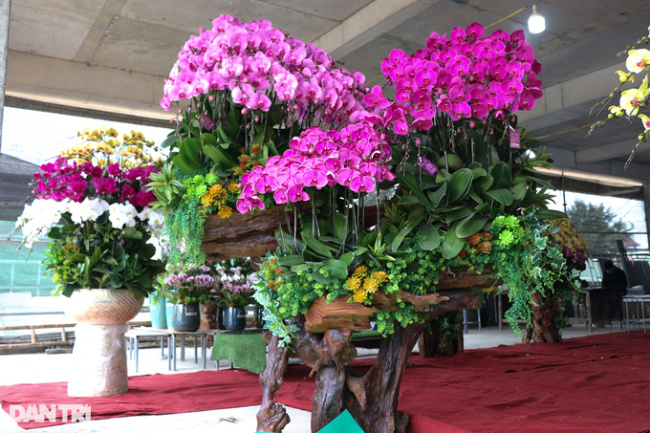 Each flower vase is the enthusiasm, creativity and responsibility of the craftsman.

“Money, of course, everyone needs, but when I do a job, live with it, quality and prestige are the most important things,” Vu said.