The town of Dong Van in Ha Giang is nestled between towering rocky mountains in the far north of Vietnam. It is a great stop during the famous Ha Giang loop, because there is plenty of accommodation and restaurants available. In addition, in and around the town you will find some of the most stunning sights of the province, such as theDong Van Karst Plateau Geopark, Old Quarter and the Sunday minority market.

Things to do in and around Dong Van

The biggest highlight of Dong Van can only be seen one time a week, on Sunday. It is the Dong Van Sunday market. The market can be found near the Old Quarter and the peak hours to visit are from 5:00 AM until 10:00 AM. When you visit there in the early morning you can also opt for having a breakfast over there, as there is a whole part of the market dedicated to food stalls. 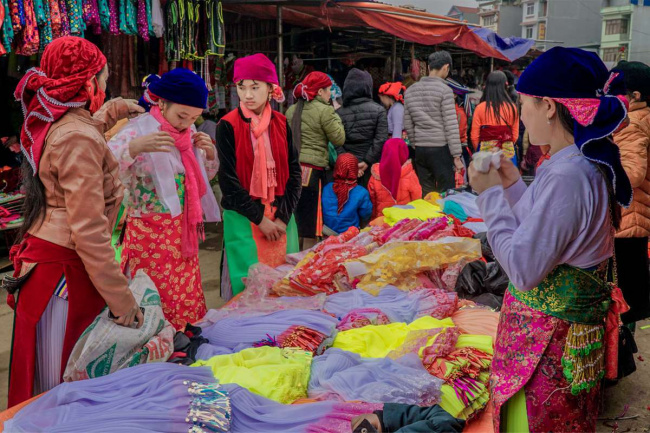 The Dong Van market is extremely colorful as all the female minorities dress up in their most colorful costumes. The ethnic people of the area, such as the Hmong, Tay, Nung and Hoa, come here to sell their goods. That could be anything, from clothes to farm equipment and from simple house hold goods to phones and chargers. There are often a few games that can be played and people getting a hair cut right on the street on the market. There are also animals on the market such as cows, buffaloes, ducks and chickens, but also small pigs and dogs that people use to sort of show off.

The Old Quarter is the historical center of the city. This part of the town is surprisingly cozy, for a town so far away from everything and not being as developed. Around the square you will find a lot of old houses dating back from the French colonial times that are now being used as small restaurants and shops to cater mainly the travelers. The houses have many influences from Chinese architecture; two-story houses with yin and yang structured roofs decorated with red lantern. 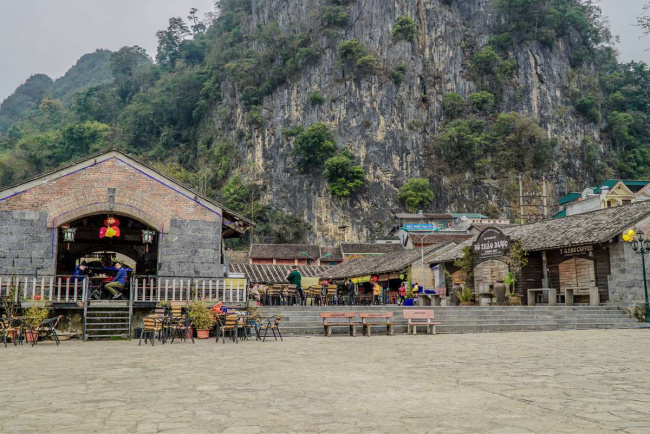 There are about 40 houses in the Old Quarter that are over a 100 years old and one house is even more than 200 years old. If you stay overnight in this city, make sure to visit the Old Quarter in the evening, as there is great atmosphere with people sitting at the small restaurants and the houses are beautifully lit.

On a hill behind the city is an old French fort, the Don Cao fort, built in 1927 during the French colonial time. Those who take the effort of climbing the steps to the very top of the fort will be rewarded with beautiful 360 degree views over the Dong Van town and its surroundings. Do not try and take a bike up, because some parts are very steep and narrow.

Directly outside Dong Van lies the Stone Plateau, an alien landscape with razor-sharp rocks created by the elements. The 2300 km² limestone plateau was recognized by UNESCO in 2010 as the first geological park in Vietnam. There are also fossils that are millions of years old. The area stretching across of 4 districts in Ha Giang: Dong Van, Meo Vac, Quan Ba and Yen Minh. 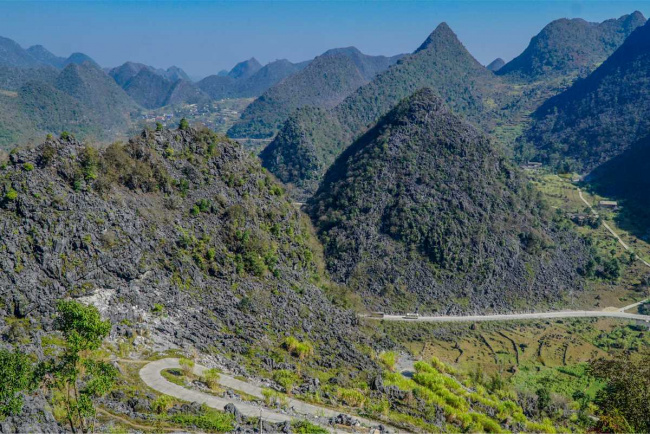 The Dong Van Geopark is a collection of mountains, breathtaking mountain passes, hidden mountain villages, minorities, rice fields, rivers and much more beauty. Around 80% of the area is covered by limestone, with some huge mountains and deep canyons. Some of the mountain passes worth mentioning are the Tham Ma pass and the Chin Khoanh ramp. You find these on the route while driving from Ha Giang City to Dong Van. 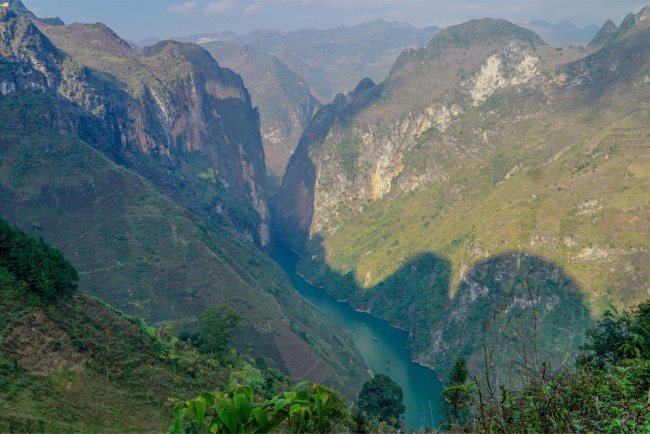 The 25 km road from Dong Van to Meo Vac is one of the most spectacular routes in the country. The road crosses the Ma Pi Leng pass (1500 m). In clear weather, the view from the top of the mountain slopes and river is sublime. The slopes here are so steep that it is almost impossible to imagine people working there

The village of Lung Cu is located 30 km from the city. There is a huge flag pole, called the Lung Cu Flag Tower, that indicated the most northern part of Vietnam. You can walk to the top of the flag pole to see the countryside of Vietnam on one side and on the other side you will see the mountains of China. The best part is perhaps the stunning scenic road going from the city to Lung Cu, with some of the most impressive mountains in Ha Giang.

Hmong King Palace is just 15 km from the city in Sa Phin Valley. With the consent of the French colonial rulers, Chinese tradesmen built a wooden palace in 1902 for the Hmong King, who dominated large parts of the province Ha Giang. Now this over a 100 years old palace can be visited.

Trekking through the mountains

Dong Van district, including the areas around Lung Cu, and the Geopark, are one of the best areas for trekking in Ha Giang. The mountains are some of the best in Vietnam and the variety with villages of local minorities and rice fields makes a long walk interesting.

How to get to Dong Van

From Ha Giang City it is 140 km to Dong Van town, you just have the follow the QL4C. Although there are local buses available it is strongly not recommended to use them. The best way to go is either by motorbike or private car. You can jump on the back of a motorbike of an experienced guide that can show you all the best places you have to see. You could also rent a motorbike yourself, although be aware that traveling through the steep mountains and winding roads is not without danger and without the right paper work you are not fully insured in case anything happens. For more comfort you can take a private car with driver.

If you are coming from Meo Vac, it is just 25 km on the QL4C over the infamous Ma Pi Leng Pass.

Tip: Visit Dong Van during this stunning Ha Giang loop tour (options for both on the back of a motorbike as private car with driver). Besides Dong Van you will visit most of the highlights in Ha Giang, such as the Ma Pi Leng Pass, local villages of minorities, Du Gia, Lung Cu flag tower, the Karst Plateau Geopark, Hmong King Palace and many more places!

There are plenty of hotels and homestays in and around the city. When you choose to stay inside the city you are close the the Old Quarter and have more options to eat. Though, it is worth considering to stay out of town. There are enough homestays in small villages where you can learn a lot more about the minority culture then staying inside the town and in addition it is a very great experience. For a the most local experience, try finding homestays around Lung Cu.

Some accommodations we recommend:

As this area is not the place to visit for rice fields, the area around Dong Van is equally beautiful all year round. Having that said, during the summer months June until September there is rainy seasons, with July and August being the peak of amount of rain fall. It does not have to be a reason not to go, as it normally does not rain all day, but there are more changes on land slides. In the winter months of December and January the temperatures can drop to 10 degrees, making it less pleasant to be on a motorbike. Especially at night it can get cold, so it might be wise to pick a hotel instead of staying in a not very isolated homestay.