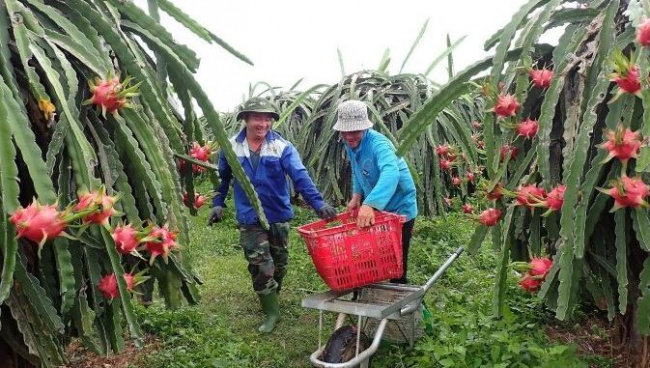 BINH THUAN – Due to the scarcity of goods, dragon fruit in the Tet crop has continuously increased in price in the past few days, currently at 18,000-20,000 VND per kilogram, with high profits for growers. ($1=24,000 VND)

On January 9, when the Tet dragon fruit came to its full ripeness, Mr. Tran Van Sang’s family in Ba Bau village (Ham Thanh commune, Ham Thuan Nam district) called someone to cut and sell to traders in the district. More than 700 poles for the off-season lamps three months ago, now bear ripe fruit, with an output of more than 10 tons.

After cutting, workers used tortoise carts to push them out and gather on the road. Traders weigh on the spot, load them on trucks and take them to the barn in Ham Thuan Nam. About 10 tons of goods Mr. Sang sold 180 million VND. Excluding the cost of electricity for the lights, fertilizer and care (about 40 million), the family earned a profit of 140 million dongs.

“My family is very happy because the harvest is right at the time when the price is high, this year the family has a better Tet than last year,” said Mr. Sang excitedly.

Mr. Sang said that this Tet dragon fruit crop is not as lucky as his family. Because around that most of the lantern gardens were “broken” due to erratic weather, not bearing as much fruit as his garden.

In addition, many gardeners in the region have given up growing dragon fruits because of many years of losses and prolonged precarious prices, causing this generation to lack supplies for the market. “I think this time the source of goods is small, so the new barns buy such high prices,” Mr. Sang said.

Nearly 20 km away, the garden of Mr. Nguyen Van Ut’s family in Ham Thuan Bac district has just harvested more than 5 tons of ripe fruit from 500 out-of-season lamp posts. The fruit is beautiful, the roads are convenient, so Mr. Ut’s dragon fruit is bought by traders for 20,000 VND per kg.

Mr. Ut said that the garden has 1,000 pillars, but this Tet crop is only half to reduce the risk. Many investment rounds in 2021 and 2022 consecutive losses due to low prices, causing his family to “hit” the market.

Seeing people cut down dragon fruit or not do it anymore, Mr. Ut also wondered, but the “risk” of investment and joy came to his family. “Thanks to the high price, this generation minus expenses, the family earns more than 75 million dong,” said Mr. Ut. 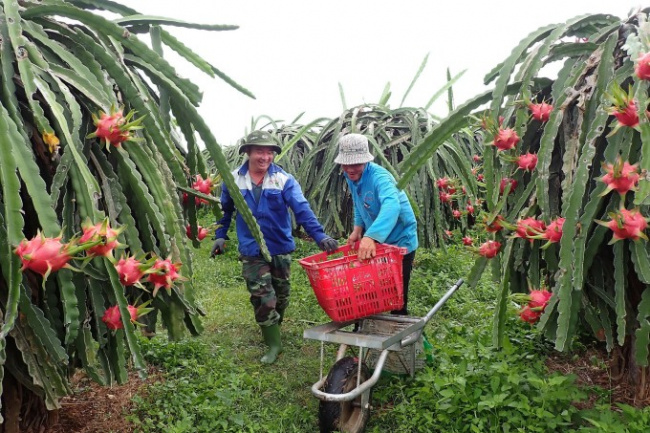 Mr. Le Quang, a trader in Ham Thuan Nam, said that the price is high, but in recent days due to the increased demand for Tet goods, but now the gardens have very few ripe dragon fruits. Due to insufficient supply, dragon fruit prices may stay high in the near future.

Ms. Sau, the owner of a large-scale dragon fruit barn on National Highway 1A, Ham Thuan Nam district, also said that this year’s Tet, the source of locally harvested goods is not much. The goods are broken, these days, she can only buy 30-35 tons a day, equal to 1/10 of the number of goods bought during Tet in previous years.

“Usually, the owner of the barn sits in one place to buy from traders, but the last few days the supply of goods is too small, I have to personally go down to the gardens to buy enough for export orders,” said Mrs. Sau.

The Department of Agriculture and Rural Development of Binh Thuan province said that dragon fruit is a tree of hunger eradication and poverty alleviation, so in previous years farmers continuously expanded the area. Statistics in 2021, the province has more than 33,700 hectares of dragon fruit. However, the market fluctuates, by the end of 2022, the area of ​​dragon fruit has decreased, currently only 27,800 hectares, a decrease of nearly 6,000 hectares.

Từ khoá: Dragon fruit farmers are happy because of the high price of the Tet crop