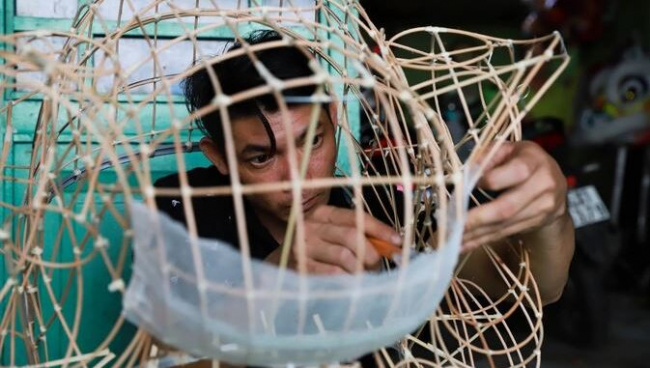 At more than 2pm, 10 young people at Thuan Anh Firm’s unicorn factory (Binh Tan district, Ho Chi Minh City) closed their eyes and tried to focus on completing the final stages in the production of unicorn heads and dragons, serving the occasion of the Lunar New Year . 2023. 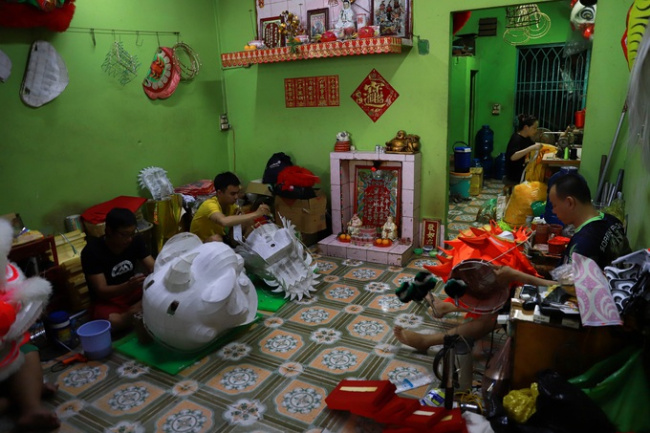 Workers at the factory are busy preparing goods for the Lunar New Year 2023 (Photo: Nguyen Vy).

Sometimes, some people take a nap for 5-10 minutes to regain their sanity, some people rush to eat rice to get strength to continue working. Last night, most of the workers at the factory stayed up until morning because of too many orders.

According to Mr. Banh Chi Hung (39 years old, factory owner), orders were placed right after the 2022 Lunar New Year . Although the factory has been gradually preparing since the beginning of last year, it still has to hustle because there are many more individual orders. late booking. The peak is the time after the Mid-Autumn Festival, which falls around September. At that time, the whole factory stayed up all night because of the rush of domestic and foreign orders.

The 2022 Lunar New Year, because the Covid-19 epidemic is still complicated, most unicorn teams only reuse the old unicorn heads, do not order new ones, so the factory has no orders. But then, in just a few days in the first few days of 2023, orders for unicorns and dragons increased a lot compared to the same period last year, due to the demand for shopping after the epidemic of lions, monks and dragons.

According to Mr. Hung, this year the price of raw materials increased by about 10%, but the factory decided not to increase the selling price to retain customers. Materials are prioritized by Mr. Hung to use Vietnamese goods, provided by acquaintances for decades. Particularly, the grade 1 fleece must be ordered abroad, with the price of more than 1.2 million VND/head.

On average, each product is sold for from 5 million to more than 7 million VND/head, depending on the size and type (Foshan, Phat Hac and Hac Son). Anh Hung said that by January 2023, the factory had sold nearly 140 products for the 2023 Lunar New Year, which is expected to increase until the 29th day of the lunar calendar. The orders mainly come from domestic provinces and cities and countries such as the US, Singapore, Hong Kong, Taiwan, Cambodia,…

Before opening the workshop, Mr. Hung studied and worked in this job for more than 20 years. The factory currently has 20 employees, taking turns dividing work shifts, some people even bring the unicorn home to complete on schedule. 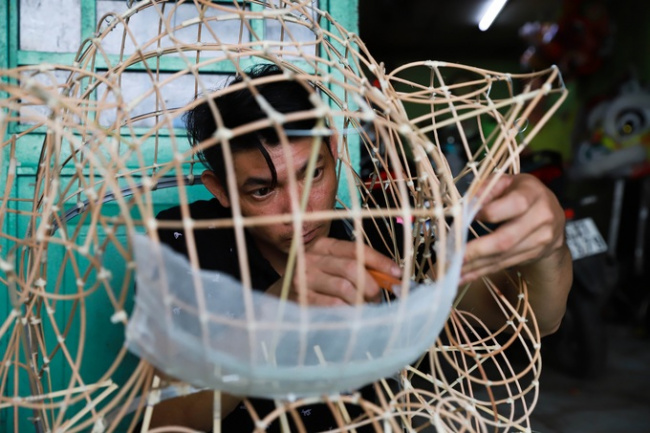 Each stage is meticulously performed by the craftsman (Photo: Nguyen Vy).

It is known that the unicorn frame is made from rattan and bamboo imported from Dong Nai. To create a complete unicorn frame takes 1-3 days depending on the complexity. The most difficult part of this stage is bending to create curves so as not to break, creating the highest certainty and accuracy. After completing the frame, the craftsman glued each piece of curtain fabric and paper to the pre-shaped unicorn head with glue and glue. The unicorn head will be checked, repainted the sticker paper and then dried in the sun for about 1 day. 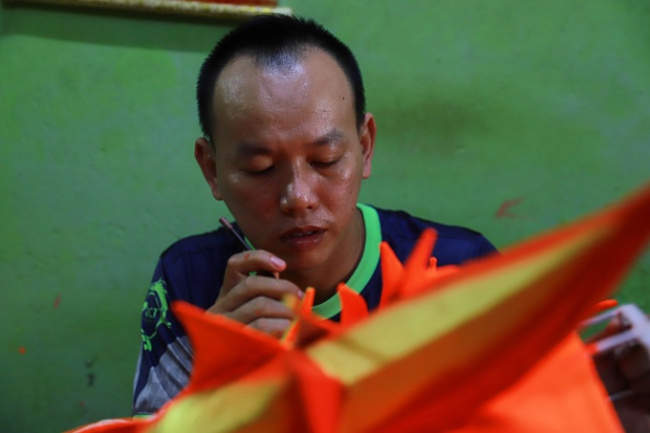 Hung is the main worker in charge of drawing the lion’s head, because this stage is the most important (Photo: Nguyen Vy).

The drawings are usually made by skilled artisans for many years, usually drawings of fire, patterns… On each unicorn, there are usually 4-7 colors such as orange, blue, yellow, red.. .

After the unicorn’s head was basically completed, another worker was in charge of the refurbishment, fur stickers, and unicorn eyes. The painter then transfers the unicorn head to the hairdresser, makes the beard with the fleece and aligns the eyes to perfection.

Inside the house, Ms. Ly Ngoc Oanh (36 years old, Mr. Hung’s wife) in charge of sewing unicorn tails, clothes, flags, parasols… for the dragon lion troupes. According to Ms. Oanh, the most sophisticated is sewing unicorn tails, usually with sequins cloth and then attaching feathers, glittering … to decorate.

Ms. Oanh shared that many nights she forgot to eat and sleep to work, she couldn’t avoid some times of frustration and discomfort.

“Except for the year of the epidemic, Tet is the same every year. When Tet comes, orders come massively, we work without rest. Although sometimes we lack sleep, a bit grumpy, but we are happy because we can still do business. “, Thao smiled and said. 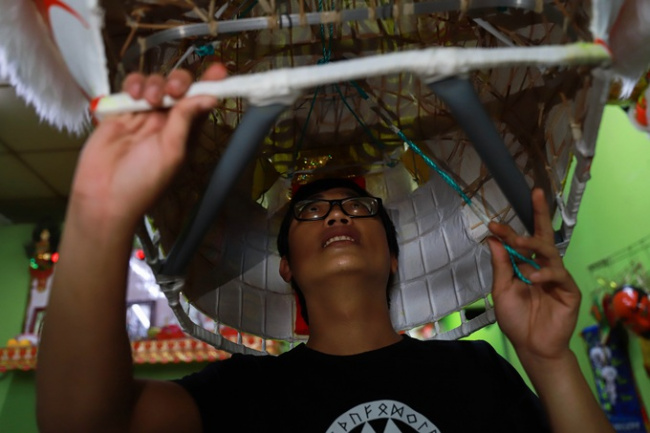 Mr. Duong Chi Dung (32 years old) is checking the internal parts of the unicorn’s head, to make sure the movements of the ears, eyes and mouth are smooth (Photo: Nguyen Vy).

Unlike every year, due to the New Year of the Rabbit 2023 with too many orders, the workers at the factory instead of one person holding a stage, now any worker must understand all the stages. When a worker stops to rest, another worker can replace the work in progress so as not to interrupt the production process.

Mr. Tran Thanh Phong (33 years old) is one of the longest working people in the workshop. At the age of 6, Mr. Phong was exposed to the art of lion dance through friends near his home. Later on, he became more and more passionate about this art, so he asked to follow many dance troupes in Ho Chi Minh City to learn. 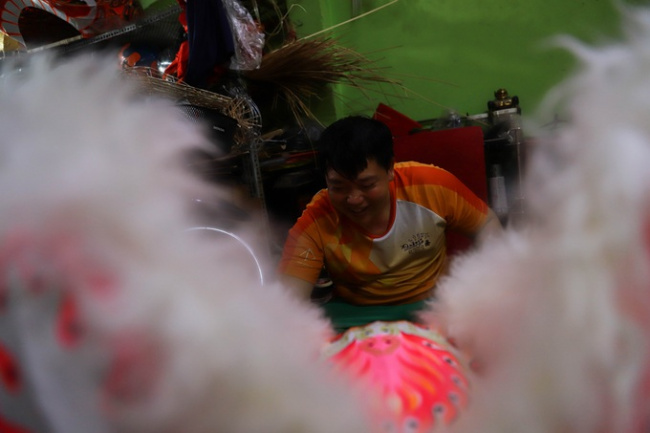 The job creates a stable and high income source for workers. But they have to trade time with their family because they have to go to the lion performance until the end of the full moon of January to return home (Photo: Nguyen Vy).

“Over the years, I have become a professional without knowing it. At first, my family objected because they wanted me to have a more stable job. But after seeing that this profession generates income, they kept the traditions of the people. Therefore, the whole family gradually supported,” Phong said.

Not only generating income from being a lion head, Phong also earns money from performances and competitions. Most recently, he and his teammates won medals at the 9th National Sports University – 2022, held in Quang Ninh.

Từ khoá: Earn hundreds of millions of dong on New Year’s Eve by being a lucky and prosperous mascot