With dense jungle and protected national parks, the question is, do wild elephants also live in Vietnam? The answer is yes, there are elephants in Vietnam, but unfortunately the numbers are so small that it is virtually impossible to encounter them.

Are there elephants in Vietnam?

Yes, Vietnam has wild elephants, but unfortunately the numbers are so small these days that the chance of seeing them in the wild is almost 0%. In the past, many elephants lived in Vietnam, especially in the central highlands of Vietnam and along the borders with Cambodia and Laos. In 1990 Vietnam had between 1500 and 2000 elephants but nowadays there are only between 100 and 150.

The main problem is habitat loss, which has shrunk by more than 358,000 hectares in just a few years. Other problems are illegal logging and hunting. This has not only led to the decline of elephants in Vietnam, but also many other wild animals in Vietnam.

The type of elephant that lives in Vietnam is the Asian elephant, which is also the largest mammal on the Asian continent. Besides Vietnam, they can also be found in India, Indonesia, Thailand, Cambodia, Laos, Myanmar, Nepal and Sri Lanka. They are smaller than the African elephants and grow to about 2 to 3.5 meters in size and weigh between 3000 and 5000 kg.

In the past, elephants were mainly found in the central highlands of Vietnam. Here they not only lived in the wild, hundreds of elephants were domesticated. Most of these elephants were mainly used in the timber industry, where they could carry heavy tree trunks in the forests. The MNong ethnic minority living in this area where famous for hunting and taming elephants in the Central Highlands. These animals where also used as carriers to carry supplies during the Vietnam War.

When the economy in Vietnam rapidly improved and the use of trucks and machines in the wood industry increased, the elephants were less needed. Some of these elephants in Vietnam were now used in tourism, for tourist elephant rides in Dak Lak in particular.

Elephant riding in Lak Lake (Dak Lak) in the central highlands of Vietnam.

The MNong ethnic minority still lives in this area and a visit to their village gives you a unique insight into their traditional life. That said, you should never ride an elephants. To tame an elephant the animals are tortured and despite the size of the animals, elephant rides are very bad for their back. Read more about why you should avoid elephant riding here.

Where are the elephants in Vietnam? 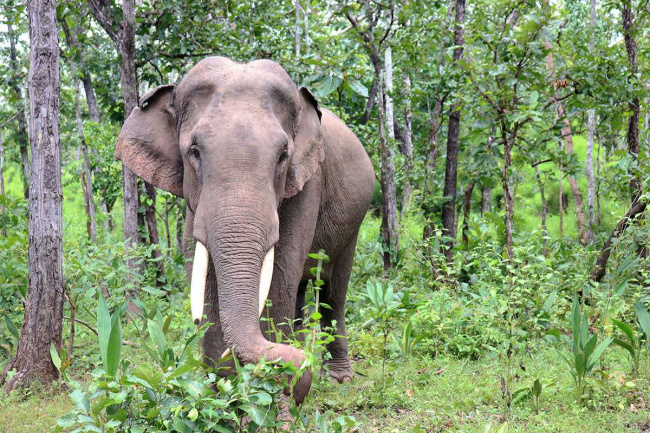 The best chance to encounter elephants is in Yok Don National Park. The central highlands and especially the Dak Lak province in which the national park is located, used to be the largest scene for elephants in Vietnam. Elephants were used first to work in industry and later for tourists. Some of these elephants have regained their freedom and are now walking through the national park with their personal mahout. This mahout keeps an eye on the elephant and makes sure he does not leave the park.

In 2018, Yok Don national park was able to start the first ethnic elephant tour in Vietnam in this way. You enter the jungle with a guide and park ranger in search of the location where the elephant and his mahout were last spotted. Along the way, the guide will tell you how they use tracks to find the elephant and tell you about the park’s biodiversity. It is a mighty sight when you first spot the elephant.

Another national park where elephants live is Pu Mat National Park, which borders Laos. The chance that you will spot a wild elephant here in Vietnam is unfortunately extremely small. Despite that, the park is definitely worth a visit, because you can take beautiful walks, watch birds and take a wonderful boat trip on the river.

Everyone knows the city of Hoi An, the most beautiful city in Vietnam, but in the same province as this city, there are also elephants in the wild. Very deep in the woods there is a herd of elephants in Quan Nam. In Nong Son District in Quan Nan, Hoi An province, there is an elephant sanctuary covering nearly 19,000 hectares. It is not possible for tourists to enter this area.

Từ khoá: Elephants in Vietnam – 3 places where they live in the wild