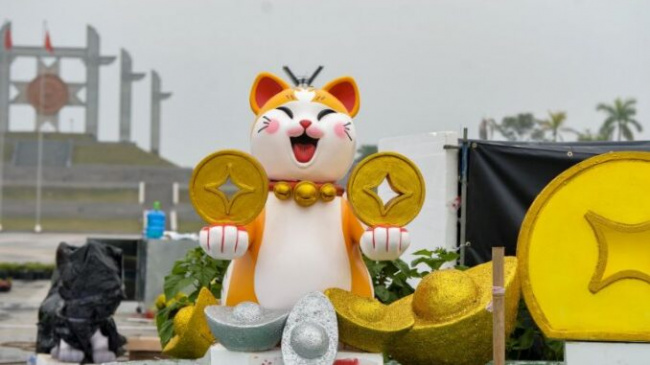 A group of workers from Binh Dinh countryside is actively installing a cluster of cat mascot symbols to greet the Spring of the Rabbit 2023 at Hoa Binh Square. 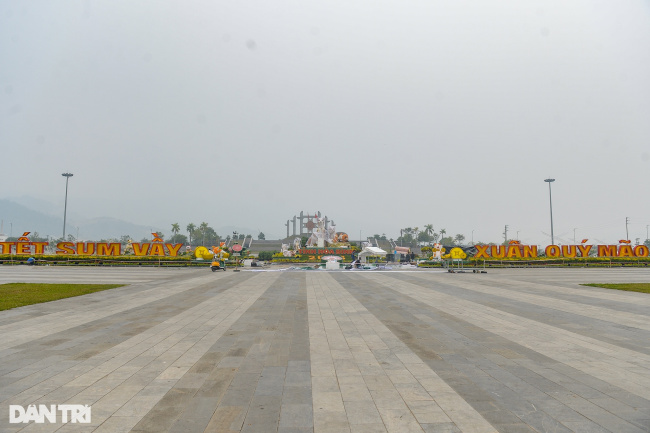 In the past few days, a group of nearly 10 workers from Binh Dinh has been actively completing the mascot symbol of the Lunar New Year 2023 installed at Hoa Binh Square (Hoa Binh city, Hoa Binh province). 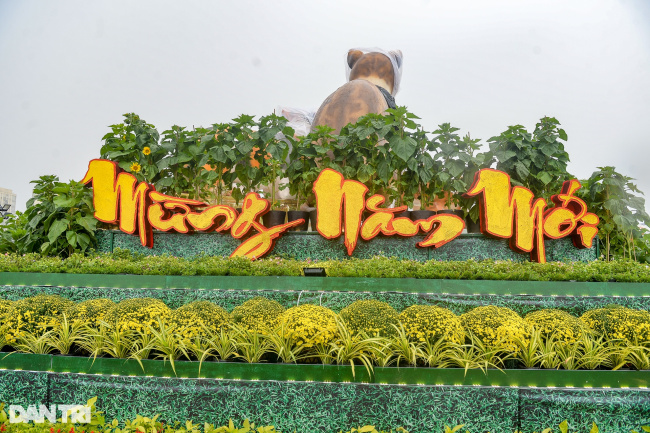 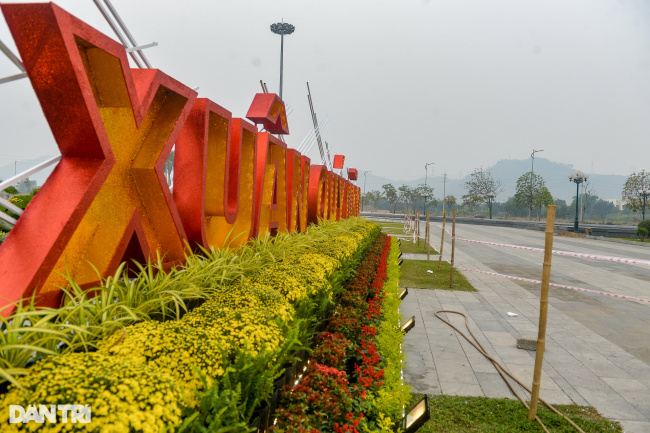 As noted, the front side of the mascot area is a “family” of cats, consisting of 9 cats (father cat, mother cat and 7 kittens), the back side is a set of words “Happy New Year”. The main part in front is the greeting gate, the spring flower clusters, the two wings are a stylized cat model cluster and 2 sets of shape letters “THE SUMMER – SPRING QUOTE”.

Mr. Bui Quang Diep, Chairman of Hoa Binh City People’s Committee, said that the money to build the mascot area comes from social sources, the ribbon-cutting ceremony is expected to be inaugurated on the afternoon of January 14 (ie. December 23, Year of the Tiger). 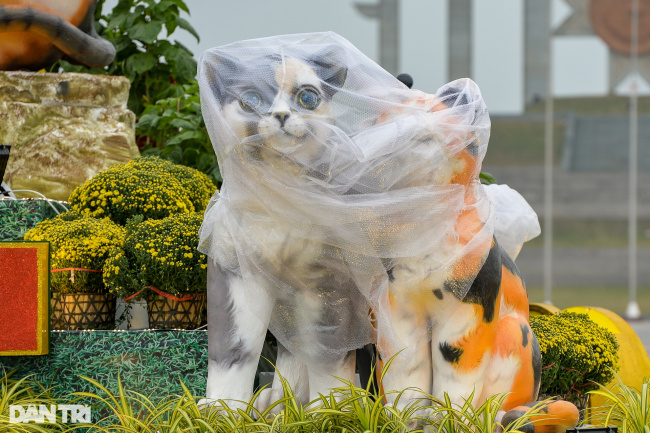 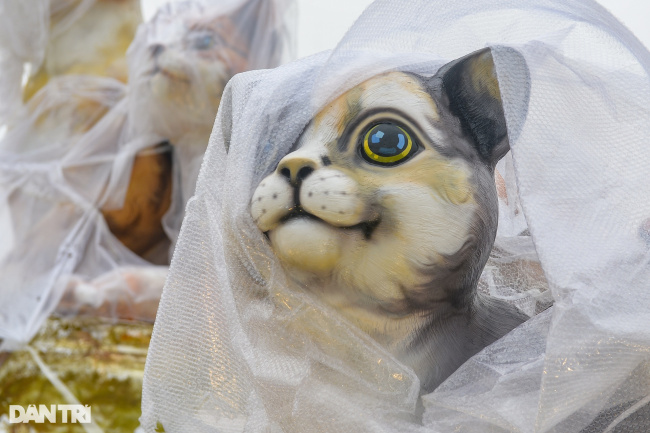 According to worker Nguyen Trong Nghia (23 residing in Binh Dinh), all cat mascots and auxiliary symbols were brought from Binh Dinh to Hoa Binh, decorative flowers imported from Da Lat. By the afternoon of January 10, Nghia and his colleagues had completed nearly 90% of the workload.

“As of this afternoon (January 10), we have installed about 5,000 LED bulbs to serve lighting and decoration, this number has not stopped here in the coming days,” Nghia said. 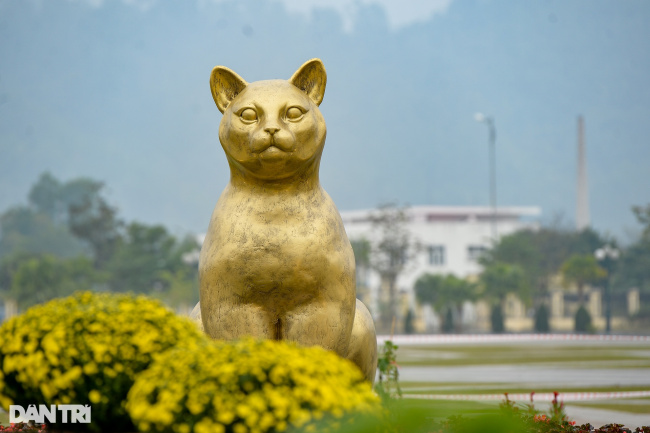 And worker Nguyen Van Duy (39 years old, residing in Binh Dinh) shared, the mascots are made from foam then covered with mesh, covered with glue, plaster… 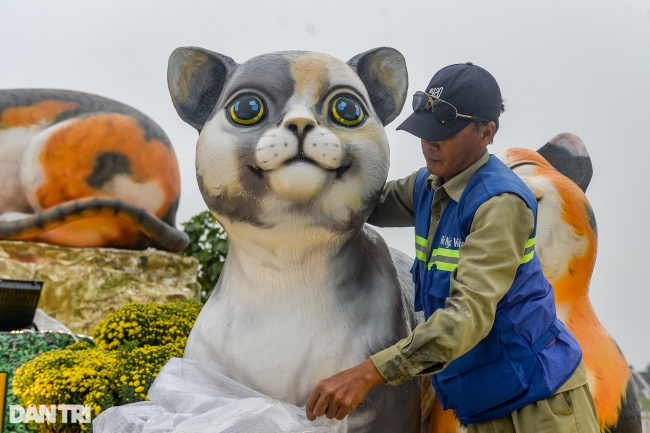 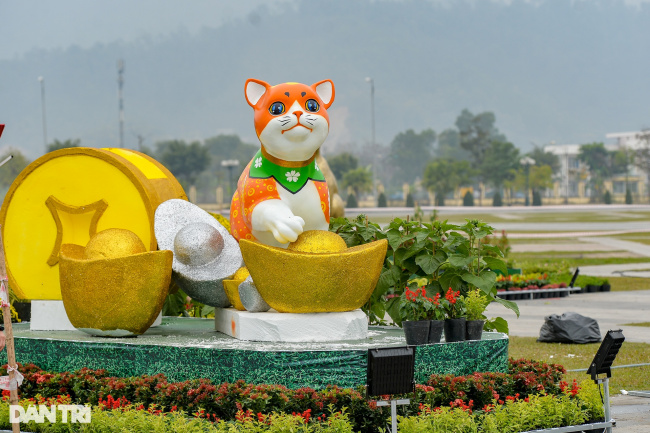 Mr. Ho Ngoc Vien (44 years old, residing in Binh Dinh) shields the cat mascots before the handover date. Mr. Vien said that over the past 10 days, his team of 8 construction workers worked hard day and night to keep up with the handover schedule.

According to Mr. Vien, the group of cat mascots has so far installed 13, the highest is more than 3 meters and the low is 1 meter.

“In order to hand over on time, we have to work from early morning until 21-22 pm to have a break,” said Mr. Vien.

On the afternoon of January 10, despite a little rain, the cat mascot area always attracts the attention of many people to visit and take pictures. After observing for a while, Mr. Tran Van Thu and Ms. Xuan (residing in Dong Tien ward, Hoa Binh city) both praised the cat mascot cluster as very beautiful, with many highlights, and well decorated. 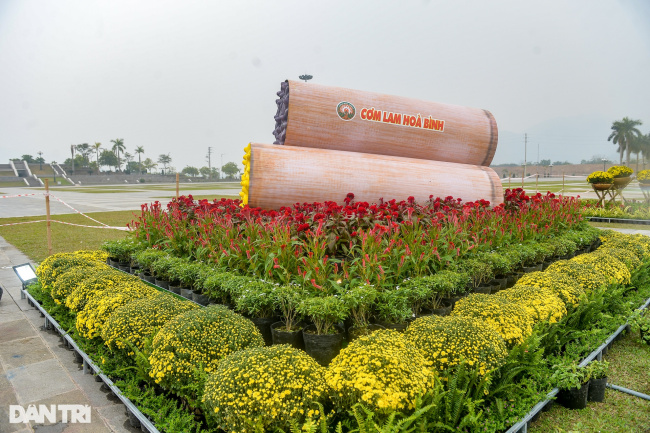 In addition to the cat mascot, there are additional symbols representing the culture of Hoa Binh such as wine can, rice lam. 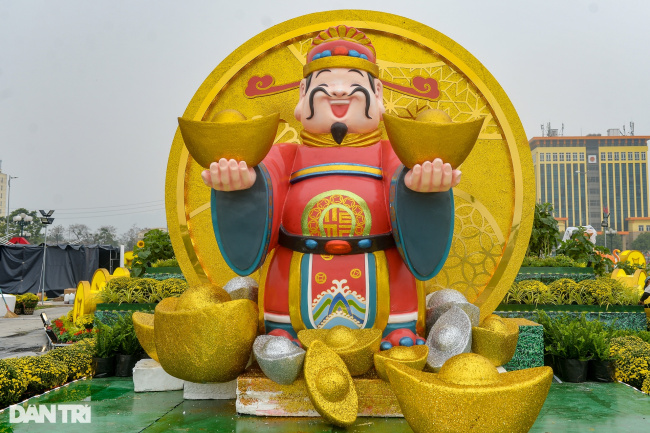