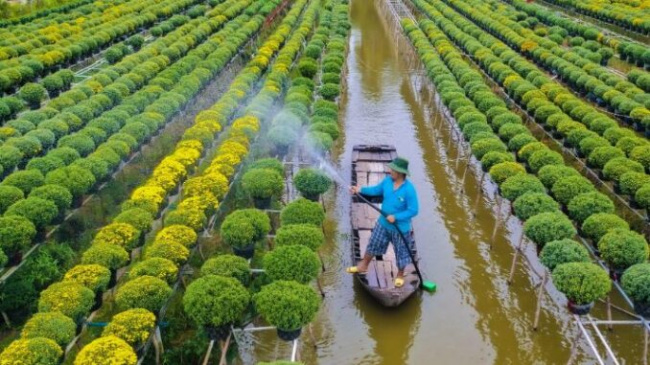 Half a month before the 2023 Lunar New Year, walking along the bypass route in the inner city of Sa Dec (provincial road DT848, Dong Thap province), passers-by will catch sight of outstanding golden patches from the fields. raspberry chrysanthemum. 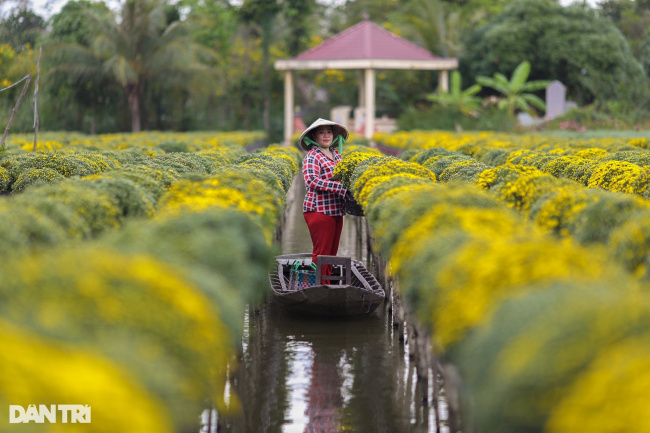 These days, Ms. Cao Oanh (living in Tan Khanh Dong commune, Sa Dec city) has put aside most of her work at the market to go home to help her husband take care of her raspberry chrysanthemum field which is in season. 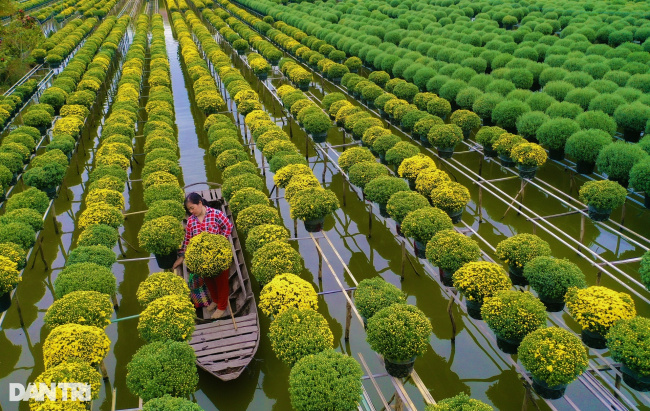 As noted by Dan Tri , while the raspberry chrysanthemum gardeners in the area of ​​Tan Khanh Dong commune are still green or have little blooms, the flower fields of Ms. Oanh and her husband’s house are already golden.

“This year, my field of raspberry chrysanthemums has a good harvest. This type of chrysanthemum is long-lasting, can be displayed from now until the New Year. Therefore, the flowers that start to bloom early will attract traders to choose to buy early, they will see blooms. beautiful will buy a lot”, Mr. Huynh Van Hoang (husband of Oanh) happily. 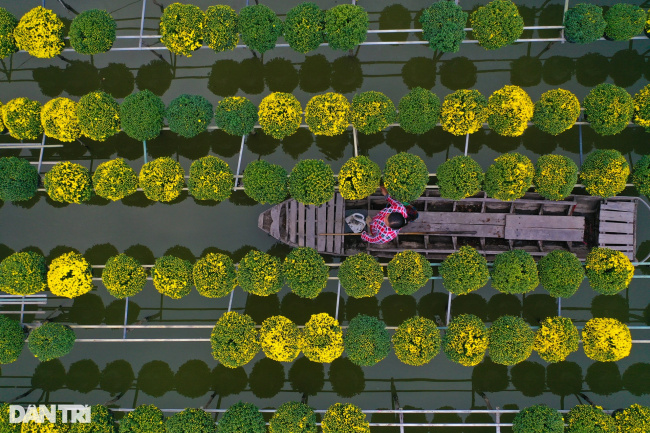 Mr. Hoang said that each year his family earns about 200-250 million dong from a flower field of 4,000m2 with about 4,000 pots of raspberry chrysanthemum, a profit of more than 100 million dongs.

“Growing raspberry chrysanthemums is more economical than other chrysanthemums or flowers because they are strong, less prone to breakage, so easy to transport to distant provinces, so the purchasing power is greater. However, the care process is somewhat more extreme.” said the farmer. 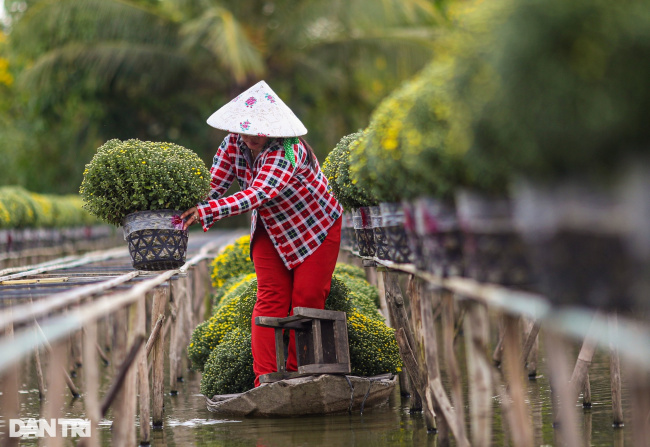 The time to take care of a raspberry crop is about 7 months (from the full moon of May to December 19-20). On the days before the Lunar New Year, the field owners sometimes stay next to the flowers from morning to night. “Leased land for a year, but only used it for more than half a year to plant, family income is expected in the season of chrysanthemums and Tet holiday,” Oanh and her husband shared. 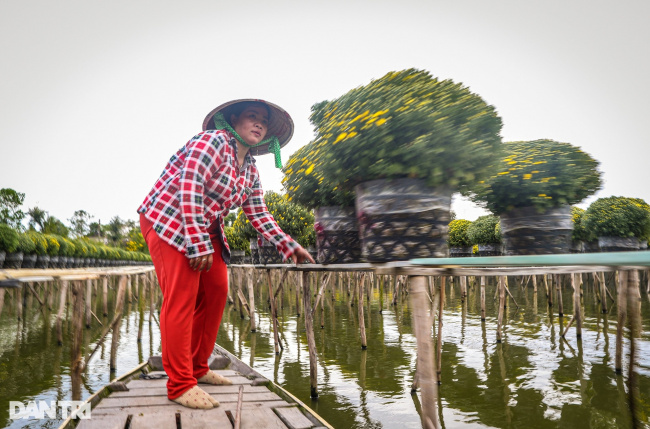 An interesting point in the fields of raspberry chrysanthemums in Tan Khanh Dong area are the stakes on the water surface instead of the ground. Farmers tend, harvest and transport flowers by boat.

According to Mr. Hoang, planting raspberry chrysanthemums on the water to easily absorb water on the spot, instead of having to drag the hose around the garden. This land was originally a crop field, and Hoang and his wife rented it and pumped water from the river branch into the field. 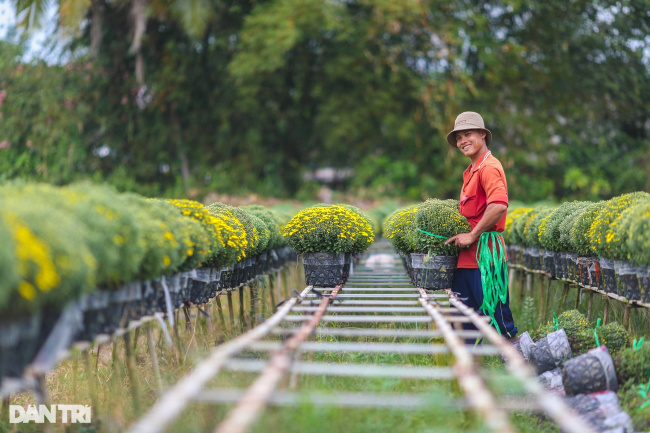 Not far from the field of Mrs. Oanh and her husband is the house of Mr. Cong Duc’s raspberry chrysanthemum garden (from Tan Khanh Dong commune). In the early days of January, the whole garden had 6-7 workers present to take care of and harvest flowers. 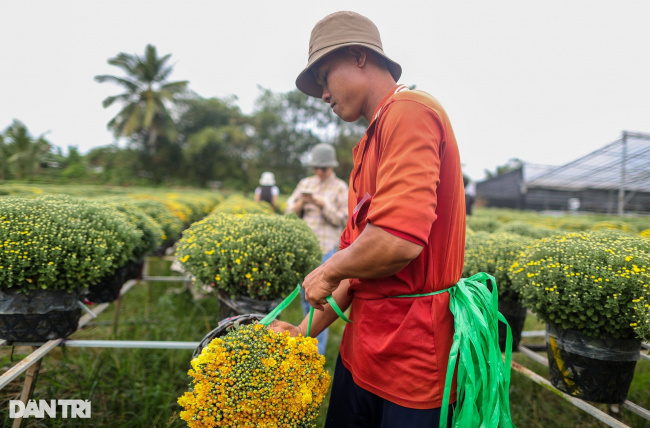 “Up to the time of Tet this year, cotton is not as blooming as in previous years. I just hope the whole garden can bloom in time to sell at a good price”, said the owner of Duc garden. Every year, by about December 25, Mr. Duc has sold out of flowers. 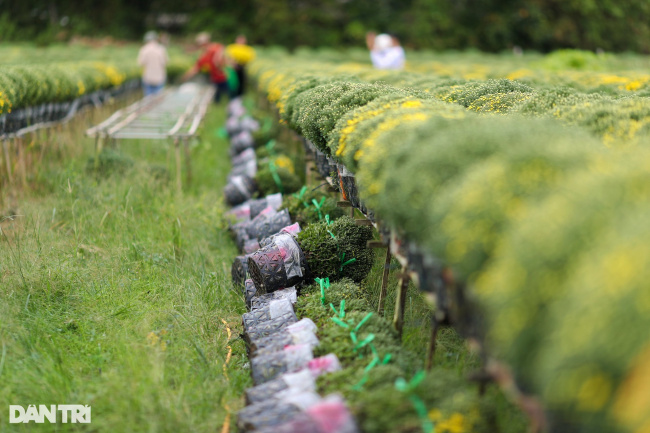 Mr. Duc’s garden of raspberry chrysanthemums does not lead water into the field wall, partly convenient for the care and harvesting process. With the advantage of many workers, people go to tie flowers to put them on the ground, then someone comes to transport them to traders, instead of having to row around. 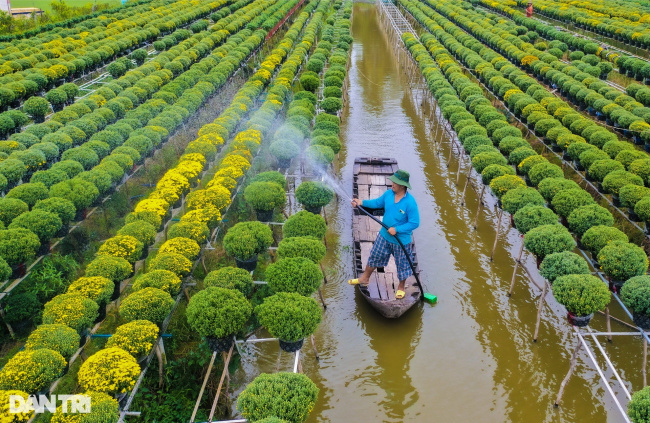 The whole garden has only one creek in the middle, farmers will use the sprinkler up high to irrigate. Cong Duc’s entire garden is 5,000m2 wide, planted with about 6,000 pots of chrysanthemums of all kinds, most of which are raspberry chrysanthemums. This is the largest raspberry garden in the Tan Khanh Dong flower growing region.

According to the garden owner, with the large scale of flower growing by local households, it is possible that in the near future this place will be planned as a tourist flower village along with the current Tan Quy Dong flower village. During the harvest time of raspberry chrysanthemums in Sa Dec, many tourists also come here to visit and take pictures. A group of students from Can Tho said that a few years ago, they often invited each other to the flower gardens in Sa Dec to play. “We like to go to the gardens in Tan Khanh Dong, all are raspberry chrysanthemums, not diverse and colorful, but not as crowded as in the tourist flower village of Tan Quy Dong,” said the group of friends. The owner of Cong Duc garden said that he did not open a service to welcome visitors like in Tan Quy Dong flower village because he was afraid that crowded guests would damage the flowers. If guests came to ask to take pictures, he invited them in and told them to be careful. The Sa Dec flower growing area is formed next to the branches of the Mekong River, one side is the Tien River, the other is the Sa Dec River. Two flows of alluvium deposit, creating suitable moisture for many types of flowers in this land. Intensive farming on the mound, on the rig, whenever the flood comes or the tide rises, people don’t worry about the flowers being flooded. Cultivation of ornamental flowers (ornamental flowers) in Sa Dec city is one of the five agricultural restructuring industries of Dong Thap province. The area of ​​flower growing in this locality is more than 600ha, most concentrated in Tan Quy Dong ward, Tan Khanh Dong commune, An Hoa ward and Tan Quy Tay commune, with more than 2,000 households producing ornamental flowers of all kinds.

Near Tet, the flower pots here will be bought by traders throughout the West, to Ho Chi Minh City, Da Lat and to the North.

Từ khoá: Farmers in Sa Dec flower village are busy in the field of raspberry chrysanthemums on the days leading up to Tet