After two years of absence due to Covid-19, foreign guests have returned to Vietnam to welcome the new year in many provinces and cities across the country.

From the afternoon of December 31, a large number of foreigners and Vietnamese young people gathered at Tay Ta Hien street (Hoan Kiem district, Hanoi). The neighborhoods are almost empty. Due to overcrowding, restaurant staff had to stand outside the road to limit the flow of pedestrians colliding with customers and dining tables.

People drink alcohol together, eat street food in the area “International intersection”. They counted down and shouted “Happy New Year” at the time of the new year and hugged and shared joy. 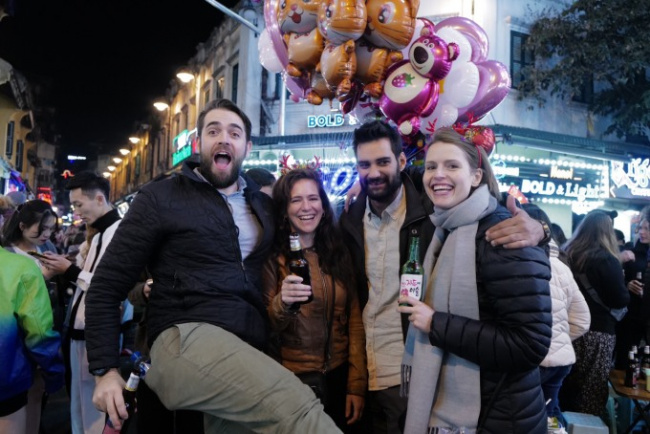 The joy of foreign guests on Ta Hien Street, Hanoi at the moment of New Year’s Eve. Photo: Ngoc Thanh

The family of Mr. Alwin Muschter and Mrs. Kristina Luebbe chose Vietnam as a destination for the New Year by chance when their Asia tour stopped in Hanoi on New Year’s Eve.

Ms. Kristina said Hanoi was a “beautiful and friendly” city, different from what she imagined a place where many wars had occurred. The year 2022 for her is a very difficult time when she has to treat so many Covid-19 patients, as a doctor. She and her husband hope 2023 will have more time to be together, enjoy time to rest, and travel.

Mr. Alwin loves history stories in Vietnam and looks forward to coming back to learn more about the places here and also the Lunar New Year.

Holding hands and walking at the intersection of Le Thai To – Luong Van Can, Hanoi, Mr and Mrs Satshya Tharien, 37, an Indian, shared that 2022 is a very special year when he gets married to his girlfriend after 3 years know each other. He and his wife decided to celebrate the new year in Hanoi because they had been here before, but this was the first time they went together.

“I like the people, the food and the atmosphere in this city,” said Akash Narang, Tharien’s wife. Your 2023 goal is to travel more around the world, exercise more regularly, and walk for at least 45 minutes a day.

At the end of the year, the weather in Thua Thien Hue is cold, many people flock to the 6 intersection on Hung Vuong Street to welcome the new year. The eateries and restaurants in the West Street area of ​​Vo Thi Sau and Chu Van An streets were full of people eating and drinking. Hello 2023, Hue City will hold a countdown right in this area.

Rory and Abrielle, 28 years old, British, said the couple came to Vietnam to travel 9 days ago, after visiting Cambodia. He finds the weather in Vietnam much warmer than in England, where it is snowing. He and his wife sat on Chu Van An pedestrian street to welcome the new year and hope for peace, harmony, and the disease to go away.

Ho Chi Minh City, the leading locality in terms of international arrivals in 2022, with nearly 3 million arrivals, also attracts many foreigners to stop at the New Year 2023. Police, militia and self-defense forces are still scattered. along the route to keep order on New Year’s Eve at Bui Vien and De Tham streets or Nguyen Hue pedestrian street and Thu Thiem tunnel, the fireworks site.

Many foreign guests sit on the sidewalk, sipping drinks waiting for the new year. Sitting with a group of Russian friends in Bui Vien area, 34-year-old Annavita said that this is the first time welcoming the new year in Vietnam. “The atmosphere here is wonderful. It’s not as cold as in my hometown, so it’s very comfortable,” said Annavita. She and her friends visited Ho Chi Minh City and then to the western provinces during the New Year holiday. 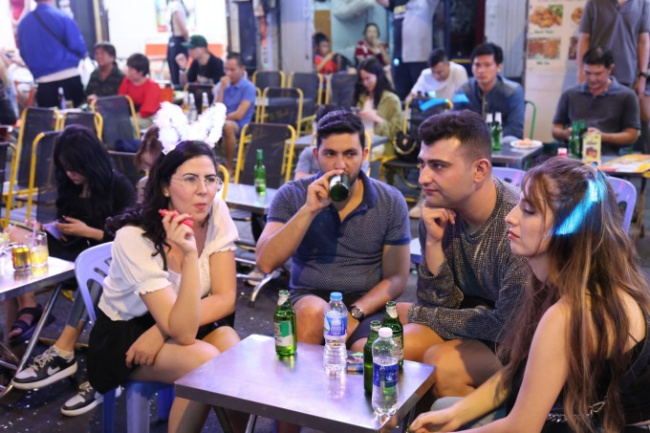 More than 707,000 foreign visitors came to Vietnam in December 2022, the highest since the beginning of the year, an increase of more than 15% compared to the previous month. Most tourists in Vietnam during the New Year look forward to a year without disease and a peaceful life.

In 2023, Vietnam’s tourism is expected to welcome 8 million international visitors.