The seaside town of Ha Tien on the Gulf of Thailand and the River Chau in the province of Kien Giang was until recently a sleepy town that did not receive many foreign visitors. There was a change in opening the border with Cambodia and the ferry connection with the island of Phu Quoc. It is the place where the Mekong Delta meets the ocean and a very relaxed town for travelers to stay for a day before continuing their trip. 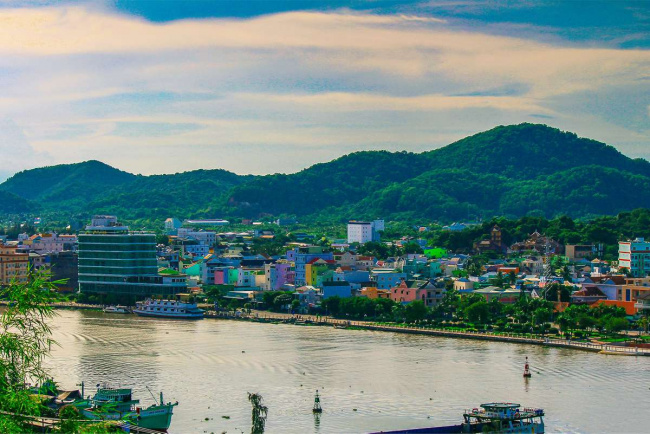 Until 1708, the area was a Cambodian province led by a governor, Chinese immigrant Mac Cuu. After repeated attacks by the Thai, the governor turned to protection for the Vietnamese and became a vazal of the princes of the Nguyen dynasty. By the end of the 18th century, the region came under direct governance of the Nguyen.

During the terror of the Red Khmer, Cambodian troops targeted a massacre in the province. Thousands were killed and the entire population of Ha Tien escaped the city. The attacks were one of the reasons for Vietnam to enter Cambodia in 1979 and to expel the Khmer regime.

Things to do in Ha Tien

For most travelers, Ha Tien is just a transit point on the way to Phu Quoc or the Mekong Delta. Those who stay for a little longer find a town with a nice river market and some famous temples. 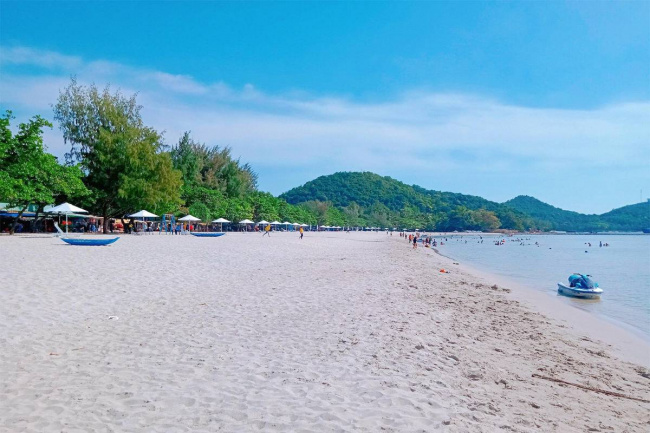 Due to its direct location on the Gulf of Thailand, Ha Tien has a long coastline with many beaches. One of the most untouched beaches is Bai No. Here you have coconut palms at your back and fishing boats float quietly in the water in front of you. 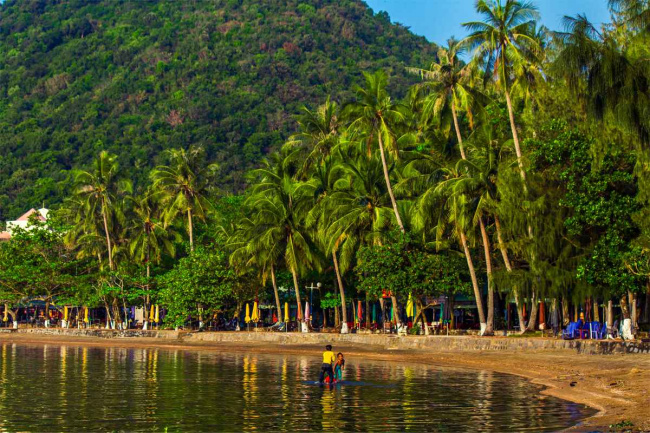 Mui Nai Beach is also popular, but for a completely different reason. The sand here is dark brown and the water is not perfectly turquoise either, but an afternoon sunbathing on Mui Nai is good for your skin. This is because mud is deposited here, so you immediately receive a free beauty treatment. Next to the beach you will find some places where fresh fish is prepared. Because the beaches are on the west coast, you can also enjoy breathtaking sunsets here. 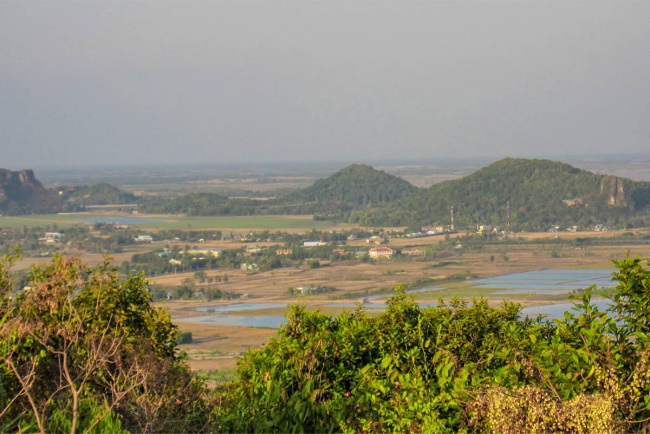 Thach Dong Temple is located 4 kilometer from the center of Ha Tien, on the way to Mui Nai Beach. This temple commemorates the horrific massacre in which 130 Vietnamese citizens were murdered by Pol Pot’s Khmer Rouge on March 14 in 1978. It was it was an act of desperation by the Khmer Rouge, as the Vietnamese forces were a lot stronger and drove the regime from power by invading Cambodia on January 7 in 1979. The temple is located in a cave excavated into the rock of limestone. The Thach Dong Temple stands in a sort of pavilion with a roof made out of tiles. Take a hike up to enjoy a good view of rice fields and hills. 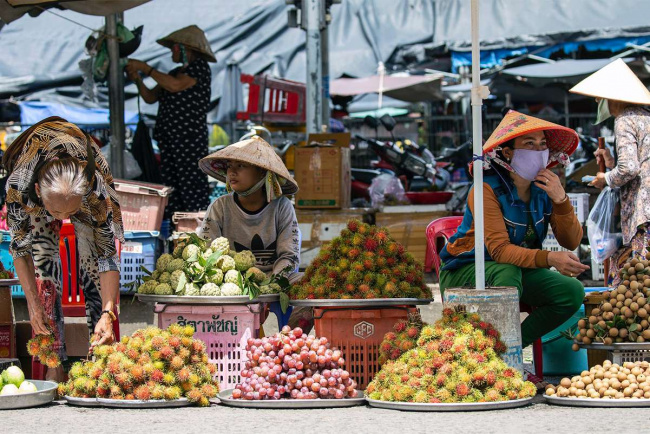 The night market with its food stalls and souvenirs is also worth a visit. The prices are aimed at tourists, but after a negotiation you can take something off the price.

Close to the center of Ha Tien is Da Dung, a large limestone mountain that is located directly on the sea and is about a hundred meters high. There are no fewer than fourteen caves in Da Dung, part of which is accessible to the public. Da Dung mountain used to be an important military base of the Vietnamese People’s Army during the Vietnam War because of the caving system.

The advantage is that you only pay the entrance fee once, after which you can easily ‘cave hopping’ via handy hiking trails. You can also explore beautiful caves in Thach Dong and the impressive Buddhist pagoda Tien Son is also located here. Through an opening in the cave, that sanctuary is naturally lit from above. From the top you have a stunning view of Ha Tien. Its mysterious atmosphere and beauty make it one of the most special places in Ha Tien and its surroundings. 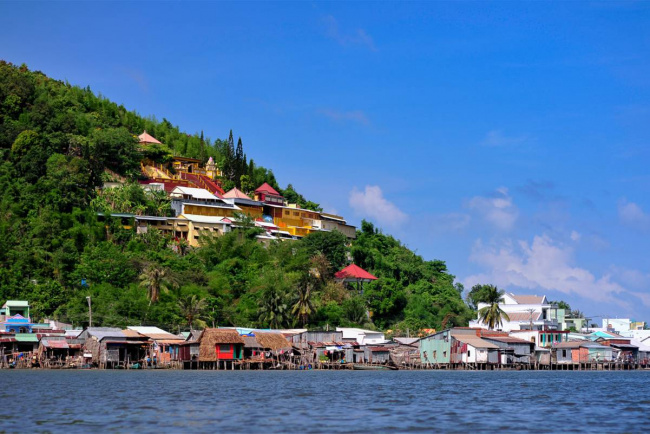 Before entering Ha Tien, you will see that the Giang Thanh River forms a lagoon, surrounded by a dense mangrove forest, before ending the river in the sea. Next to the lagoon is a Buddhist monastery. The buildings of the monastery are not very special, but the climb to the viewpoint from which you can see the city, the countryside and the lagoon is more than worth it. 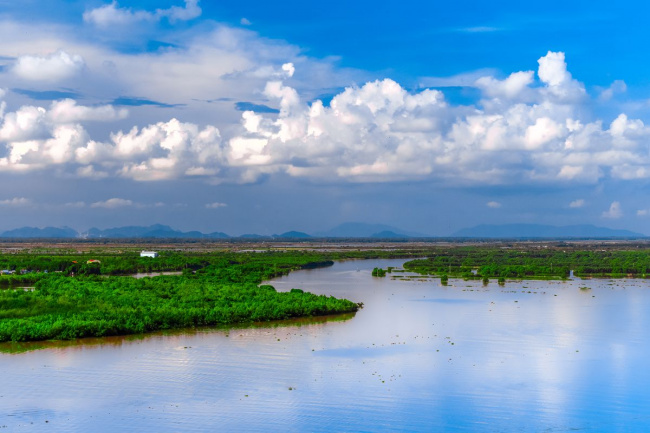 When you rent a bicycle or motorbike, you can easily reach the Xa Xia temple from the center. This is a sanctuary for the Khmer population, a minority in this Vietnamese area close to the border with Cambodia. Xa Xia is a beautifully designed temple complex, with numerous statues, colorful murals in the main temple and ornate decorations.

The range of hotels has grown rapidly in Ha Tien since the city has become a popular place to travel to Cambodia and Phu Quoc. Most accommodations are mainly budget to midrange hotels. Luxury accommodations are not yet available. Along the beach of Mui Nai is the most recommended place to look for an accommodation.

It should come as no surprise that Ha Tien has many seafood restaurants. The fresh fish is especially cheap at the local fish stalls along the river and the street stalls in town. Even if you don’t like fish, there is plenty to get in Ha Tien.

Many dishes have culinary influences from the Chinese and the Khmer, who both still make up a large part of the people living here. You will also find many food from the local region, such as vegetables, fish, rice and fruit from the Mekong Delta. For travelers who miss western food, head to Andy’s Oasis Bar.

If you don’t feel like looking for buses, taxis and transfers, you can also choose to travel by tour through the Mekong Delta to Phu Quoc or Cambodia. You can choose to start in Cambodia, Phu Quoc or Ho Chi Minh City (either way possible).

There is a bus every 1 or 2 hours between Ha Tien and Ho Chi Minh City. The most comfortable are the sleeping buses. The most reliable buses are the orange buses from Futa (Phuong Trang). A ticket costs around 7 EUR and the bus journey takes about 8 hours.

There are daily buses between Can Tho and Ha Tien. The journey takes about 4 hours. There are also transfer combinations that you can book that take you to the port or with a short transfer directly to Cambodia, so that you do not have to stay overnight in Ha Tien. Ask your accommodation in Can Tho for this.

From Chau Doc to Ha Tien is approximately 93 km. The cheapest option to travel between these cities is taking a bus, which costs just 4 USD and takes about 3 hours. There are direct buses from Chau Doc that leave every two hours daily.

You can go around by taxi in Ha Tien. Mai Linh Taxi is the most reliable taxi service here. It’s a great way to go to the beach or one of the caves or temples nearby

The Ha Tien border crossing with Cambodia is one of the most used land crossings between Vietnam and Cambodia. From Ha Tien you can go directly to the coastal cities of Cambodia such as Kep, Kampot and Sihanoukville.

Local Vietnam has a unique custom made tour that connects Ho Chi Minh City with the Cambodian towns of Kep, Kampot or Sihanoukville. On the way you will stop near Can Tho where you will visit the biggest floating market of the Mekong Delta, cycle through the countryside and make a boat ride. The tour ends at your hotel in Cambodia with a drop off. Check out our tour here: Saigon – Mekong Delta – Cambodia.

The boat from Ha Tien to Phu Quoc 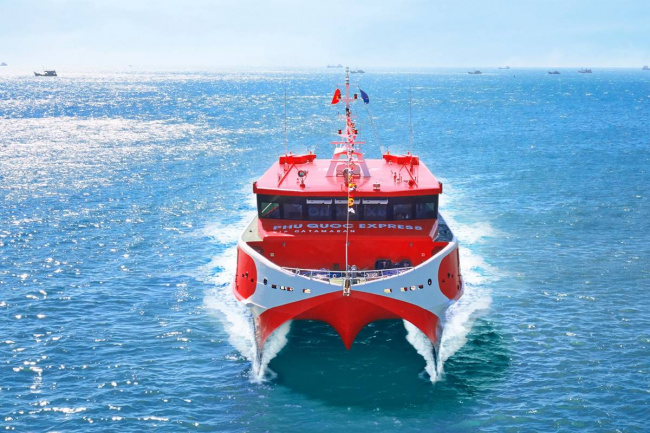 There are several boats per day between Ha Tien and Phu. The crossing takes 1 hour and 15 minutes and you can choose between the Superdong Speed Ferry and the Phu Quoc Express. The first boat leaves at 7:35 AM and the last boat at 1:45 PM.