Former President Ho Chi Minh, or affectionately known as Uncle Ho by the Vietnamese people, was born in 1890 in the village of Hoang Tru. He moved to England and France where he embranced communism. During his time here he tried to induce the French government to gain independence from the Union of Indochina. After wandering through many countries, Hồ returned to Vietnam in 1941 via Pac Bo in Cao Bang and there took the name Ho Chi Minh (he who enlightened).

He fought with the Viet Minh against the Japanese occupiers during World War II. On September 2, 1945, he declared the independence of the Democratic Republic in Hanoi.

On March 2, 1946, he declared himself president of Vietnam. On March 6, 1946, he reached an agreement with the French government on the independence of Vietnam within the Union of Indochina and the French Union, but not yet full independence. For that reason they kept fighting. In 1954, the Vietminh led by General Võ Nguyên Giáp dealt a heavy blow to the French army in the battle of Dien Bien Phu. After this, an armistice was concluded in the Geneva Accords on July 21, 1954 and the warring parties had to withdraw temporarily

The intention was to hold elections in two years and to reunite the country. However, this never happened for opportunistic reasons: in the North the regime was too doctrinal and in the South the Americans in particular feared communist expansion. With that, the division of the country became a fact and a North Vietnam and a South Vietnam were born.

After independence, the fighting in the South was unofficially continued by old members of the Viet Minh who now fought as the Vietcong against the South Vietnamese government. Hồ’s life was therefore largely characterized by war. First against France and later against South Vietnam and its allies, including the United States and Australia.

Ho died on September 2, 1969 at the age of 79. His body was embalmed and placed in the mausoleum. 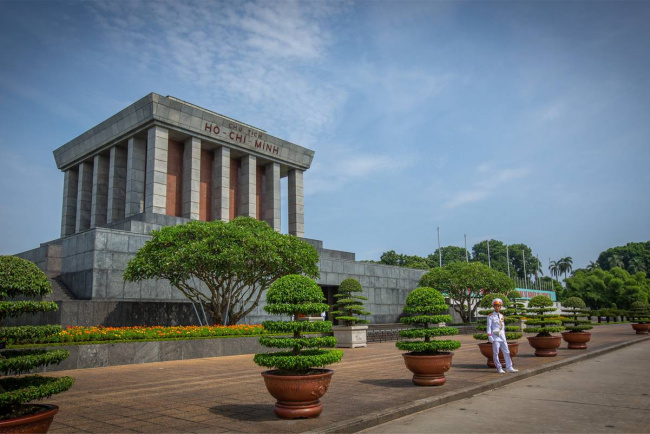 The late president’s grave is located in mausoleum of Ho Chi Minh in Ba-Dinh Square and Hung Vuong Street, in western Hanoi. It was built with Russian help between 1973 and 1975, on the site where Ho Chi Minh presented the Declaration of Independence on September 2, 1945. The 21-meter-high mausoleum is a dark gray building in the shape of a colossal cube. Marble from the Marble Mountains near Da Nang was used as a building material.

If you want to visit the Ho Chi Minh Mausoleum you have to put your bag and camera in the lobby. Taking photographs in the building is strictly prohibited. Visitors must be smartly dressed (no flip flops, shorts and tank tops) and behave properly (no loud talking and laughing).

The tomb is a kind of pilgrimage, which daily attracts visitors from all parts of the country. It is a tourist attraction and one of the most popular school trip destinations. Ho Chi Minh never wanted this because he wanted to be cremated. Often thousands of people line up to get a glimpse of the leader who died in 1969. The gigantic Ba-Dinh Square is intended for official parades and can accommodate a quarter of a million people.

On an elevation in the heart of the cube is the glass box with the simply dressed, embalmed body of Ho Chi Minh (Uncle Ho). Soldiers stand on the four corners. The room is quiet, despite the icy temperature that prevails. You exit the mausoleum at the back.

Entrance fee: Admission to the Mausoleum is free.

The Mausoleum is closed on Fridays and for a period of two months in the fall (October and November) as the embalmed body is being sent to Russia for preventive maintenance and restoration.

The Ho Chi Minh Mausoleum is located in Ba Dinh Square and is easily (and best) accessible by taxi. You can also walk from the Old Quarter which is about 2,5 kilometer or a 30 minute walk. As an alternative to walking and the taxi, there is the traditional cyclo, with which you sit in front of a bike and let yourself cycle through the city .

Other things to do around the mausoleum

The Ho Chi Minh Mausoleum in located on Ba Dinh Square. There are a lot more sights around the square to visit, mostly dedicated to Ho Chi Minh. To start with Ho Chi Minh museum, right next to the Mausoleum. The museum is has a few level and each level is dedicated to a part of Ho Chi Minh’s life. Behind the Mausoleum you will find the presidential palace, where he never lived himself, because he preferred to live in a simple house like the rest of the Vietnamese and because the palace is a reminder of the French colonial era. Instead, he lived next to the palace, in a simple stilt house, which you can now visit.

Between the Mausoleum and the museum you will find one of the most sacred temples in Hanoi, the One Pillar Pagoda.

In a radius of 1 km walking there are more sights you can visit. North of the square you will find the largest lake in Hanoi, West Lake with Tran Quoc Pagoda. In the east there is Imperial Citadel of Thang Long and south you will find the Temple Of Literature.

You can easily spend here half a day or longer to visit all the sights mentioned above. When going back to the Old Quarter from here you can stop on the way at Hanoi train street.