Hoan Kiem Lake in Hanoi attracts tourists and locals looking to get away from the noise and hectic city. The lake is peaceful and quiet with a small island in the middle of the lake. You cannot fully visit Hanoi without a walk around Hoan Kiem Lake, the center of the city.

The story of Hoan Kiem Lake

Lying in the center of Hanoi Old Quarter, Hoan Kiem Lake is a beautiful, peaceful place with a fascinating history. Legend has it that in 1428, Emperor Le Loi was given a magic sword from the dragon to fight against Chinese oppressors. This sword came from the Hoan Kiem lake.

After a successful battle against the Chinese invaders, Emperor Le Loi visited the beautiful lake. He was on a boat on the lake when a huge golden turtle showed up. The tortoise explained that he had been sent by his master, the dragon, to retrieve the sword from Le Loi. Loi returned the sword to the turtle, who disappeared into the depths with it. Loi then named the area Hoan Kiem Lake, meaning “Lake of the Returned Sword” in memory of this spectacular event.

1. Walk around the lake

The best way to see the lake is to walk around it. There is a different atmosphere at every time of the day. In the very early morning you will see people exercising. Some run around the lake, others use the outside exercise machines and you will see a lot of people doing tai chi. 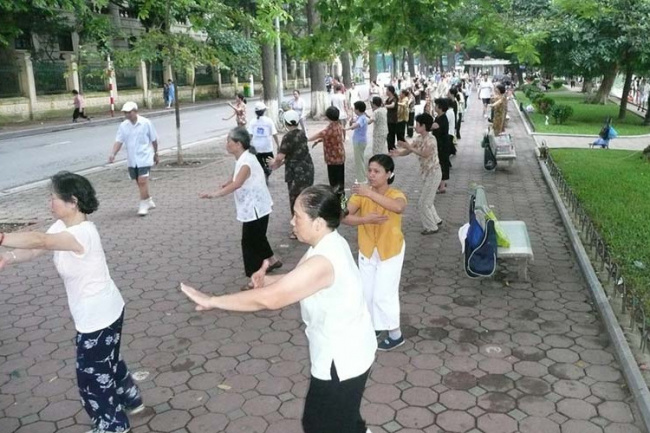 In the afternoon most people just walk around the lake to escape the busy streets of the city. There is a very relaxing atmosphere.

In the evening the red bridge, the temples and the Turtle Tower are beautifully lit. In the evening it is a lot busier, with many locals and tourists coming here to rest from a busy day. There are many people walking around or sitting on the benches and again some people exercise and go dancing. Young couples come here to date and friends spend time here together.

The most famous sights on the lake are the temple and the iconic red bridge. Via the Huc bridge you can walk to the island on the lake where the Ngoc Son temple is located. This island on which the temple is built is known as Jade Island. It was built to commemorate Tran Hung Dao, a 13th century military leader. The temple complex contains a number of interesting structures, altars and artifacts. 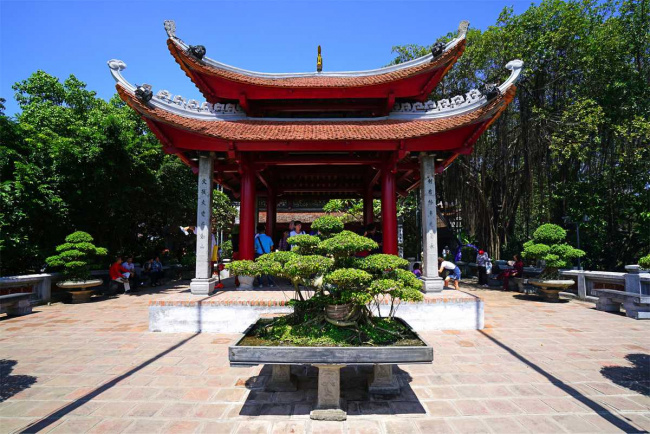 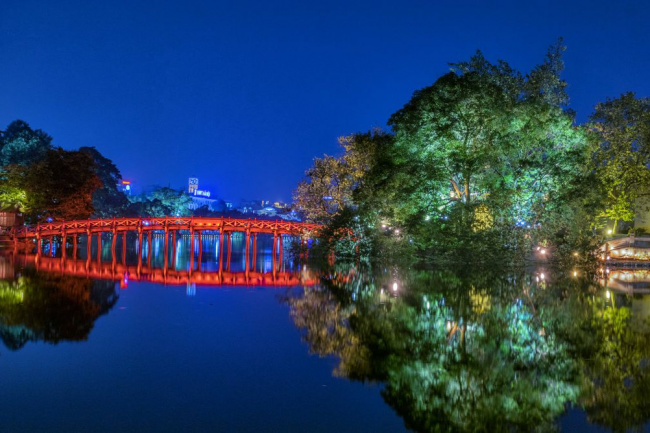 There was a turtle that lived in the lake that was thought to be the reincarnation of the mythical turtle. This huge turtle was one of the last of its kind (Yangtze softshell turtle, now almost extinct). Sadly, she passed away in early 2016 and the whole country mourned her death. She can now be found in the temple complex. 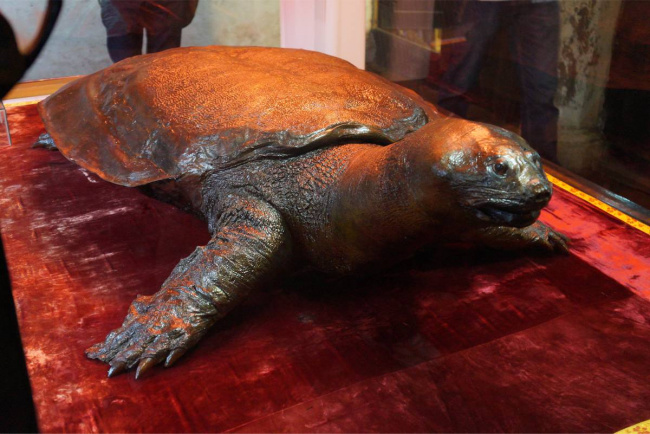 The Turtle Tower (Thap Rua) is located on an island in the middle of the lake. In the story of Hoan Kiem Lake, there was a giant tortoise that returned its master’s sword. After this, turtles were revered around Hoan Kiem Lake. The Tortoise Tower was built in honor of the magical tortoise who guards the sword. The tower is located on a small island in the middle of the southern part of the lake. You can take beautiful pictures of this tower on both sides of the water. This place is also beautifully lit in the evening. 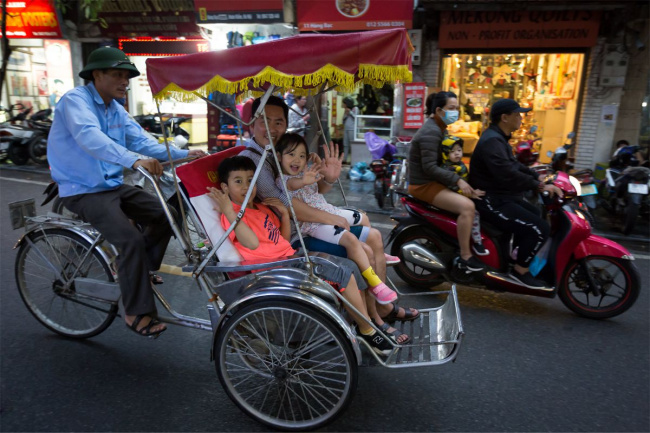 A fun way to see the lake and less tiring in the heat is with a cyclo. This bicycle with a seat in the front where you can sit with two people make trips through the city. You can combine a cyclo tour around the lake with other sights in and around the old city center of Hanoi.

Right next to the Hoan Kiem Lake you will find the Thang Long theater where you can watch a traditional water puppet show. Artists stand in the water with puppets with which they portray a number of short sketches about the history and culture of Vietnam. The show is accompanied by a small orchestra with a number of traditional Vietnamese instruments. It is a unique experience and definitely a must do when visiting Hanoi.

6. Hoan Kiem in the weekend

It is worth mentioning Hoan Kiem Lake separately on weekends. In the late afternoon on weekends, many streets around the lake are closed to cars, buses and motorcycles. This changes the entire atmosphere!

Many locals come to the lake during this time. The streets have suddenly become a stage for playing games. Children ride in small toy cars, older children play with balls or a skipping rope and the adults play Da Cau, a Vietnamese sport where you kick a kind of shuttle ball to each other without it hitting the ground. 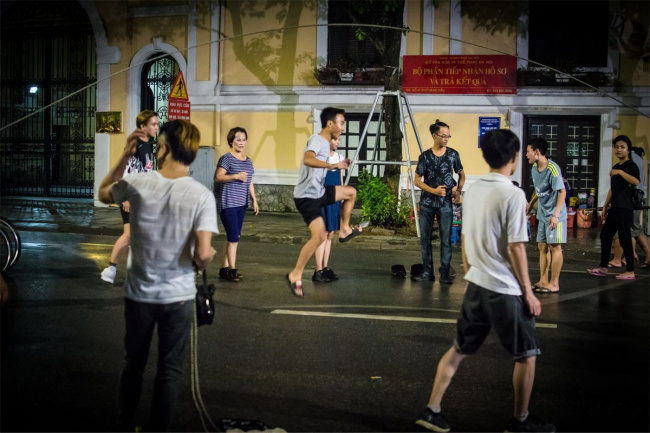 Between games it is busy with people taking a quiet walk or claiming a place to dance with a group. You can get a drink or ice cream at a coffee shop or bar and walk around to participate in this pleasant bustle or to watch it quietly from a bench. If you are walking around the lake or sitting on a bench, it is very likely that students will approach you to talk with them. Many Hanoian students walk around the lake looking for foreign travelers to practice their English. For you it is an great opportunity to learn more about local student life. You can also, of course, polity refuse.

8. Sights & museums around the lake

Combine a visit to the lake with the many sights around it. In the map below yo can see an easy overview of where the attractions around the lake are located.

North of the lake you will find the old town, also called the Old Quarter. It is a great place to explore the old streets and small alleys as well as finding some of the best food Hanoi has to offer.

The St Joseph’s Cathedral is half way down and just 300 meters walking from the west side of the lake. It is the oldest church in Hanoi built in French colonial times. Right next to this cathedral you will find the a small pagoda called Ly Quoc Su Pagoda.

South of the lake you will find two museums and the Hanoi Opera House. The Opera House is another beautiful French colonial building, where you can still watch a show. The Hoa Lo prison museum was first a place where political prisoners where kept during the French colonial times and later American soldiers (mostly pilots) during the Vietnam war. In the Vietnamese Women’s Museum you learn more about the life of women in Vietnam, such as during war and the unique ethnic minorities. When you wake up early in the morning at about 5 a.m., you’ll see groups of seniors and teens doing sports, from yoga to tai-chi to aerobics and fitness.

In the afternoon you will find many students chatting with tourists to improve their English language. Artists make paintings of the lake and portraits of people and a number of street stalls selling drinks and souvenirs.

In the evening you see many couples walking hand in hand along the lake. The lake with the temples is then beautifully lit. You will also see many groups of local people training along the lake through dancing.

The best to visit Hoan Kiem lake is in the weekend (Friday, Saturday and Sunday). The streets around the lake and in the old quarter will be closed to motorized vehicles. No noise from cars and scooters and a great atmosphere. On the street around the lake people are playing games and things are being sold

If you are at the airport, you first have to travel by taxi or bus to the Old Quarter. From any place in the Old Quarter you can easily walk to the Hoan Kiem Lake. You can also take a taxi, although keep in mind that the streets are small and during the day and later afternoon there is a lot of traffic, so it might be more comfortable but not a lot faster. You can also choose to go there by motorbike taxi or a more fun traditional way is by cyclo tour.

Từ khoá: Hoan Kiem lake – 8 highlights you can do & see yourself