Hue is a gorgeous city in central Vietnam between Hanoi and Hoi An. We spent 2 days in Hue after arriving via the Hai Van Pass.Hue is a fantastic addition to your Vietnam itinerary due to the city’s historical importance. The main attractions are the Imperial City and the tombs – which are less morbid than they sound and more like temples or palaces by our standards.
Since there are so many I’d recommend splitting them up across two days. We also made a trip to the Abandoned Waterpark, a quirky addition to any Southeast Asia bucket list. I’ll cover this on day two…

How to get around Hue

The attractions in Hue are based across the countryside so getting around is something to consider. Your options are: 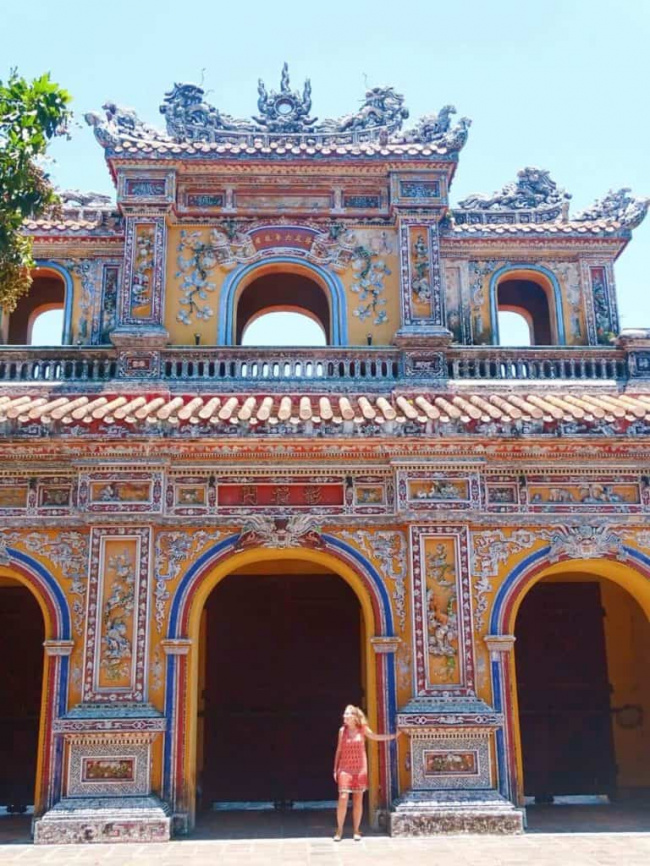 Otherwise known as the Citadel, this is without a doubt one of the most impressive places in Central Vietnam and one you shouldn’t miss during 2 days in Hue. When I passed through Hue for a day in 2015 it was basically the only thing I did!The Citadel was the centre of the last imperial dynasty of Vietnam which only ended in 1945. Since then, the Hue Citadel has seen two wars and been virtually destroyed and rebuilt. You can spend a good few hours exploring the various temples, gates and courtyards, some of which are insanely detailed and colourful.
Entrance price: 150,000 VND. 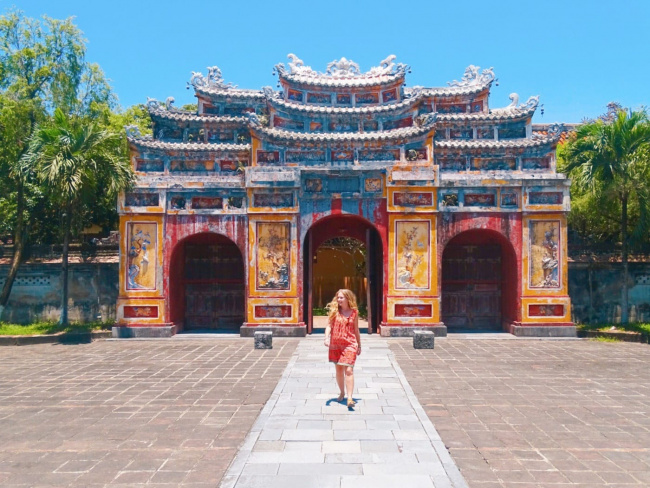 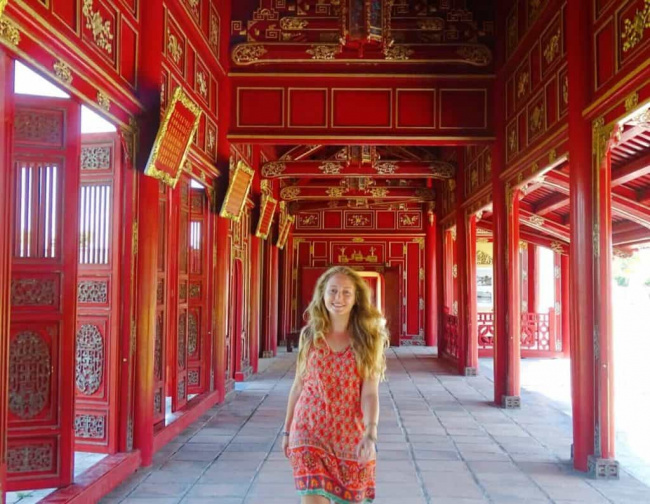 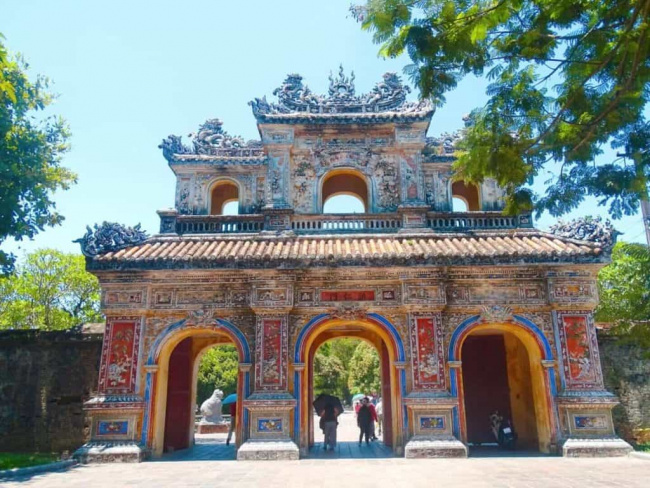 After a morning at the Citadel, stop for some lunch. I’d recommend Nook Eatery which I’ll mention again in the foodie section towards the end of this post. Afterwards, head to…

The Royal Temple of Tu Duc 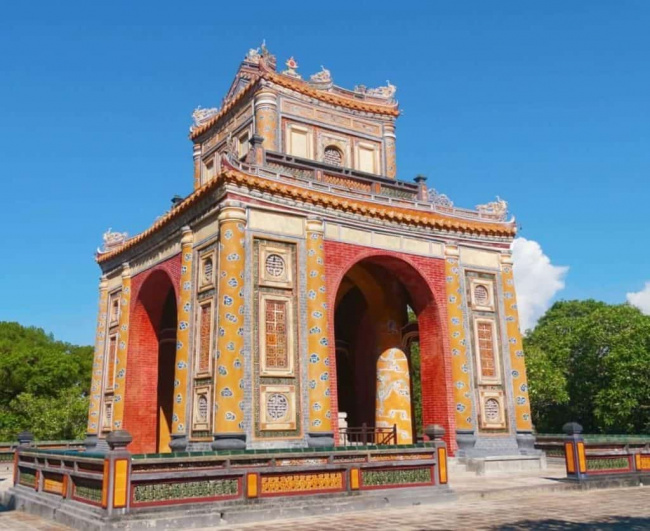 This peaceful temple site made me feel like I was back in Beijing. Colourful temples towered about elegant lilypad ponds swimming with Koi Karp. 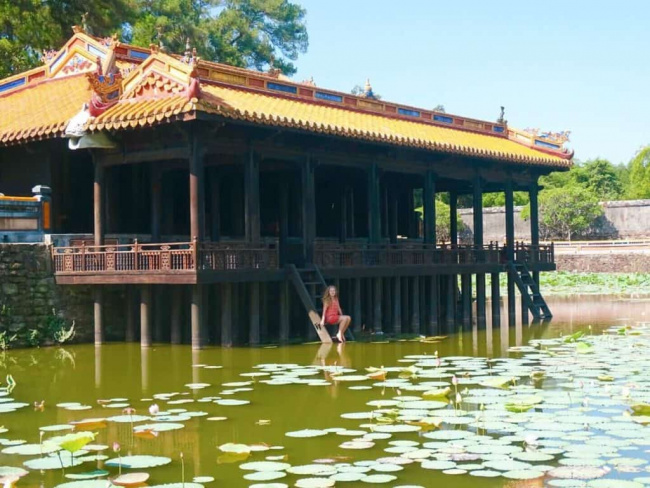 Emperor Tu Duc built this mausoleum in advance of his death, something I always find a bit morbid!The most interesting and shocking fact I learnt was that all 200 of the men who helped bury Emperor Tu Duc were beheaded to keep the location safe from grave robbers. Not only did Tu Duc have 104 wives, but the forced labour involved in building his tomb also caused an uprising that was suppressed. It sounds like he was an extremely powerful (and evil!) man…
Entrance price: 100,000 VND. 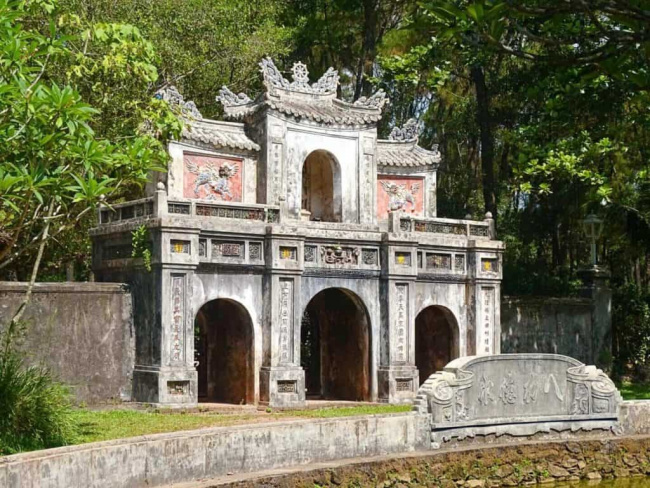 Just a seven-minute drive from Tu Duc is this much quieter and smaller temple site. It isn’t nearly as grand but it’s a nice contrast – entrance was free and we were the only people there!
Around 70 monks live at this pagoda nestled within the surrounding pine forest. They chant several times a day so you might be lucky and catch them mid ritual. If you’re visiting Tu Duc, definitely stop by.

For your evenings in Hue, start with a sunset by the river! If you’re feeling fancy, watch it with a cocktail from the rooftop bar at the Imperial Hotel. Grab dinner at the Night Market between 5pm and 11pm.

For your second day in Hue, head out on an unusual adventure if you’re up for it… 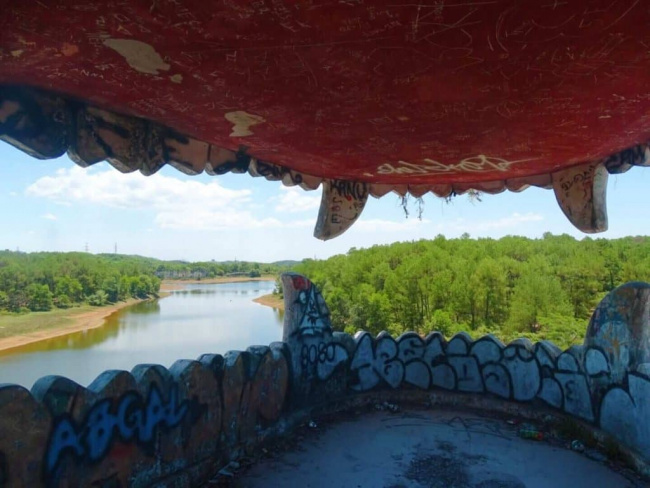 The craziest thing we did during 2 days in Hue was bribe a security guard, hop on the back of a scooter and trek through the forest to get to the Abandoned Waterpark which we’d read so much about!
Is it for you? Unless you’re up for a challenge, probably not! It’s not exactly the famous temples and tombs that most people come to Hue for. However, it was different and quirky so I loved it. Read my guide to the Hue Abandoned Waterpark. 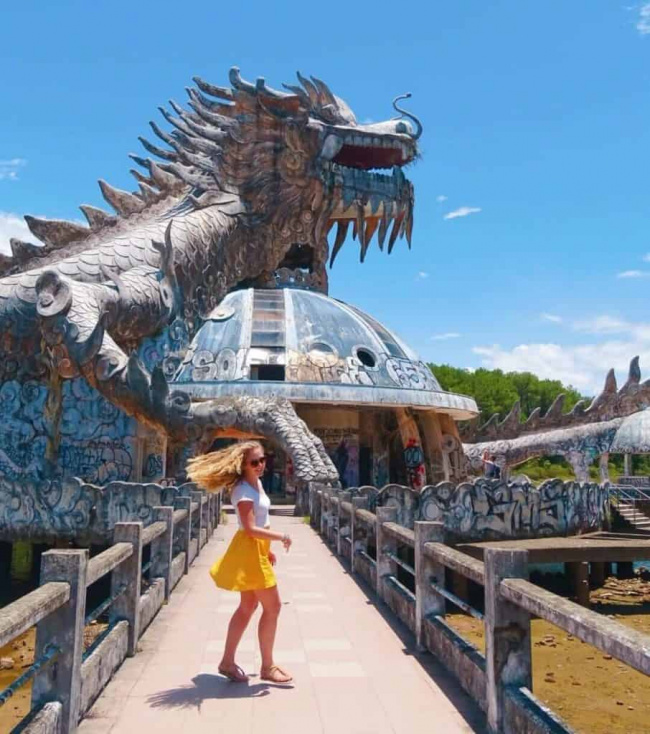 For the afternoon, get back on the tomb scene starting with…

The Tomb of Khai Dinh

The most interesting thing about Khai Dinh? The outside it’s entirely made from grey stone but once you get inside it’s SO colourful and detailed! You’d never expect it from the outside. Khai Dinh was the 12th emperor of the Nguyen Dynasty meaning it’s one of the newest tombs at just under 100 years old. 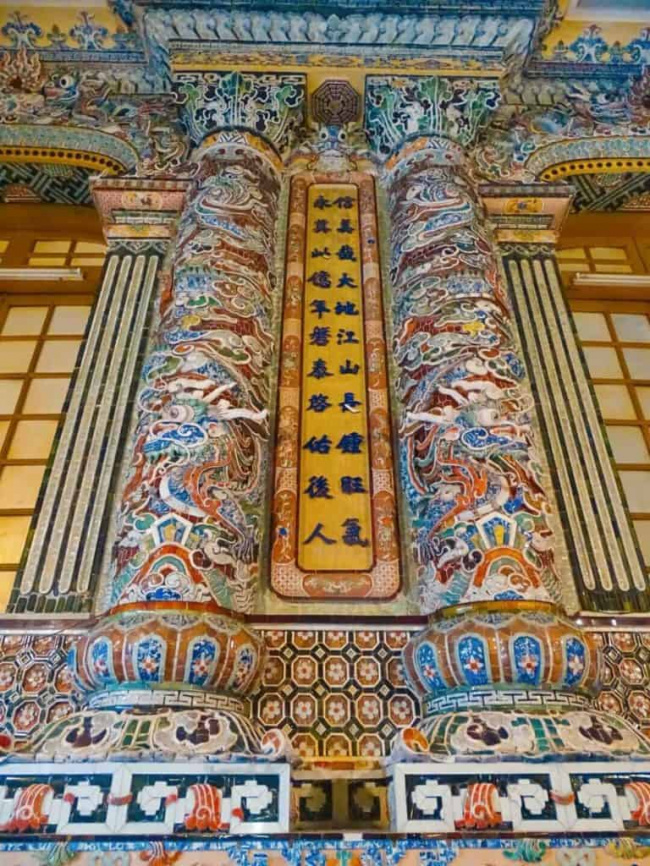 The stone soldiers and elephants in the outside grounds are a reason to visit – as are the views from the top over the green countryside and mountains! I think this was my favourite tomb in Hue due to the colourful interior.Like many of the Hue tombs, the people of the time paid for the construction. Taxes were raised to 30% whilst it was being built, something people were unhappy about as Khai Dinh was so unpopular. Vietnam was under French rule and people described him as a puppet to the French.
Entrance: 100,000 VND. From Khai Dinh, you’re not far from this impressive site. It reminded me of the previous day’s visit to Tu Duc with its relaxing lake and lilypads. In the 40 acres of walled grounds comprising Emperor Minh Mang’s final resting place, there are 44 structures dedicated to him.
Entrance: 100,000 VND.

You’re probably feeling templed-out by this stage but if you have energy left, I’d recommend a trip to these two sites on the Perfume Riverbank! 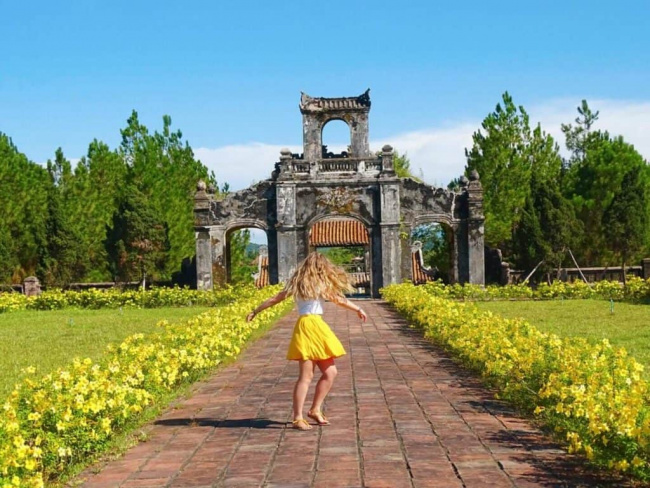 The Temple of Literature is surrounded by bright yellow flowers and features 32 giant stone scripts displaying the names of students who passed National Examinations under the Nguyen Dynasty.Just a few minutes around the corners is the Linh Mu Pagoda also known as the Palace of the Celestial Lady. It’s seven stories tall and was built in the 1600s in the memory of a local lady who foretold a prophecy of it being erected on that very hill.
Entrance to both temples: free! 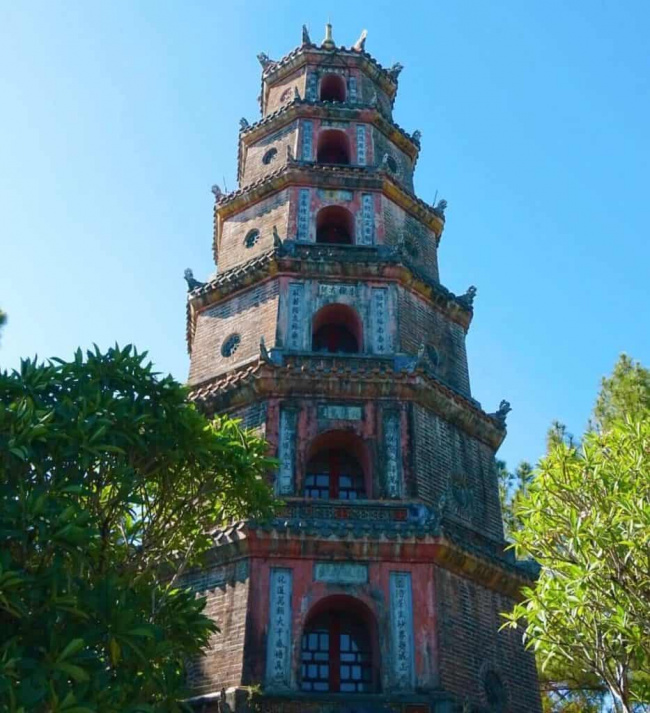 A really special way to travel between the main city and these two riverbank temples is by dragon boat. They run regularly and you can haggle on tickets – we got them down to 100,000 VND for a 30-minute journey. 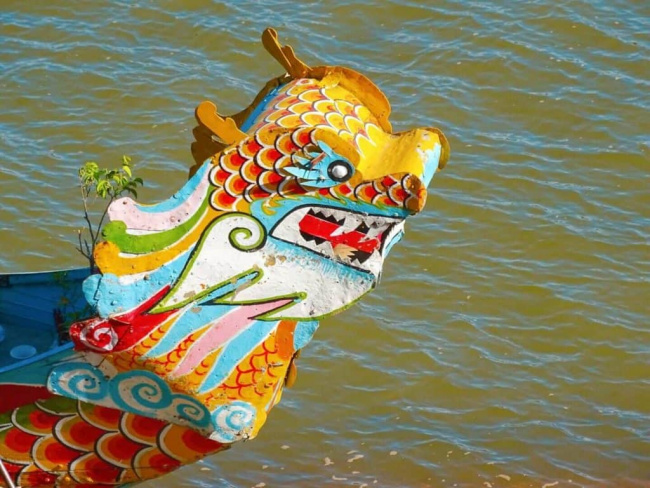 Where to stay in Hue

During our 2 days in Hue we stayed at Hue Ecolodge which is absolutely beautiful. It’s a totally peaceful and secluded spot with leafy walkways between the rooms (which are more like private cabins) and a stunning pool area. The breakfast buffet is to die for! 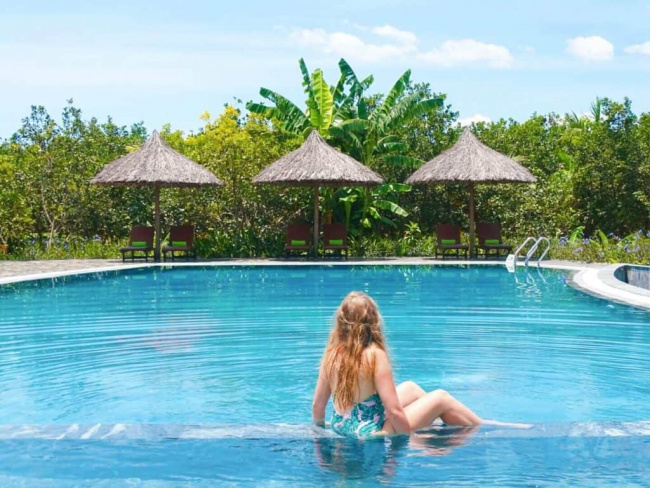 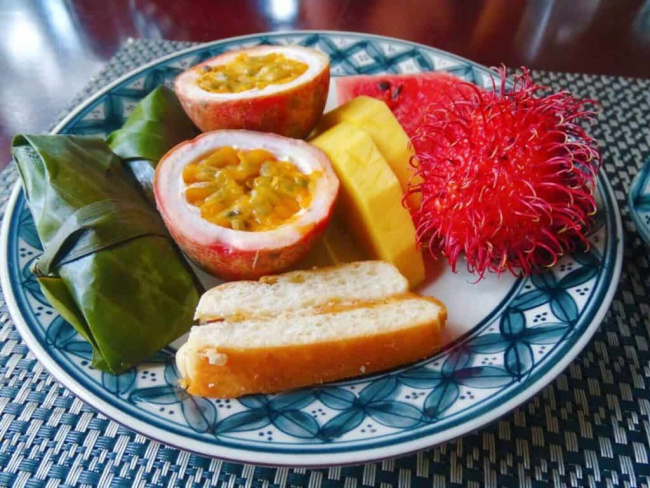 Hue Ecolodge is based a distance outside town but there’s a free return shuttle each evening should you fancy dining out.

What to eat in Hue? 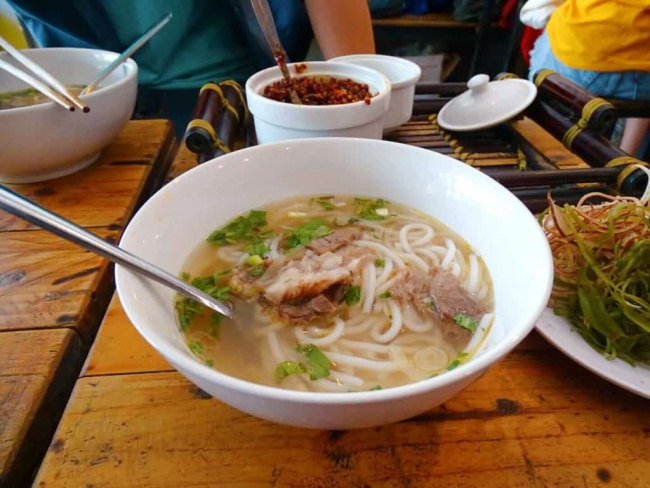 Where to eat in Hue

There are a lot of tasty places to eat in Hue as well as some popular Vietnamese dishes that were invented in the region. Look out for… 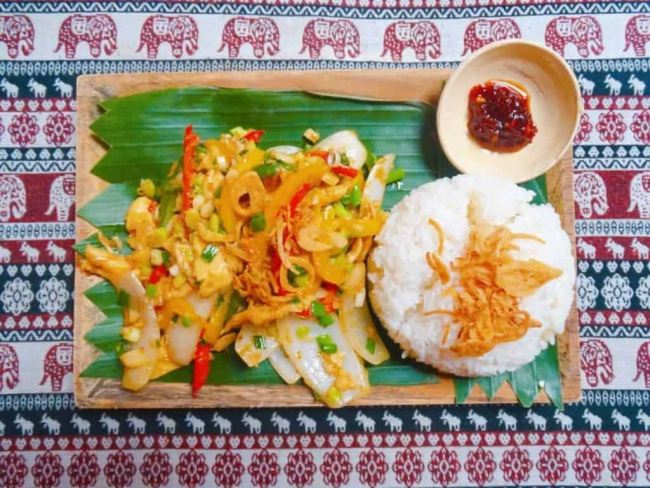 My favourite foodie find in all of Hue was this adorable cafe. Nook Cafe & Bar is full of character from the moment you see the lantern and bike-laden exterior. It only gets cuter inside with elephant print tablecloths and kitch wall art.
The food is well presented and very tasty with options ranging from burgers to Vietnamese street food. Most mains are around 100,000 VND. 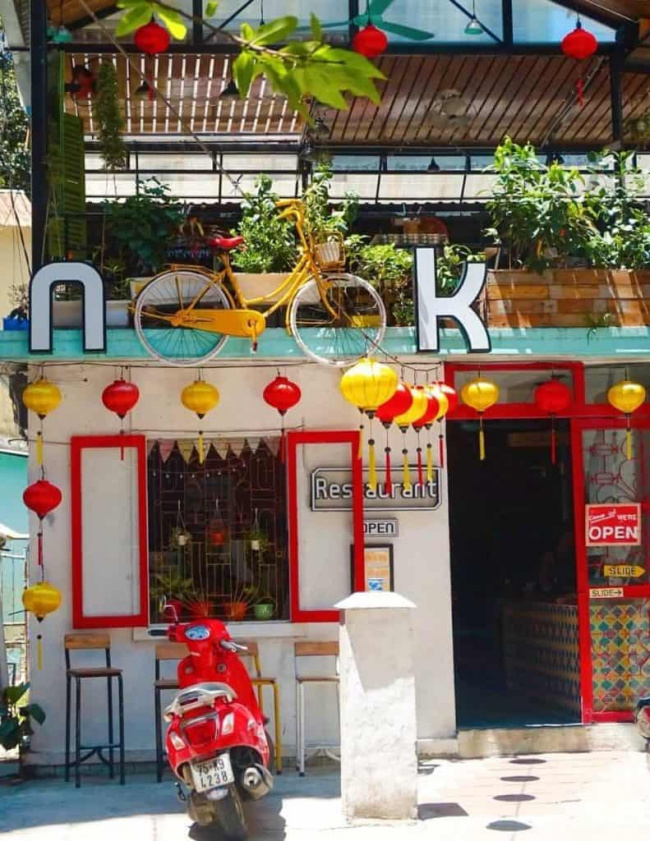 Around the corner from Nook is Nina’s Cafe, another cute cafe/restaurant. Here I ate bun thit nuong, one of my favourite Vietnamese dishes (pork with noodles, salad and spring rolls) for 70,000 VND. There are other Asian and Western options too, plus veggie options. 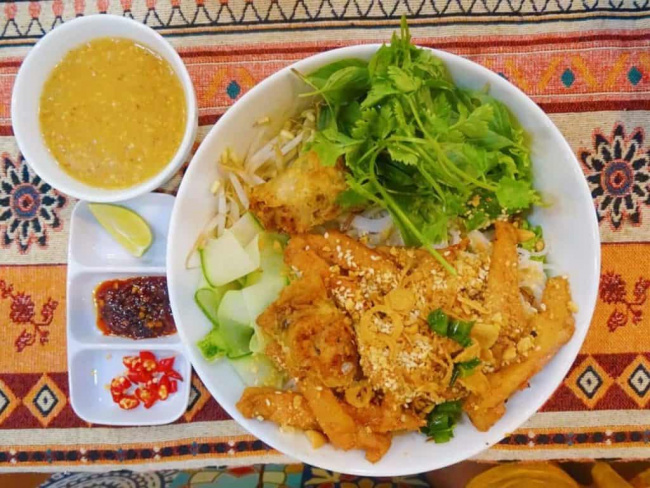 An Instagrammable cafe not to miss

We glanced these teacup style tables from outside and knew we had to get up close! The One Cafe and Bakery on Hùng Vương serves coffees, teas, matcha lattes and giant fruity concoctions, plus it’s an icy-cold place to escape Vietnam’s heat. Many backpackers arrive in Hue by bus which is a cheap and easy option during a Southeast Asia backpacking itinerary.If you’re coming from the north, it’s an overnight journey from Hanoi which arrives in Hue early in the morning. From the south, it’s a three-hour journey from Hoi An. Tickets are cheap and can be booked online or at any tour agency.
For a more beautiful journey to or from Hoi An, consider taking the train. Our journey only cost $5 and included a stretch on this stunning coastline. 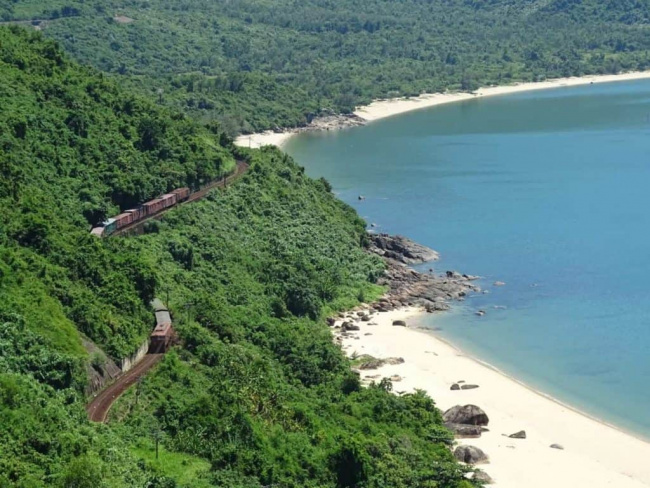 See that train snaking along the coast? Yup!

For an even MORE beautiful journey, think about taking the Hai Van Pass. This stretch of amazing coastline runs between Hue and Hoi An and can be driven by scooter or Jeep either independently or as part of a day tour. Read about our day in my Hai Van Pass travel guide. 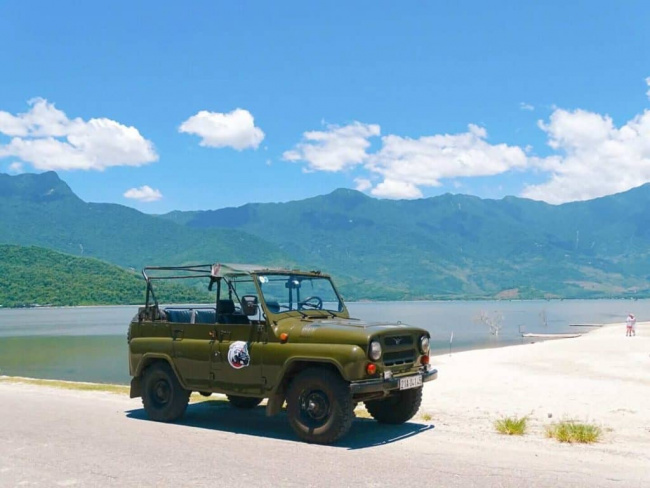 I hope my blog’s given you a better idea of how to spend your time in Hue, and where to sleep, eat and drink. If you need any more help, drop me a comment below.

Rose is a solo traveller from the UK who has been on the road since 2015. She wants to show other women that solo travel isn’t scary and doesn’t have to be expensive! Rose has lived in Mexico, Canada and all over Asia, seeking out food, bubble tea and street art wherever she goes!