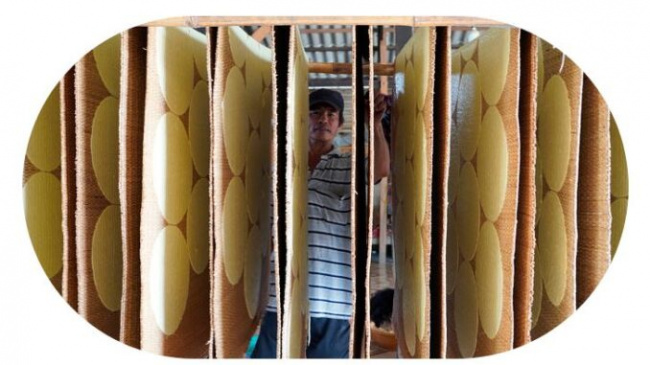 Early in the morning at the end of the year, the village of puff pastry in hamlet 1, Hung Nhuong commune, bustling with the rattle of the dough machine. Along the two sides of the road, groups of workers take turns bringing bread mats to dry. The whole road is more than a kilometer long covered in white, bringing up the aroma of freshly baked puff pastry.

Inside the bakery, which is about 1,000 m2 wide, holding a bowl of freshly milled glutinous flour, Mr. Cao Van Mang (65 years old, factory owner) quickly put the dough into an electric-powered mortar. While the pestle is regularly pounding the flour, underneath the mortar rotates to make the dough tough, Mr. Mang in turn adds sugar, salt, coconut milk and chopped scallions. After about 30 minutes, the test is passed, the dough is taken to the rolling machine, pressing the cake forming frame.

At the press, three workers are on duty, using mats on the conveyor belt to catch the cake. Workers quickly remove the excess flour on the mat, then take the cake to dry. 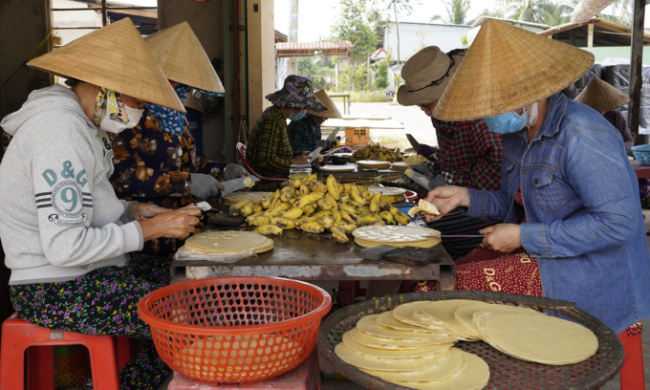 Mr. Mang’s family has been making puff pastry for more than 30 years, in the past, the flour mill used a stone mortar, all stages such as rolling and drying had to be done by hand for low productivity and dependent on the weather. Ten years ago, his family invested hundreds of millions of dong in a blower, rolling mill and dryer system, yielding 5.6 times more than manual baking.

While the batch of salty puff pastry had just finished drying, outside the factory, Ms. Nguyen Thi Hang (42 years old) and a group of 10 female workers cut each ripe banana slice with a knife and quickly glued it to one side of the cake. Hang has been gluing bananas to puff pastry for 3 years, each cake is paid 300 dong. An average skilled worker earns about 6 million VND per month.

Because banana puff pastry takes a long time to dry, after gluing, the cake will be placed in a blister and put in the oven for about 4 hours to be packaged and delivered to the customer. “The factory has two types of savory puffs and banana chips, producing about 7,000-8,000 pieces per day on average,” the owner shared. 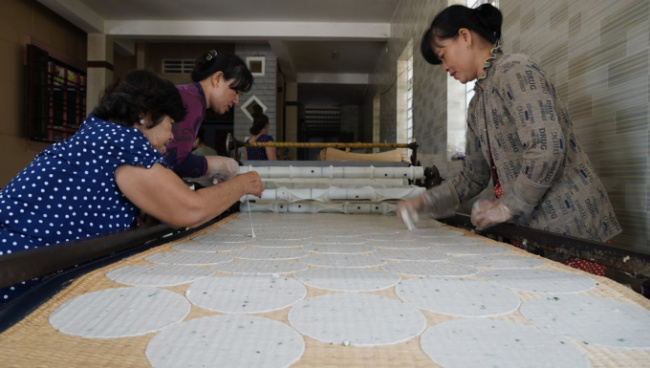 About 500 meters away, at noon, 6 workers at Ms. Nguyen Thi Lan Ngoc’s banh mi factory (36 years old) were making the last batch of cakes of the day. This is one of the large-scale bakeries of the craft village, each day producing about 10,000 cakes, peaking Tet up to 12,000-13,000 pieces. The process of making bread puffs is the same as other types, but the cake material will be boiled tapioca, then spread with flour.

The owner of the factory said that after a period of general difficulty due to the prolonged epidemic, this year’s puff pastry-making profession has recovered, many orders have returned. “If there are many orders, the factory will be closed until the 28th of Tet, the cake is mainly exported to Ho Chi Minh City and industrial zones in the East”, Ms. Ngoc said.