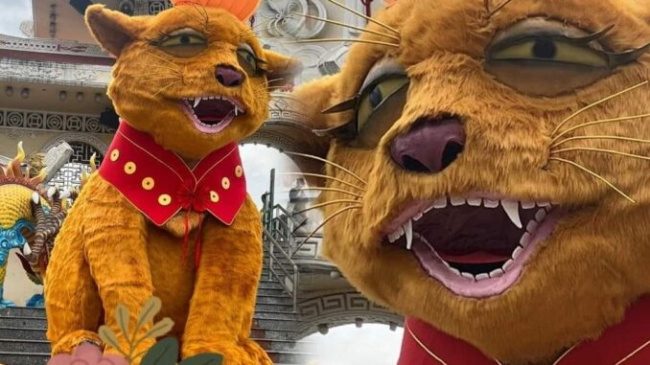 After the athlete cat in Ben Tre, the strange ugly chicken cat in Tien Giang, and the overly aesthetic cat in Thanh Hoa … the ranking of the “unique and tearful” mascots in 2023 has recorded more candidates from Ho Chi Minh City. HCM.

Just released, the image of the cat mascot welcoming the New Year at Suoi Tien Tourist Area (Thu Duc City, Ho Chi Minh City) has caused a stir in the online community because it is so strange.

The cat is shaped with fur like a fox, with an extremely bizarre facial expression – a grinning mouth but dull, lifeless dark eyes.

Under the posts shared on social networks , many readers commented that the cat seemed to be worried about catching mice all night and then in the morning Suoi Tien welcomed visitors. Some people even joked that this New Year, they don’t dare to come to Suoi Tien because they are afraid of cats!

Previously, the mascots from many provinces and cities across the country became a hot topic of discussion on social networks because of the unique way of shaping, only in Vietnam. No longer a “luxury” species with flexible “catwalk” steps taken as the symbol of the fashion model floor, the cat mascot through the hands of artisans becomes… strangely humorous!

( According to Thanh Nien)