The Long Bien Bridge is a place full history and the Long Bien market full local culture. They are located next to each other and both unique at their own way.

The bridge is already more than a century old and built in French colonial times. It even survived the Vietnam War after being bombed several times. The market is almost 25 years old, but it is one of the main arteries of the city, as it distributes food from all over northern Vietnam to the shops and restaurants in Hanoi. Be prepared when you visit it though, this is a very local and authentic market that is not designed for every tourist.

History of the Long Bien bridge

The Long Bien bridge is almost 120 years old, constructed from 1899 to 1902 during the French colonial time and designed by French firm Daydé-Pillié. It is the first steel bridge in Hanoi built by local Vietnamese workers. The bridge across the Red River was opened to traffic in 1902, running more than 1,691 meters long, with a rail track in the middle and road transportation on either side. It was named after Paul Doumer, the Governor-General of French in Indochina and President of France from 13 June 1931 until his assassination on 7 May 1932. It was not until 1954 when the Vietnamese completely defeated the French during the battle of Dien Bien Phu that the bridge was renamed to Long Bien Bridge.

After the war until today the bridge is still used. Parts of the bridge that were repaired by the government during the Vietnam war are still in use today. The road surface of the bridge is damaged in several sections. Despite the regular maintenance, the bridge carries worsening signs of wear and tear. 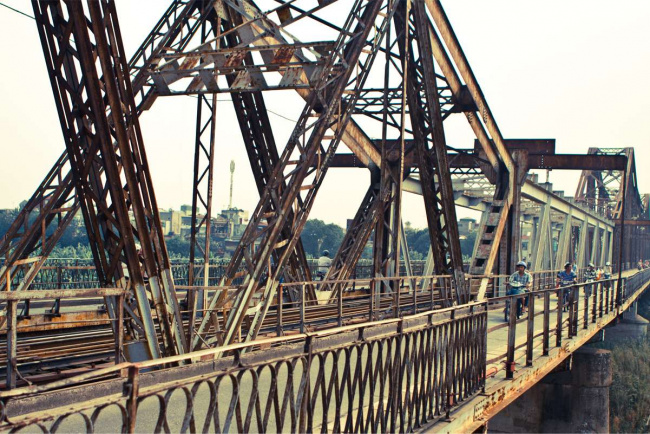 There is signboard asking people to to limit the use of the bridge, but because of urban developments along the Red River, thousands of motorbikes and bicycles cross the bridge during peak hours every day. Also the train uses the bridge up to 20 times per day. There have been plans for years to built new bridges over the river, but the plan remains on paper to date. 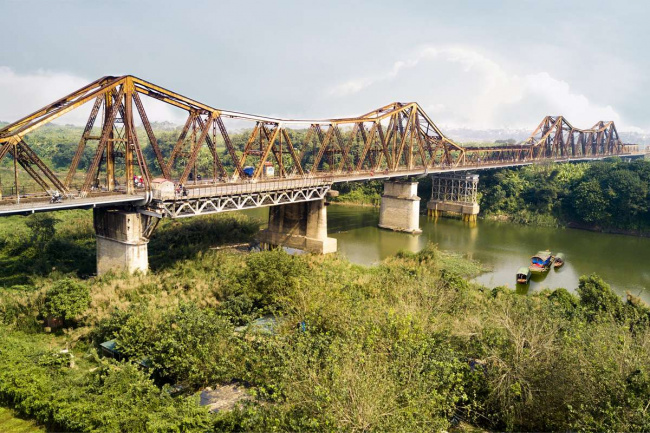 The main highlight is of course the bridge itself. It is not only a beautiful piece of architecture, but also a special surviving historical landmark, with an eventful history. It is the oldest bridge of Hanoi and one of five bridges over the Red river. It is a popular spot for photographers, young Vietnamese and for brides and grooms to do their wedding photos here.

The Long Bien Bridge is one of the best places to see the sunset and sunrise in Hanoi. If you come here for sunrise, you can combine it perfectly with the Long Bien Market. It is also great to see the train coming slowly over the old bridge, driving to or from the old city.

One of the best markets in Hanoi to visit is the Long Bien Market. It is mainly a wholesale market, where food from all over the Red River Delta region is brought to for further distribution to the shops and food stores in Hanoi. Like most wholesale markets in Vietnam, also this one starts very early in the morning, before most shops open. The peak hours are from 2 AM to 4 AM, when shop owners, local vendors, smaller markets and restaurants come to bargain for fresh food for the day.

The market collects food from all over the Red River Delta and northern provinces, such as rice, vegetables, fruit, meat, eggs and fish. Every night there are hundreds of trucks carrying these products from a lot of different provinces to the market. 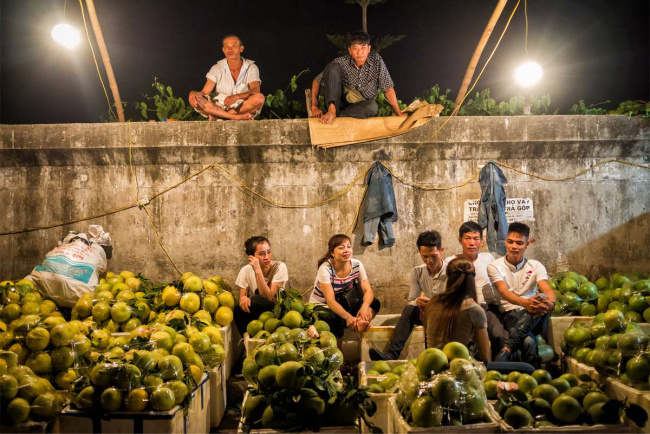 It is a very local and authentic market, but not made for everyone. It is a maze of food and often very noisy. With endless fruit hills just picked from the countryside and fresh herbs, it is an ocean of colors and smells. The market can also get quite dirty, especially on rainy days, so you should wear boots or easy to clean shoes. If you are not too picky about crowded places that are not too clean and you are interested in how the locals live their lives, this is worth a visit and will give you a unique experience.

Tip! If you are interested in another unique wholesale market you should visit the Quang Ba flower market; but also be prepared to wake up early.

The best time to visit the market is very early in the morning, from 2 AM to 5 AM. This is the most busy time, when trucks are arriving to bring the food and local shop owners and restaurants come to check the quality and bargain with the traders.

The Long Bien Train Station is one of the two main railway stations of Hanoi. It is not the most impressive station, but the location right in the residential area makes it quite unique. Unlike the famous Hanoi Train Street, where the train runs right next to the houses, this station is built partly on a higher elevation. Although, the train track from the station to the bridge, you can find a very similar scene with less tourist. If you are in the area, a quick visit is worth it.

The Long Bien station is just 900 meters from the heart of Hanoi Old Quarter, just on the edge. The beginning of the Long Bien Bridge is a bit further, around 1,5 km. You can walk to here or take a taxi (motorbike or car).

Where to go next

As mentioned, the Old Quarter is very close to here, so you can perfectly combine these places. Just a few hundred meters from the Long Bien Railway Station is the Dong Xuan market, the biggest market in Hanoi. It is great to visit this market and if you have just seen the sunrise at the bridge, this might be a good place to find some breakfast. There are not many other places you can visit in walking distance.