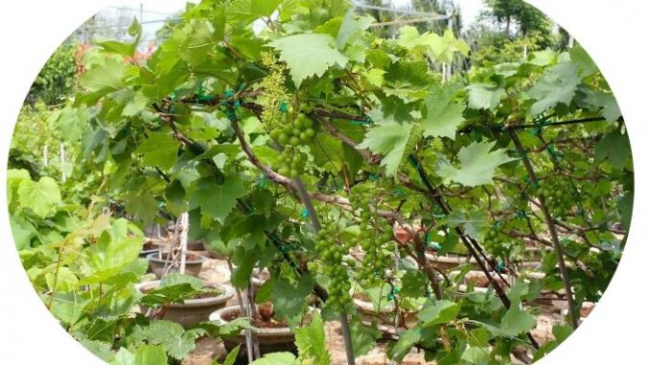 Gardeners in Ninh Phuoc district are busy taking care of ornamental grapes in order to sell them on the occasion of the Lunar New Year 2023, with many eye-catching shapes, each pot costs from 1-3 million VND.($1=25,000 VND)

At the beginning of December, Phuoc Thuan grape village, Ninh Phuoc district becomes lively. In addition to grapes cultivated to sell fruit in the traditional way, here, some gardens also grow ornamental grapes. At this time, garden owners and workers are busy taking care of them to ensure they are sold in time for the Lunar New Year. 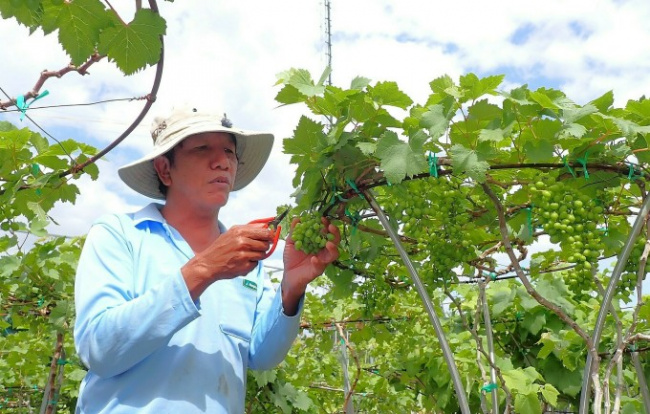 Mr. Do Van Thu, 56 years old, is taking care of an ornamental vineyard with more than 1,000 roots, said that most of the pots bear fruit, in time for the season. Recent rains have damaged some of the roots, but with meticulous care, the rest are still in good shape. Although the garden has not been sold, the bonsai termites in Hanoi and Ho Chi Minh City have pre-ordered.

According to Mr. Thu, in previous years, ornamental grapes were made simple, but recently they are eye-catching by gardeners to look more attractive. Grape branches are bent into eye-catching models such as: solar batteries, wind turbines, 3-storey circles, 1-storey circles… according to predetermined shapes on iron frames or bamboo rods.

In order to have a bunch of ornamental grapes for Tet sale, gardeners must choose the strongest varieties in the vineyard to eat fruit grafted into the root prepared in pots from the middle of the year. Soil for ornamental grapes is mixed with sawdust, burnt rice husks, and organic fertilizers to make it loose. This is to help the roots grow healthy, the vines keep for a long time. 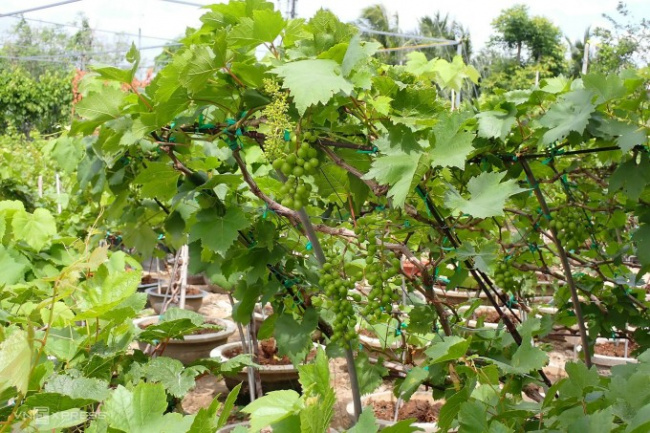 After shaping, the old enough vines are pruned and watered. From the old eyes (eyes) will sprout new shoots to flower and bear fruit. The care process is quite elaborate. Every day, the gardener uses small scissors to inspect and prune the bunches of fruit evenly, and at the same time trim away the leafy leaves so that the bunches of fruit show off their eyes. “A beautiful vine must have leaves and fruit evenly. Having leaves without fruit or having fruit without leaves are criticized,” said Mr. Thu.

Mr. Le Ngoc Hoai, who has more than 30 years of growing fruit grapes in Phuoc Thuan also said that his family started growing ornamental grapes about 5 years ago. At first, he just planted a trial plant for Tet, then saw many people asking to buy it, so he planted a lot to sell. “Recently, many people like to display ornamental grapes in Ninh Thuan on New Year’s Day because strangely, the tree has beautiful red fruits, wishing for good luck at the beginning of the new year. Each pot costs 1-3 million dong, depending on the shape, height and low.” Mr. Hoai said.

According to Mr. Thu, ornamental grapes must be given fruit 22 days before Tet. When customers buy the fruit is still green, on the 1st of the New Year the grapes will be ripe and half red, by the 10th, the whole bunch of red grapes will be very beautiful. “The grapes ripen gradually red in the first days of the new year, creating excitement for ornamental players,” said Thu, who said that after celebrating Tet, you can separate the pot, put the ornamental vine out in the ground, and let it climb. fences, porches, terraces, creating a very beautiful home facade decoration. 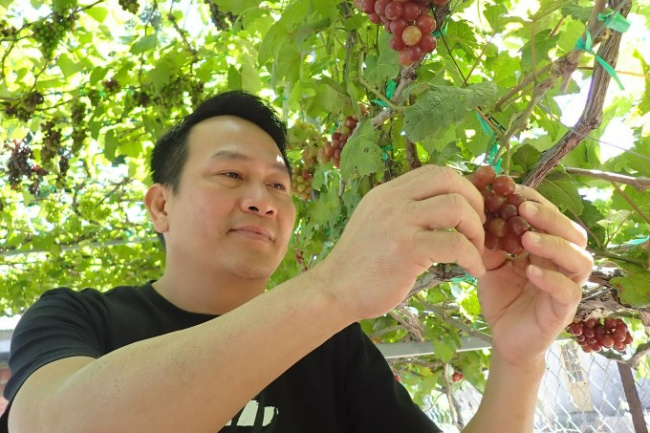 Mr. Le Ngoc Cuong, Director of A8 Phuoc Thuan ornamental grape cooperative, said ornamental grapes are one of the typical products of the sunny and windy land of Ninh Thuan. This type of ornamental plant is being consumed strongly by people. After two years of quiet epidemic, now the market has started to be active again.

“Currently, traders from the North and the South have come here to buy ornamental grapes, by the full moon of December this batch of grapes will be sold out,” said Mr. Cuong and said ornamental grapes in Phuoc Thuan are grown entirely organically. birth, should be sure to eat after ripening.

This year, A8 Cooperative planted more than 10,000 ornamental vines in 4 gardens in Phuoc Thuan grape village. Grapes for sale as ornamental grapes for Tet are mainly red grapes of Ninh Thuan. In addition, this place is growing more types of grapes: Seven colors rainbow, peony, heart… In addition to the cooperative A8 Phuoc Thuan, the whole province of Ninh Thuan currently has more than a dozen other households that are also developing planting models. ornamental grapes to supply the market every Tet holiday.