The Pac Bo cave in Cao Bang is a historical place where Ho Chi Minh, the leader of independence movement, arrived back in Vietnam after 30 years. It is a pilgrimage for many Vietnamese, but it is also a beautiful area to visit for all.

Pac Bo is on the border with China. When Ho Chi Minh came out of Guangxi province in January 1941, he set foot on Vietnamese soil for the first time in thirty years. He settled in a Nung village, but soon moved to the cave. There he coordinated the independence movement and began the Vietnamese translation of the history of the Communist Party of the Soviet Union. In the end, Ho Chi Minh only lived there for 7 weeks, in February and March 1941

When the French discovered his hideout, Ho had to move again, this time to a cabin in the jungle close to where the Vietminh was founded in May 1941. Later that year, he went to China to seek support for his army under construction. His next visit to Pac Bo was as a tourist in 1961 after independence.

What to see and do at Pac Bo cave?

At the entrance there is a kiosk where you can buy entrance tickets 20,000 VND (less than 1 dollar). There is a shrine dedicated to Ho Chi Minh and a museum about his life through displays, photographs, and memorabilia. From here it takes 10 minutes walking or a short 5 minute ride by electric buggy (included), to the beginning of the path around Pac Bo cave.

Hang Pac Bo, the “Waterwheel Cave”, is located in a beautiful landscape with forests and limestone rocks. Ho Chi Minh took up residence in this small cave, 3 km from the Chinese border, in 1941 after years of wandering. Along the path along the river, baptized by Ho Chi Minh to Lenin Creek, are places that keep the memory of the revolutionary alive, such as the place where he fished and the rock where he wrote. The cave is a kind of pilgrimage site for (future) officials who come to pay their respects to Uncle Ho. Due to its serene location, the cave is also interesting for foreign visitors. 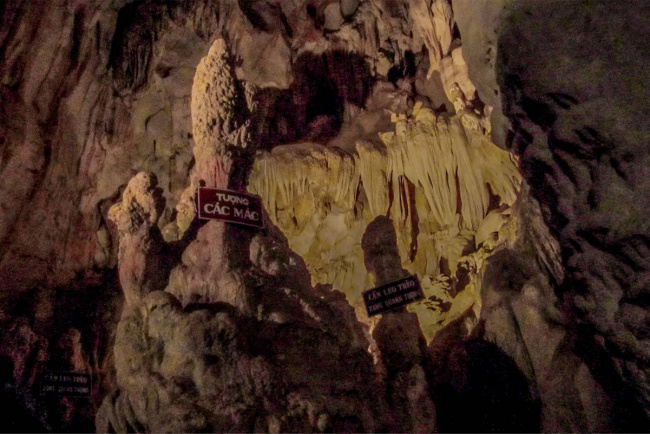 It is great to walk along the Lenin Stream that flows past the Pac Bo cave in the bluest and crystal clear water. The peace and tranquility you experience in Pac Bo is regularly accompanied by a group of picnicking Vietnamese or couples who are more than happy to share their love by the water. 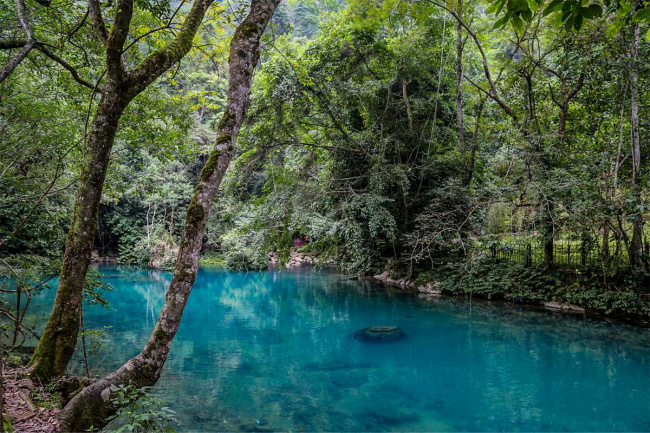 Is it worth visiting Pac Bo?

If you don’t like Ho Chi Minh memorabilia, then neither the cave nor the the small museum is worth the fifty-kilometer trip (four hours round trip) from Cao Bang. However, the first part of the journey along minority villages between the rice fields, against the background of a blue horizon, is very beautiful.

Some excursions from Hanoi include a visit to the cave, but you can also go there on your own. To get from Cao Bang to Pac Bo, cross the Bang Giang River in a northwest direction up the road to Ha Quang until a sign directs you to the right. From this fork it is another 4 km to the entrance. Public transport to the cave is not easy as there are few buses between Cao Bang and Ha Quang. If you do go by bus, get off at the fork to Pac Bo, two hours from Cao Bang and take an xe om (motorbike taxi) for the last part.

Other things to do and see in the area 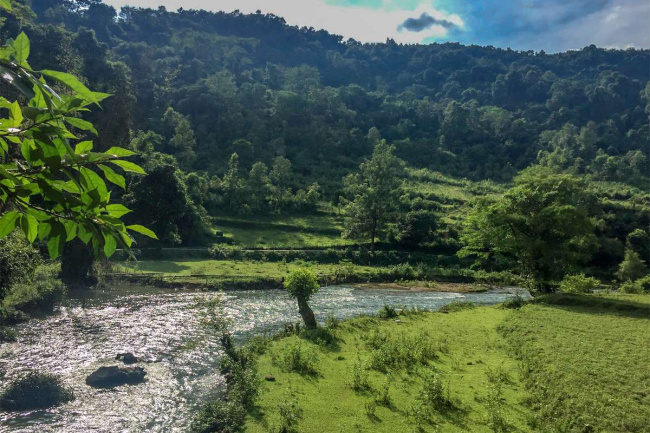 There are no other things to do around Pac Bo, but it is very nice to drive through the beautiful scenery. If you are coming from Cao Bang City, it is very beautiful to continue your drive to Bao Lac, through Xuan Truong and over the stunning Me Pja Pass. It brings you to some of the most remote villages of north Vietnam where you can experience authentic lifestyle of the minorities.

North of Cao Bang you can visit the famous Ban Gioc waterfall and the less known, but extremely beautiful, Phong Nam valley.