A short drive from Hanoi you will find one of Vietnam’s most important religious Buddhist sites. The Perfume Pagoda (Huong) is a cultural and religious site, with dozens of Buddhist temples, pagodas, hidden among the mountains and forests of Huong Son.

About the Perfume Pagoda

The Perfume Pagoda is actually a group of temples and caves in the rocks of the limestone mountain Huong Tich Son (Mount of Fragrances). The pagoda is located in Hoa Binh province, in My Duc district, 60 km southwest of Hanoi. Most of the cave temples were built in the 17th century. It is considered as one of the most important complexes of temples in Vietnam.

The first temple is believed to have been built here in the 15th century, although legend states that the site was actually discovered more than 2,000 years ago by a Buddhist monk who meditated nearby. The foothills of the mountains are an area of ​​great natural and spiritual beauty filled with streams, tropical plants and temples.

There are many pagodas to visit, each with a different shrine, most of which are Buddhist, although one or two are animist. The perfume pagoda attracts pilgrims and tourists seeking happiness from the stalagmites and stalactites in the cave who are named based on the individual blessing they can bestow.

1. The boat trip on the Yen River 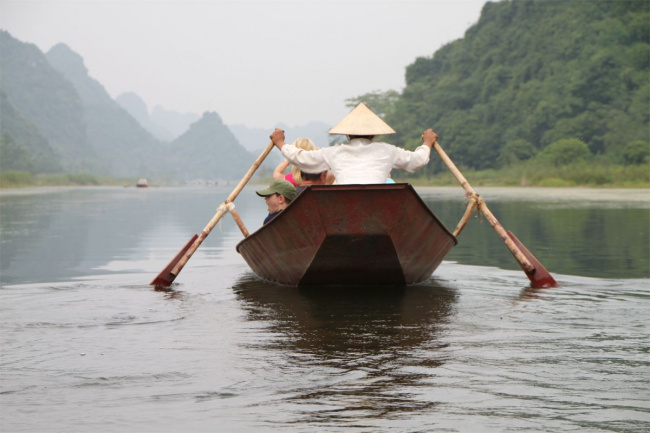 The pagoda can be reached by road or river. The nicest way to get there is by a one hour boat trip from Ben Duc village. It takes around two hours to get from Hanoi to the Pier Duc. Two women row the boats on the Yen-Vi (Swallowtail River), past jagged rocks and green rice fields. For a lot of travelers a boat trip over the Yen River (or Yen Stream) is the actual highlight of a visit to the Perfume Pagoda. 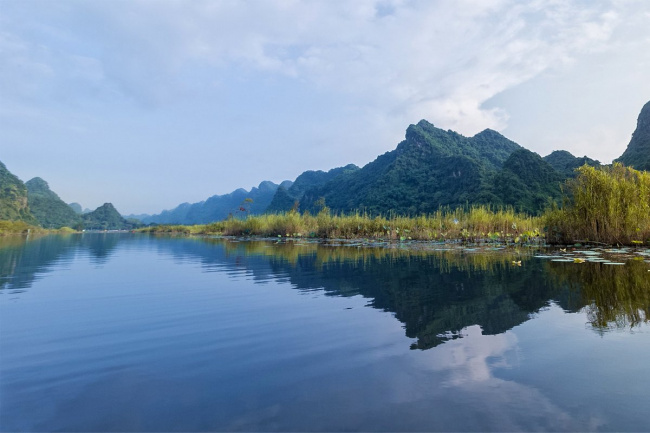 The boat travels through a narrow flowing stream surrounded by paddy fields, temples and grass and you have the option to stop and visit some of these temples and caves. However, if you’re short on time, it’s best to head straight to Huong Tich Cave.

After about one hour the boat will dock at the walled Thien Chua (Pagoda leading to Heaven). A steep mountain path leads from this pagoda to the top of Huong Tich Son.

The Thien Tru Pagoda was built in the 18th century during the King Le Thanh Tong dynasty. The name “Thien Tru” means heaven kitchen, which is named after the rock formations in this area that look like chefs that are busy with working in the kitchen. The pagoda also has a tower and there is a cave with five granite statues and various rock formations on the walls of the cave. 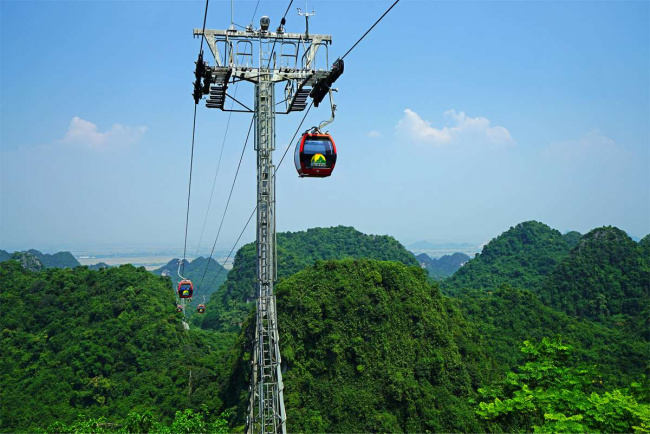 Huong Tich Son, the main temple of the Perfume Pagoda complex, can be found in a cave all the way on the top of the mountain. There are two ways to get there, either by a fairly tough one hour climb or by cable car. The cable car brings you to the top in just a few minutes and the views over the top of the trees with mountains on the background are very nice. You can also buy a one-way ticket up the mountain so you have just a less tiring walk down the mountain. 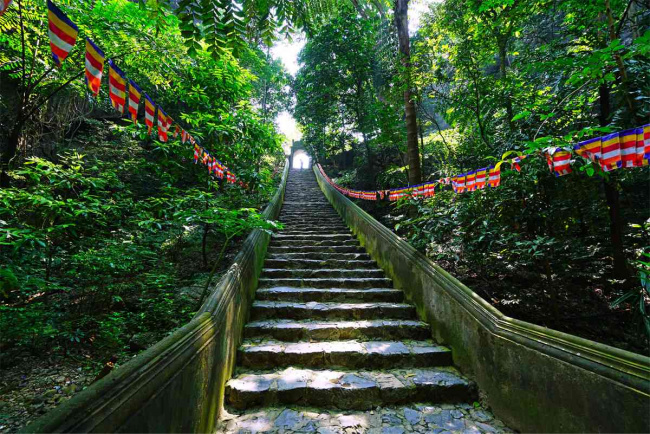 The uphill walk to the perfume pagoda can get slippery, so remember to bring walking shoes. Along the way you will pass several cave pagodas. The Ten Son Pagoda has some stone carvings. The Giai Oan Chua (Pagoda of Purification) attracts pilgrims who come here to purify their souls or seek healing from their illnesses. Childless couples pray for posterity. 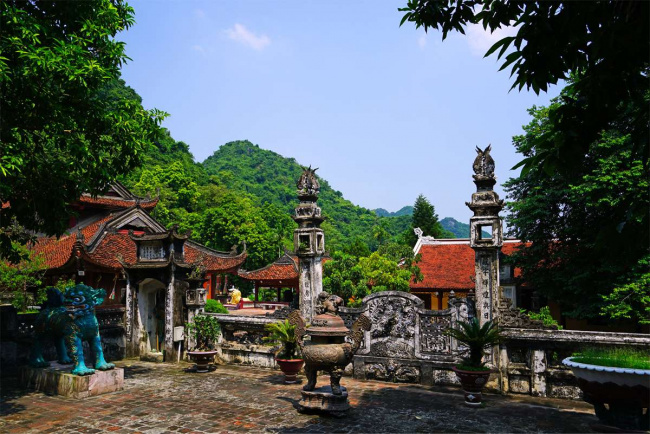 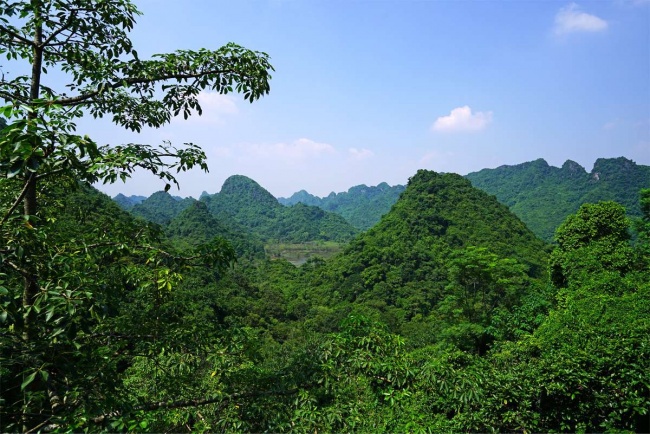 It’s worth taking the time to stop and enjoy the view on the way to the temple as the landscape is very interesting, dotted with fruit trees including apricots and medicinal herbs grown by local farmers. Other temples within the complex include Vong Temple, Thuyet Kinh Cave, and Thien Son Pagoda. 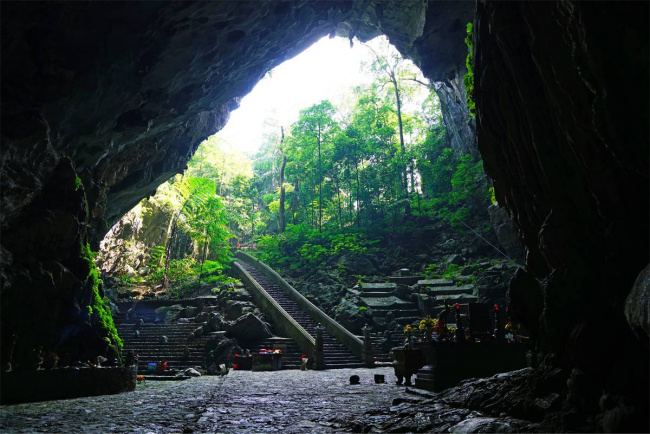 The Huong-Tich Cave at the top is beautifully situated. The entrance to the huge and mysterious perfume pagoda and Huong Tich cave resembles that of an open dragon’s mouth and is decorated with ancient Chinese letters. In this dripstone cave lies the Chua Huong Tich or Perfume Pagoda. Construction started in 1575. In the sanctuary are statues of bodhisattva Avalokiteshvara and his female counterpart Quan Am, the goddess of mercy. The bronze statue of the goddess placed in the temple in 1767 was looted shortly later by the Tay-Son rebels and melted down into weapons. The stone statue that stands today dates from 1793. 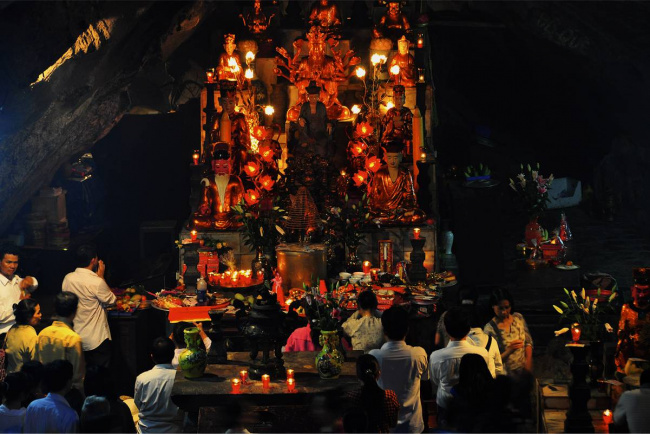 Most travelers who visit the pagoda do so by organized tour. Reaching the pagoda independently is difficult (unless you rent a motorbike in Hanoi) and probably not worth it. There are both private and group tours, including transport, guide, lunch, boat ride and access to the pagodas (cable car is often extra – about 70,000 VDN each way).

If you are interested in taking a boat trip over the Yen stream and visit the temples at the Perfume Pagoda, then you could take this one day Perfume Pagoda tour from Hanoi. You can go by small group or private tour.

The best time to visit Perfume Pagoda is from October to December. It is less touristy and quieter. It’s a lovely for a slow pace rowing on the river to enjoy the amazing scenery with beautiful water lilies blooming all over.

As one of the most important religious sites in Buddhist Vietnam, every spring after the Vietnamese New Year, thousands of Vietnamese pilgrims come here to pray for all the happiness and prosperity. This stream of pilgrims culminates at the Perfume Pagoda Festival. The festival starts on the 15th day of the 1st lunar month of the lunar month and leads to heavy crowds until mid-March.