The Pink Church in Ho Chi Minh City is actually called Tan Dinh Church and is located near the city center in District 3. In addition to its remarkable color, it is one of the city’s oldest and most important Roman Catholic institutions.

The history of Tan Dinh Church dates back to 1874, when a Catholic mission was established here under Father Donatien Eveillard (1835-1883). It was Eveillard who oversaw the construction of the first church, which cost 15,000 piastres (38,000 francs) and was built in December 1876. In 1877, he invited the sisters of Saint-Paul de Chartres to establish an orphanage and boarding school next to the church, which housed more than 300 young people in three years. Subsequently, a publishing house was added to the cathedral grounds, where underprivileged children were trained for the publishing house. To honor his contributions to the local community, he was buried in Tan Dinh Church after his death in 1883. 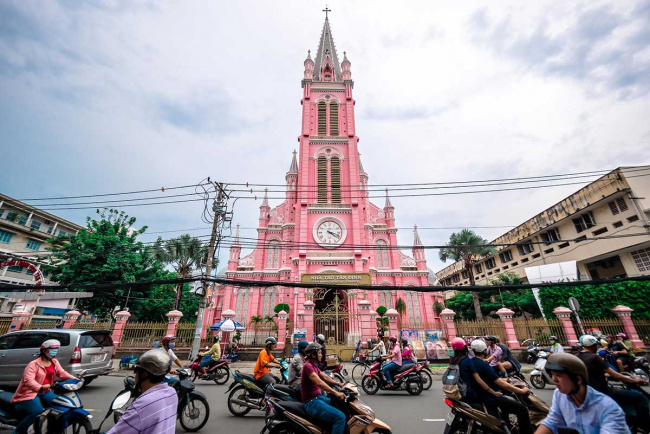 Although the cathedral underwent many periods of restoration and repair, its architecture and construction still remain in its origins. From the front you can see in the middle a high tower with an octagonal roof and a 3 meter high bronze cross on top. In addition, there are five large bells in the tower that weigh 5.5 tons. Other features include 2 other small towers and fine structures in front of the cathedral.

Next to the church is a small garden with a large Jezus statue opening his arms to welcome people. There are also other statues in the garden telling stories of the bible events. If you continue walking through the end of the garden you will see the gate to the clinic of the church. 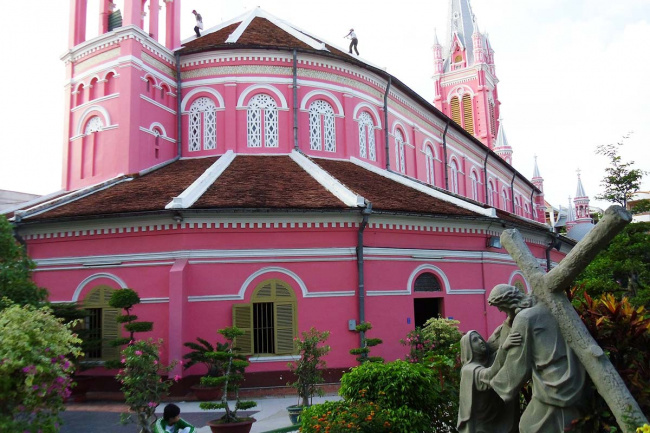 Like the outside, the church also has pink features on the inside. The large pink pillars in the center of the church are one of the highlights of the Pink Church’s architecture. The path along the rows of benches leads to the main altar. To the left are statues of Jesus and Virgin Mary and to the right of St. Theresa, all from 1890. Close to the entrance of Tan Dinh Church are two chapels, with most of it built in Italy and donated during a revenotion in 1929. 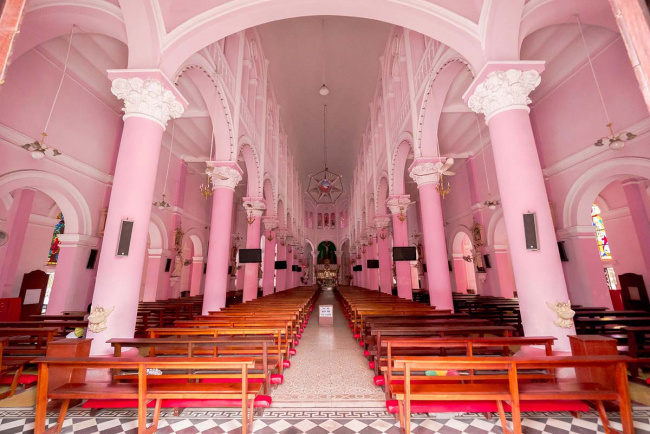 If you want, you can also visit the church during a mass. There are 4 masses a day during the week and on Sundays, when more people are free in the city, there are 7.

There is no strict dress code, but advisable to dress respectfully, including covering your knees and shoulders.

It can get quite busy in the church around the holidays. Especially around Christmas in Vietnam. It can also get very busy around Vietnamese New Year (TET) and the church is also beautifully decorated with flowers and lights.

Since it is the pink church just outside the center, you may want to combine this with other nearby attractions. 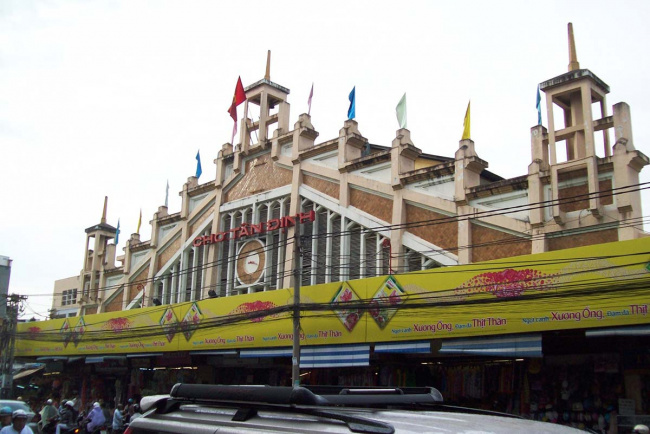 The Tan Dinh market is less than 150 meters from the church, across the street. If you really want to get in touch with Vietnamese culture and mingle with the locals, you can visit Tan Dinh – one of the oldest markets in the city. Built by the French colonial government in 1926, Tan Dinh Market serves as one of the city’s historic landmarks, as well as a well-known shopping location for locals.

Because few tourists come here, you will not find any souvenirs here, unlike the famous Ben Thanh Market. It is a place used by the locals. You will find a lot of clothing and fabrics on this market, but also plenty of food.

The South Vietnamese Women’s Museum shows how brave women were during the famous Vietnam War, their daily lives, religious beliefs and the Ao dai – the traditional dress.

The War Remnants Museum is a little further, between the center and the pink church. It is the most famous museum in Ho Chi Minh City and is about the Vietnam War and the colonial era. Here you will find shocking photos and impressive war materials and vehicles that have been left behind, such as tanks and helicopters.