Sam Mountain or Nui Sam (Mountain of the King Crab) is a prominent Buddhist pilgrimage site, 6 km southwest of Chau Doc in An Giang province. The mountain owes its fame to the presence of a statue of the holy lady Chua Xu and attracts Vietnamese from far and wide. The main shrines on and around the mountain are Tay-An Pagoda, the Temple of Chua Xu, the Tomb of Thoai Ngoc Hau, and the Hanging Pagoda. 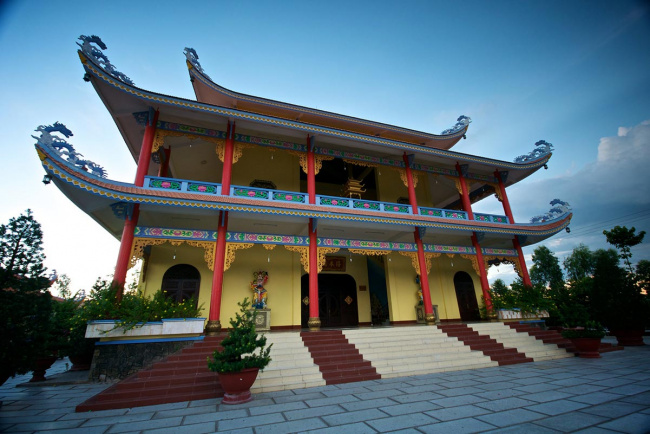 The first temple on the left side of the road from Chau Doc is Chua Tay An, built in 1847 and restored in 1958. The pagoda has a round tower with a Buddha statue in it. On either side of the stairs to the temple is a stone elephant: on the left a black one with two tusks and on the right a white one with six tusks.

The pagoda has a special interior. More than 200 wooden statues of saints, demons, many-armed goddesses and fierce generals and a pot-bellied Buddha make the whole thing a kind of religious Disneyland. The tombs to the left of the pagoda belong to famous deceased monks.

2. The Temple of Lady Chua Xu 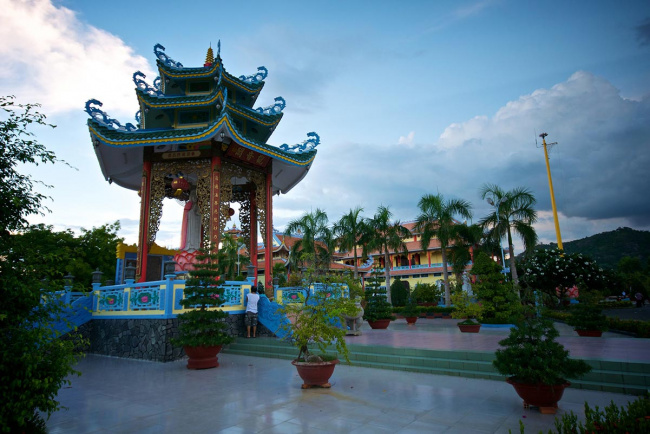 Diagonally opposite the Tay-Anpagoda is the Ba Chua Xu, built in 1821. Legend has it that a statue of the holy lady once stood on top of Sam Mountain. In the early 1800s, invading Cambodian troops tried to take it back to their homeland. During transport, the statue became heavier and heavier and eventually the Cambodians had to leave it on the slope. One day, Chua Xu appeared to the local people. She ordered the statue to be brought down. The villagers brought the statue to the foot of the mountain and erected a temple to the holy lady here.

Originally the temple was made of bamboo and had a roof of palm leaves. During the restoration of 1972, the sanctuary got its present appearance. The granite statue of Chua Xu stands in a niche and is wrapped in precious robes donated by believers.

During the fourth lunar month, in March or April, there is a festival in honor of Chua Xu. People then perform dragon dances, light fireworks and offer sacrifices such as suckling pigs, fruit and fake money. Also, the statue of the goddess is put in new clothes.

This not very interesting tomb is located diagonally opposite the temple of Chua Xu. Thoai Ngoc Hau was a senior mandarin in the court of Emperor Minh Mang. In the year he died (1829) he had this tomb erected for himself and his two wives. The tomb stands in the center of the rear platform, surrounded by the graves of minor officials. 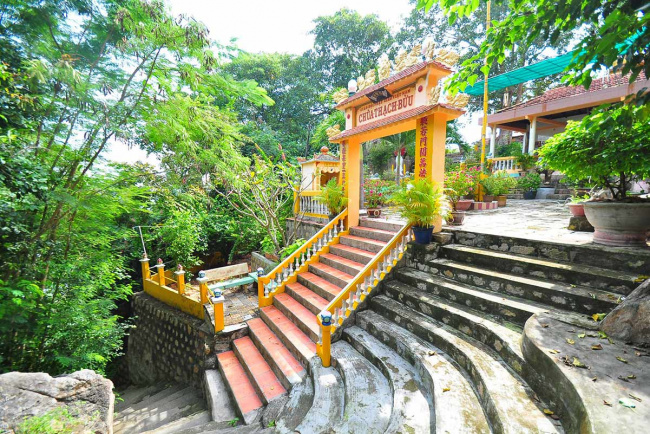 The Chua Phuc Dien Tu or Hanging Pagoda is located halfway up the slope of Sam Mountain. On the lowest level are the hexagonal tombs of a deceased abbot and its female founder, Le Thi Tho. The higher main shrine has some Buddha statues. On the back of the altar is an image of the founder. Behind the main shrine is a cave (hang) with an altar to Quan Am, the goddess of justice. From the cave a path leads up to a plateau with magnificent views over the rice fields, with Cambodia in the background.

5. The view and area

Climbing Sam Mountain earns believers the necessary religious credit. Those who are satisfied with a little less can ride up on the back of a motorcycle and complete the descent on foot. At the top is a small amusement park with fairground rides, food and drink stalls.

The view from the top is one of the highlights of Sam Mountain, with a panoramic view of the otherwise flat Mekong Delta, with the endless rice fields of An Giang. On clear days you can even look out over Cambodia.

At the top there is also a small military outpost, dating back to the Vietnam War with the Khmer Rouge. The post is still manned and although most military personnel are used to the tourists taking pictures, it is best to ask permission first.

Sam Mountain is located in An Giang, very remote from the rest of the Mekong Delta, so there are no direct connections from other corners of the country. However, the city of Chau Doc is only 6 kilometers away, from where it is best to take a taxi, rent a private car with driver or rent a motorbike so that you can drive there yourself.

Chau Doc has bus connections to major cities such as Ho Chi Minh City and Can Tho.

Things to do in the area of Sam Mountain

Because Sam Mountain is very remote, you’ll probably want to combine it with other sights to make it more worth your trip. About 20 kilometers from Sam Mountain you will find the Tra Su Forest. A boat trip through this submerged forest feels like a fairytale and you can spot rare birds along the way. From here you can continue your way further south towards Ta Pa, where you can see the most beautiful rice fields of the Mekong Delta. There is also plenty things to do in Chau Doc.

Check out a list of all the things to do in An Giang here.