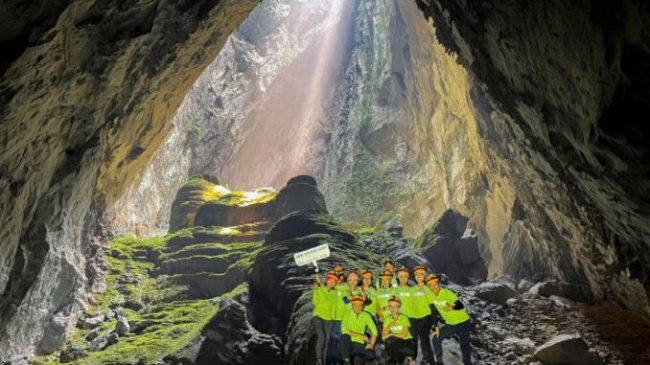 Along with famous landmarks, Son Doong cave was listed by the British travel newspaper The Travel in the list of 10 unique destinations on earth that have not been fully explored even though humans have set foot in it for a long time. .

From remote jungles and deserts to hidden caves and deep sea trenches, these awe-inspiring sights have yet to be fully explored by humans due to many factors related to geography, technology . …

The world ‘s largest rainforest is home to more than 10 million species of plants and animals, many of which have yet to be discovered by science. This vast land is so vast that many human beings have not yet set foot on it.

Amazon covers 9 countries, making it difficult to navigate and explore certain regions. In addition, much of the Amazon remains inaccessible due to its remote location, further adding to the mystery of this unique environment.

Stretching across the northern tip of Africa, this vast desert has always challenged humans as one of the most inaccessible places on earth due to its barren landscape and extreme heat. . The Sahara is also home to many rare plant and animal species, such as the Sahara leopard.

Located in the western Pacific Ocean , this is the deepest part of the ocean. Due to its incredible depth (in some places nearly 11 km), only a few expeditions have reached this mysterious place.

The pressure at the bottom of the trench is extreme, but it’s a place where people can discover more strange things about our planet. The Mariana Trench is home to a wide variety of deep-sea creatures, many of which have yet to be discovered.

Located in southern Africa, Namib is vast and is one of the oldest-formed deserts on earth. Namib’s unique conditions, combined with its remote location, make the desert an ideal place for scientists to search for new species. Fossils of dinosaurs have also been unearthed in the Namib Desert.

This huge waterfall is located in the heart of the Amazon rainforest and has a height of up to 226m – 5 times higher than Niagara Falls. Kaieteur Falls is home to many endangered species, such as giant river otters and harpy eagles. There are also a number of mysterious caves in the area that have yet to be fully explored.

This dark and mysterious area is inhabited by a variety of animals, plants and backgrounds that have remained largely untouched by modern civilization.

With dense forests and many unexplored rivers, the Congo Basin offers man the opportunity to explore the unknown. Congo is home to many endangered species, such as western lowland gibbons and forest elephants. The area also holds many secrets, such as the mysterious Lake Tele, rumored to be filled with bizarre creatures.

Located in South America and considered the driest desert on earth due to lack of rain and extreme temperatures. The Atacama remains unexplored mainly because the environment is too much for humans to bear.

This desert is home to some of the most unique species in the world, from tiny mosses that can survive without water for hundreds of years to bacteria that live in extreme heat.

It is home to some of the most extreme climates on the planet, making exploration extremely difficult. Although it has been visited by scientists for centuries, some areas of Antarctica are still unknown.

Many species have adapted to survive in the terrible environment of Antarctica, and scientists are constantly searching for new species of animals and plants that have evolved in that condition.

Located in the Pacific Ocean, the Aleutian Islands remain largely unexplored due to their remote location and rugged terrain. With rugged coastlines and mysterious caves, these islands are home to rare birds and marine mammals.

It is also believed that the islands contain many undiscovered ancient ruins, including lost treasures.

Located in Quang Binh , Central Vietnam. Son Doong is a huge system of underground caves, many of which have yet to be fully explored.

With winding passages and an eerie underground lake, this cave is a fascinating place for adventurers and visitors alike. Son Doong Cave is also home to many species of bats, monkeys and even schools of small fish.

These creatures have adapted to the unique environment of the cave and can provide scientists with invaluable insight into the evolution of species.

Từ khoá: Son Doong is one of 10 beautiful landscapes on earth that have not been fully explored