Around 60 km from Hoi An lies Tam Hai island, a barely visited tropical paradise. You find here a couple of small fishing villages, long beaches with coconut palms, steep cliffs, Cham ruins and a whale graveyard. It is real off the beaten track island, home to some local fisherman.

What to do on Tam Hai island

The island is very small, 6 km long and 4 km wide, but there is enough to do to spend there a day or two.

You can swim at the beaches of Tam Hai Island and in the river. Unfortunately, some of the beaches are quite polluted with lots of trash. You can go swimming in front of Le Domaine Resort and at Ban Than for cleaner areas. Some trashy beaches could be potential paradise beaches, with soft sand and coconut palm trees, but for now it is best to avoid them. 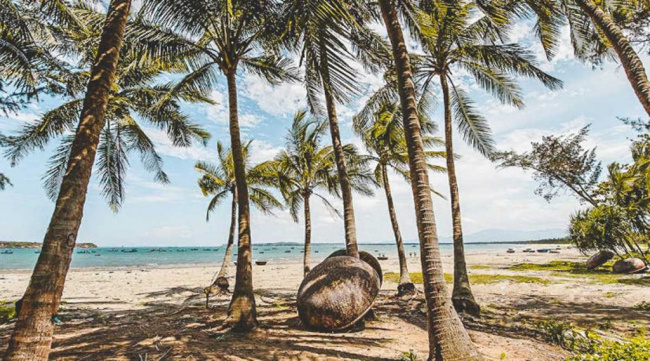 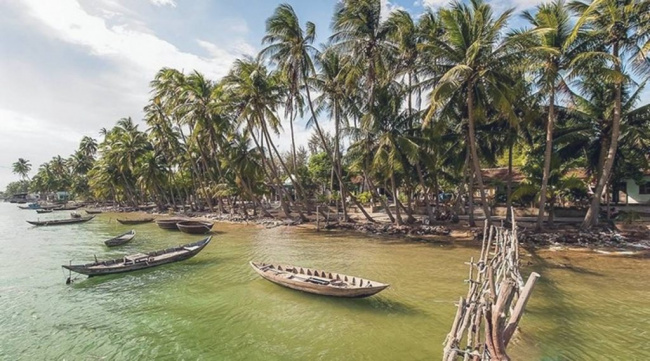 The sea itself is a lot cleaner and the water is very clear, so it is a good place for snorkelling. You can find plenty of corals and fish.

The island is just a few kilometer wide and relative flat, so a great place to explore by bicycle. You can rent bikes directly at the pier from the cafés or at the Le Domaine Resort. The island has just 2 main small concrete roads, so it is easy to get around and not get lost. Biking over the road brings you through small villages, beaches, shrines and shrimp farms. 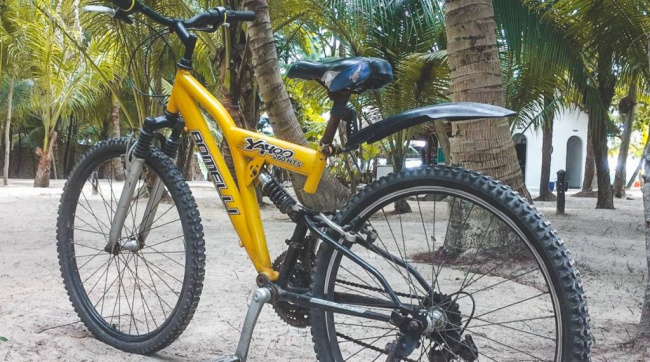 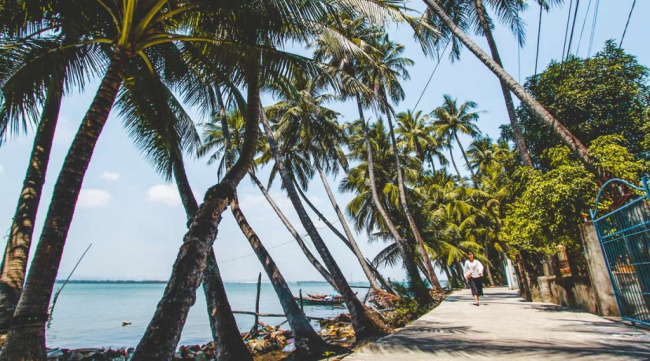 Another way to get around Tam Hai Island is by walking, because the distances are all very short and almost no traffic. You can walk over the concrete roads but it is also possible to walk around big parts of the island, using the beaches and dirt paths.

You can rent kayaks at Le Domaine Resort. It is a great way to explore some beaches, lagoon and mangrove forest. The river is calm, but once it flows into the ocean, the waves can make things harder. 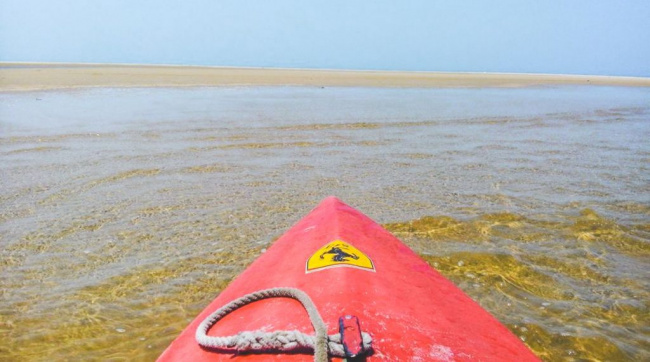 Northeast of Tam Hai island are two smaller islands called Da Island and Da Chim island that you can visit by boat trip. Boat trips can be arranges at the seafood restaurants on the northeast beaches of the island for a few dollar.

What to see on Tam Hai island

The main village on the island is Tam Hai. Here you find a couple of simple stores and seafood restaurants. In the north there is a small mural village, where some of the houses and shops are painted in scenes related to fishing and ocean life in bright colours. Other villages are typical Vietnamese fishing villages were you can get a very authentic feeling when you walk through them. In front of the villages are often shrimp farms and fishing boats. 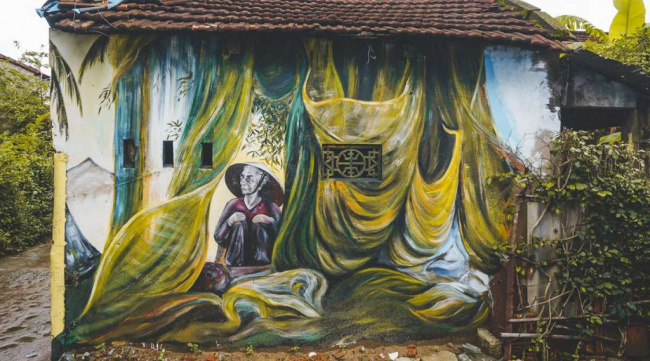 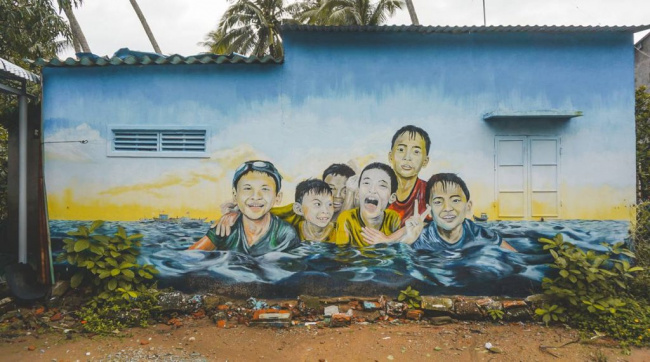 Between Ban Than and Tam Hai village there is a ancient Cham well and temple ruin, hidden between the jungle of coconut trees. This fresh well is still being used and is seen as holly place with the purest water on the island. Some of the locals use it to make rice wine and think it can cure seasickness.

Ban Than has a very nice volcanic cliff. This 40 meter high cliff is completely black. In the water below the cliff there is a nice spot for snorkelling when the ocean is calm, mostly in the months from April to August.

There are some very nice beaches around the island, unfortunate, trash is a big problem on the island. Swimming is a good option, as the water is fine.

There a are a few small temples and shrines all around the island and one of them is the newly-built whale graveyard where dozens of sea mammals are berried. They believe that this will bring them good luck when they go out on the ocean for fishing. You can find the whale grave site at around 2 km from the main village.

Tam Hai island lies in Central Vietnam, situated in Quảng Nam province, the same province as Hoi An. (location of the island)

From Hoi An and Da Nang

Driving from Hoi An: Take the Cua Dai bridge to the south and swing down any small road leading out of the main highway. Keep the coast om your left, you will eventually pass through Tam Thanh village. Continue hugging the beach and 20km then you will reach the top of the peninsula and the ferry to Tam Hai.

There is a small airport in the south and very close to the island, calles Chu Lai Airport. The airport has daily flights from Ho Chi Minh City and Hanoi. From the airport it is just 8 km to the ferry crossing at Ky Ha Port. The ferry can fit a few cars and motorbikes and takes just 5 minutes to bring you the the island. The ferry crossing cost 5,000d walking and 10,000d for bikes.

You can go to Tam Hai Island at any time during the year and it will be beautiful but according to Tam Hai Island tourism, the best time to get here is during the summer months from May to August. You should avoid the last months of the year because it is often a stormy season so going to the island can be dangerous or difficult to go to or to get off. 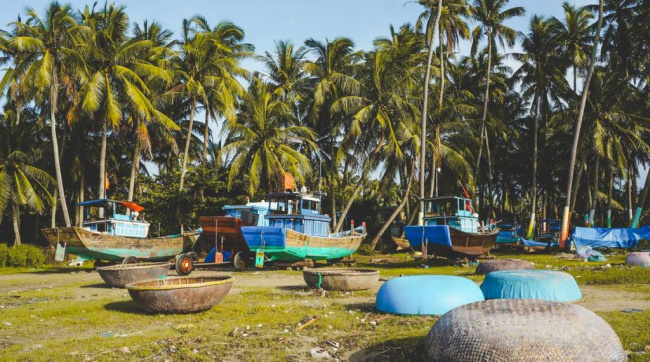 Old island traditions are maintained on Tam Hai, that are mainly focused on life on sea. Every year at 20 January there is whale festival and in March a full moon festival to respect the fisherman that where lost at sea. The villagers built small replicas of their fishing boats including mannequins of the deceased. that are being released on the sea with candles for guiding.

Domaine de Tam Hai Resort is the only accommodation on Tam Hai island. There are 11 bungalows next to the river. There is also a pool, a bar with pool table and some games. These 11 “villas” are beautifully and stylishly furnished. All rooms have a double bed with mosquito net above it. There is a television with home cinema set. There is air conditioning and there are 2 fans. The sleeping area also has a living area with a bench and coffee table. The bathroom is half open and has a regular shower and a rain shower. You can rent bikes and kayaks at the resort. 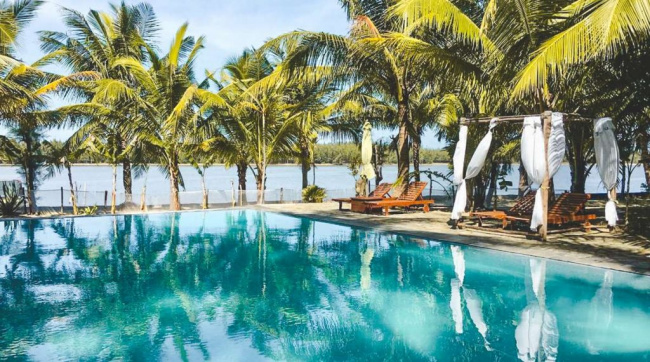 You can also go camping on the island, provided that you bring your own camping gear with you. Another alternative is staying at the beach of Tam Thanh Village. There are several accommodations there, including some guesthouses and a resort. Besides that, you can visit the mural village too.

If you stay at the Domaine de Tam Hai Resort, you most likely eat over there too. The menu is good and you can enjoy some nice cocktails during sunset at happy hour (5:00 PM to 7:00 PM). There are a few restaurants on the island, but the choice is limited, with mostly seafood restaurants and some noodle places. Keep in mind that from 12:30 PM till 1:30 PM a lot of places are closed, including the cafes and restaurants.

The coconuts on the island are very cheap and a couple of them is enough water for the whole day.

There are no big shops on the island, so it is wise to bring some essentials with you.