The Temple of Literature is often cited as one of Hanoi’s most picturesque tourist attractions. Originally built as a university in 1070 dedicated to Confucius, scholars and sages, the building is extremely well preserved and is an excellent example of traditional Vietnamese architecture.

Short history about the Temple of Literature

The temple was founded in 1070 by Emperor Ly Thanh Tong in honor of Confucius and is dedicated to science and literature – things that are highly regarded in Vietnam to this day.

Six years after its founding, the temple housed the Quoc Tu Giam (School for the Flower of the Nation). This first university in the country taught sons of the nobility Confucian values ​​and trained them to become civil servants. Exceptionally, the school also admitted outstanding children from the common people. National examinations were held here every three years between 1443 and 1778, entitling them to join the administrative apparatus. Emperor Gia Long moved the training institute to the new capital Hue in 1802.

Although the temple has been restored several times, the old design has remained largely intact. The Temple of Literature is one of the best examples of traditional Vietnamese architecture.

Highlights of the Temple of Literature

The entrance is on Quoc Tu Giam Street. The main gate, Van Mieu Mon, gives access to the 2.5 ha site. The complex consists of five courtyards, separated from each other by walls. 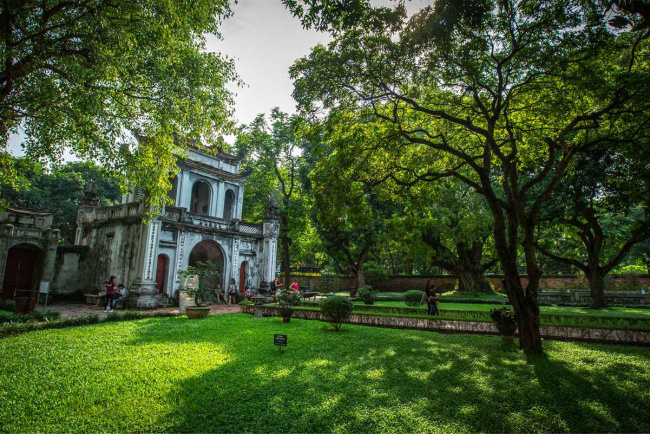 The first two courts have no buildings. In the first courtyard you will find the entrance to the Temple of Literature and it leads to The Great Middle Gate with two smaller entrances on both sides. There are two small ponds on each side of the garden and 3 paths; the middle one for the king and his royal family and the two smaller paths on the side for the students and normal people. 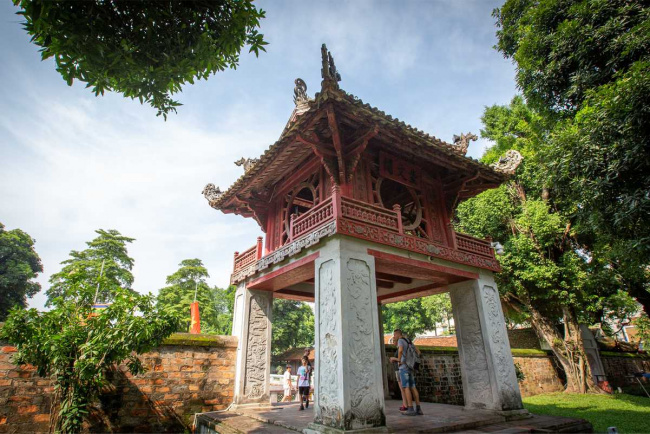 Above the gate between the second and third courtyards is the beautiful, wooden Khue Van Cac (Pavilion of the Seven Stones). In this pavilion, scholars recited poems and read literature. The picturesque structure attracts photographers and drafters. The pavilion is a national symbol, used on the back of a 100,000 Vietnamese Dong banknote. 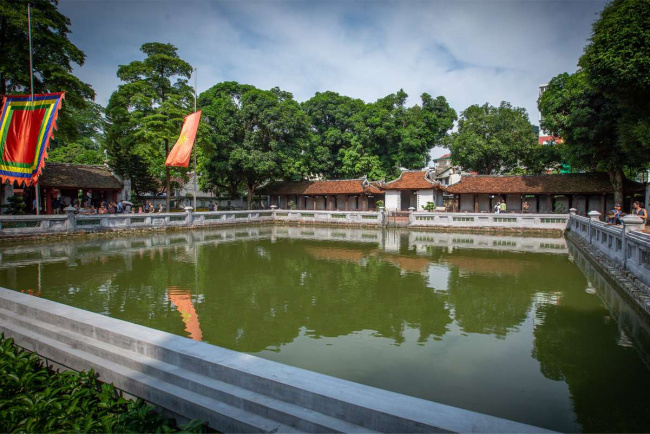 The third courtyard has a pond in the center, the Thien Quang Tinh (Source of the Heavenly Light). The pond represents a mirror absorbing the best essence of the universe and helped the students to see themselves and dress up before entering the sacred inner part.

On either side of the garden are 41 stelae on the back of a stone turtle. They are memorials in honor of those who passed the national exams. The 82 stelae contain the names, places of birth and merits of 1,306 PhD graduates. Emperor Le Thanh Tong began erecting these memorial stones in 1484, striving to raise the profile of the scholarly class. 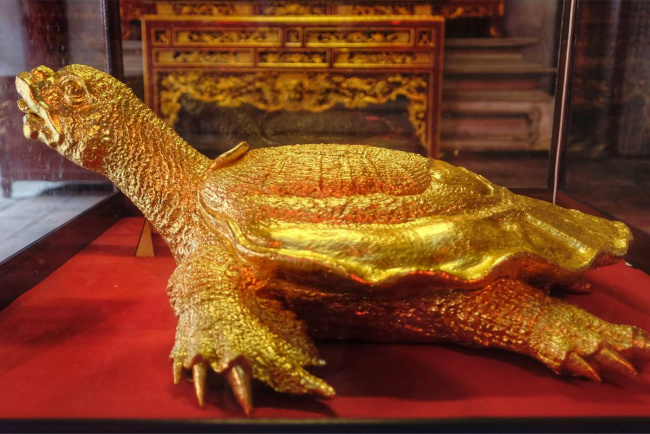 It used to be lucky for students to rub the turtles’ heads before their exams, but in order to preserve the turtles, students (and anyone else) are forbidden to touch them these days. 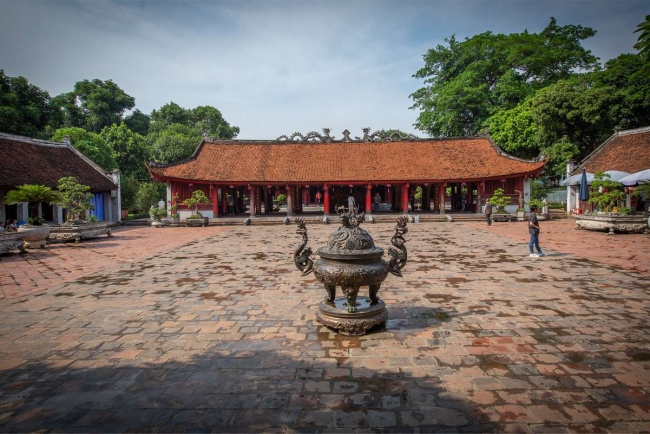 In the fourth courtyard is the main Temple of Literature with a statue of Confucius and his four most devoted disciples. This area is still used by students to make their offer, mainly during exam periodes.

In the last courtyard there use to be the library and academy, but it has been destroyed. It was originaly built in 1076 with the main goal of teaching the country’s high officials. But during the First Indochina War in 1946, it was destroyed. In 2000 the govement built a reconstruction of the Imperial Academy, that is now used as an exhibition where you can see the old uniforms of the scholars use to wear among other things.

Chua Van Mieu or Temple of Literature is located on the north side of Dong Da district, 1 km south of Ho Chi Minh Mausoleum.

The Temple of Literature is about 2 km from the Old Quarter. You can either take a taxi or traditional cyclo ride to get here, any driver in Hanoi knows the place. You can also walk from the Old Quarter. On the way you will pass Hanoi train street, where a still used stretch of train track runs right through a residential area.

Since the Temple of Literature is a formal historical site and a temple, you must pay serious attention to the dress code and rules to be respectable.

Visit the temple by local tour

A visit to the temple is also included in Local Vietnam’s Hanoi city tour. Besides this temple, you will visit the Ho Chi Minh Mausoleum and Stilt House, Museum of Ethnology, Ngoc Son Temple and One Pillar Pagoda. You finish the tour with a traditional and fun cyclo ride through the small streets of Hanoi Old Quarter.

Other sights around the Temple of Literature

The Temple of Literature is about 2 km from the center of the Old Quarter. There are a few big attractions close to the temple, within 1 km walking (around 15 min). The closest one if the Imperial Citadel of Thang Long. The entrance is close to a huge statue of Lenin and the Vietnam Military History Museum. This UNESCO World Heritage complex served as the capital of Vietnam and has several old palaces, ancients roads, ponds and wells you can visit.

A bit more north is Ba Dinh Square. The square itself huge, but the actual highlights can be found around it. The most exceptional is the Ho Chi Minh Mausoleum, the resting place of the former president and Vietnam’s greatest leader, Ho Chi Minh. The other attractions around the square are also related to this man. You will find Ho Chi Minh museum, dedicated to his complete life and his former stilt house next to a pond. Between the mausoleum and the museum you will find one of the most important temples in Hanoi, the One Pillar Pagoda.