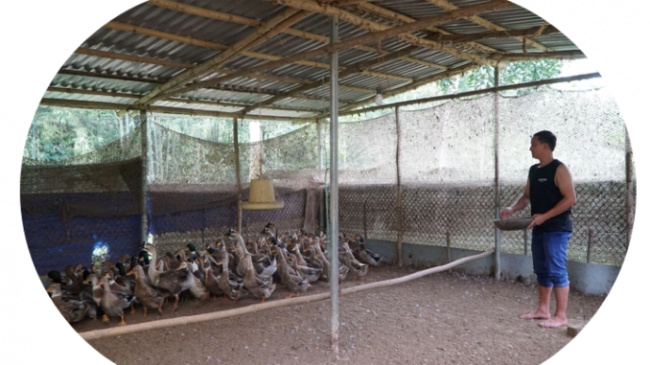 Thai ethnic boy in Thanh Hoa escaped poverty with a famous duck breed in his hometown, and at the same time helped many households in the village do business.

About Co Lung commune, Ba Thuoc district, Thanh Hoa province, everyone knows about Luc Van Nam (born 1986, in Khun village). He is one of the good examples of young people doing business here.

More than 10 years ago, Luc Van Nam, a typical young man in the poor countryside of Co Lung commune, was sent to study vocational training to change the face of the local economy. “In those days in my hometown, the percentage of going to universities and colleges was only counted on my fingers. I was fortunate to be trusted by the locality and introduced me to a vocational college under the support project from the 30a program. by the Government, giving priority to areas with special difficulties”, Mr. Nam shared.

Thanks to raising Co Lung ducks in the stream, Mr. Nam has successfully started a business (Photo: Thanh Tung).

According to Mr. Nam, in 2012, after graduating from Thanh Hoa College of Agriculture and Forestry, he returned to his hometown to find direction for economic development. With the knowledge he learned at school, he realized that there was a famous Co Lung duck breed in the place where he lived, so he decided to start a business with this duck breeding model.

By 2014, he had borrowed 30 million VND from the social policy bank and 10 million VND from his parents to start a business. With capital, Nam went around the village to collect 50 purebred ducks for breeding and then went to the bank of Khanh stream, next to the house, set up a tent, and netted the first batch of ducks. (1$=25,000 VND)

In the early days, seeing Mr. Nam set up a shack by the stream to look after the ducks, many people were surprised. However, Nam’s first batch of ducks grew quickly and laid eggs regularly.

“Co Lung Duck when young is very strong, this is a duck that likes nature, so it is necessary to create the most favorable conditions to develop instinctively. Near the house there is Khanh stream, so I took the ducks out there to graze accordingly. “, said Nam.

In just a short time, from 50 ducklings, young man Luc Van Nam has bred into a duck farm with hundreds of ducks. Mr. Nam said that in 2016 he started to market the first batch of ducks. The products he sells to the market are mainly commercial duck eggs and ducks.

However, due to the lack of access to the market, the first time income is about 20 million VND.

By 2018, when Thac Hieu tourism and Pu Luong community eco-tourism area developed, many tourists came to visit, many restaurants began to spring up, Mr. Nam took advantage of the opportunity to “market” duck products. Co Lung and achieved success beyond expectations.

Not only doing a good business, Mr. Nam also helps many people in the duck farming village thanks to the linkage model (Photo: Thanh Tung).

“It was a breakthrough for me, thanks to the association of supplying commercial ducks with resorts and restaurants, I was able to get out of a difficult situation,” he confided.

Currently, Mr. Nam owns more than 1,000 ducks. On average, each year he earns about 70-90 million VND from raising ducks.

Successful with the Co Lung duck breed, in August 2021, Mr. Luc Van Nam boldly invested in raising 3B cows, bringing in an annual income of nearly 100 million VND. From a poor household, having to borrow money to do business, his family has successfully escaped poverty.

Help the villagers get out of poverty together

To expand the scale, Mr. Nam is linking duck farming with 18 households in the commune. Nam’s main linking method is to sell seed to relatives, after 3 months, he will receive and buy all of his ducks to sell to the market.

Each month, he consumes about 1,500 commercial ducks for villagers. “I am the person who was sent to study with the purpose of returning to the locality to help the villagers and help the local economic development. This association partly helps people in the locality to have jobs and a clear source of income. clearly,” said Nam.

Mr. Nam has applied the knowledge he has learned into practice (Photo: Thanh Tung).

“I am aiming to expand the 3B cow farming model. This is a cow breed that is very suitable for available local conditions. My hometown has a lot of grassland, which can be used as a source of food to raise cows. without spending too much money,” Nam shared his plan.

Mr. Nam said he would expand the scale of raising 3B cows (Photo: Thanh Tung).

Ms. Ha Thi Nga – Chairwoman of the Farmers’ Association of Co Lung Commune said that Mr. Luc Van Nam is an example of young people doing good business in the locality. Thanks to the duck farming model, he escaped poverty. In addition, Mr. Nam also helps people in the village to develop their economy from duck farming.

“The members of the Farmers’ Union in Co Lung commune using loans from policy banks in the past have escaped poverty, all members use the loan for the right purpose. The loan is as a livelihood for people. For Mr. Nam, this is a typical model, we are very pleased when he promotes and uses loan capital effectively,” added Ms. Nga.