QUANG BINH – Twice started a business, when it was almost time to “pick the fruit”, the storm “blows away” hundreds of millions of dong, but Nguyen Van Nhi persisted to revive his career in his hometown.

One day at the end of 2020, when Typhoon Vamco hit Quang Binh, Nhi immediately drove to the chicken farm more than ten kilometers away from home, anchoring the barn. “Fortunately, this farm is high, the water has not flooded yet. It’s low over there, the chickens are dead,” Nhi told the worker, shaking hands and pointing to the low-lying area, where more than a dozen households are raising chickens in association with their company. .

That storm caused more than ten thousand chickens to leave the cage to drown. This is the second time the 29-year-old man in Quang Thach commune, Quang Trach district has been “broken by heaven”, the money is about to return to his pocket and drifted away with the flood water. 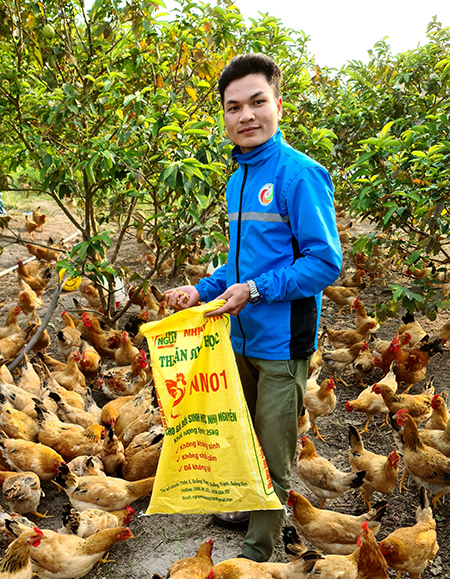 After finishing 9th grade, his family had a difficult time, so Nguyen Van Nhi quit school and worked as a hired hand for a pepper garden owner. One day, the owner of the garden called him in and asked to give him a 6-month course on microbiology taught by a foreign expert, at the Hanoi Academy of Agriculture.

In August 2010, hiding from his family, Nhi took the car to Hanoi to go to school. In his pocket at that time, there were only a million in savings, not enough money for rent, had to ask the landlord to let him sleep under the stairs. He bought a box of instant noodles, put out exactly one package a day and then broke it in half, half at noon, half at night. Outside of school hours, Nhi applied to work as a security guard from 5 pm to 12 pm, earning 50,000 VND a day, sending it home to help his mother raise him. At the end of a 6-month course with a foreign expert, Nhi received the title of the best student with a $1,000 bonus.

Returning to his hometown, he was invited by an acquaintance in the class to be in charge of organic pepper farming techniques, paying 15 million a month, and staying at work. After more than three years of working as an employee, this guy has more than 400 million VND in hand. Having money, at the beginning of 2015, Nhi borrowed another 200 million VND from her friend, growing organic pepper by herself because “I like farming, I want to own it”. But the storm in 2017 wiped out the entire 10 hectares that are ready to be harvested. built-in three years of a young man. Inheritance and total capital of more than 600 million dong lost all, Nhi gave up eating and sleeping, wandering in the garden, a week lost 5 kg. That was the first time Nhi was “broken by heaven”.

The news that “the second guy went bankrupt” spread to his family in the countryside. Mrs. Cao Thi Lieng – Nhi’s mother – summoned her son to plan for her son to go to Korea to work abroad. Listening to her ears, Nhi “pocketed” 100 million dong as a mortgage on her family’s red book to Hanoi to study a language in the hope of going abroad to do business and have enough money to repay the debt.

During her stay in the capital, Nhi was accidentally invited to eat at a restaurant that served organic curry chicken. Curious with the name “organic chicken”, he groped to find out and was introduced to a boss specializing in food distribution. This person pledged that, if there is a supply, he will take 20 tons of chicken per month for more than 140,000 VND per kg, three times higher than the normal industrial chicken price. Immediately, Nhi had a question: “Why don’t you go back to your hometown to raise this type of chicken?”.

The next day, he took the car back to his hometown, lied to his mother that the company had a problem, so he could not go to Korea. Nhi took a pen and paper to the organic chicken farms to see how they set up the cages, curtains and disinfection. After a month, 40 million excess money after the labor export “shortage”, he invited two more friends to set up a company specializing in raising and supplying organic chicken.

In the first batch, Nhi imported 1,000 freshly peeled chickens from the Institute of Livestock Production, and released them on an area of ​​one hectare of rented land near her house to raise “naturally” chickens, not in captivity. Self-mixed feed from corn, rice, barley germ and fish protein. The first two litters of 2,000 chickens, healthy chickens gain weight evenly, each litter earns VND 50 million. In the third litter at the end of 2018, nearly a thousand chickens suddenly fell ill and “died like stubble”.

The chicken died, the owner scratched his head to find the cause and realized that “prevention is better than cure”. Once I happened to know “organic bio-feed” including corn, barley, soybean… combined with microbial technology to help chickens absorb nutrients and resist diseases well, Nhi is happy. However, this type of bran is mostly imported at a high price, so he hires a research room to mix and introduce microorganisms into food. 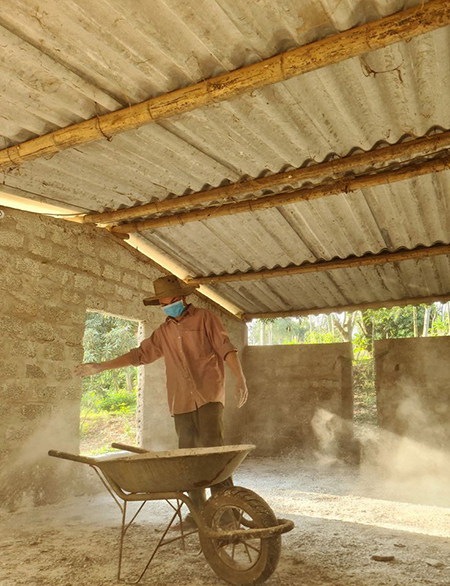 After three years of researching bran containing microorganisms, in early 2020 Nhi succeeded. This product has a shelf life of several months instead of a few days as before, and is cheaper than imported bran. The flock of 40,000 chickens, linked with 40 households in many provinces and cities, is provided with microbial bran produced by Nhi, each one is healthy and well absorbed.

“Nhi has just finished 9th grade, but agricultural engineers are not sure how to do it like him. It’s a young man who dares to think and dare to do things,” said teacher Tran Tu Luc, dean of the Economics Faculty of Quang Binh University, a friend of Nhi’s. .

At the end of 2020, despite the loss of ten thousand chickens due to the historic storm, the company still supplied more than 40 tons of chicken to the market, with a revenue of nearly 6 billion dong ($240,000). This year, Nhi was also one of 10 rural youths with excellent achievements in production and business to receive the Luong Dinh Cua Award and the Prime Minister’s Certificate of Merit.

The chickens “pull” Nhi to stay in his homeland, so even though he worked all night from production to research, he never complained of fatigue. “This young man, when he falls, will get up, correct his mistakes and do it again, not give up,” commented Phan Thi Hong Thuy, secretary of the Quang Trach Commune Youth Union.

Now looking at Nhi “engrossed” with the chickens, Mrs. Lieng no longer asks when her son will go to Korea again. As for this young man, the goal in 2021 is to redeem the red book for his mother, even though she repeatedly clicked her tongue “Let it do business”.

Từ khoá: The farmer was twice ‘broken by heaven’