SON LA – 12 years ago, when he saw an Australian orange bought at the supermarket with two remaining stems, Ha Van Chien came up with the idea of ​​​​cutting it and grafting it into a wild grapefruit.

The 33-year-old man that year did not expect this to change his life completely. It was a Navel orange imported from Australia that Chien bought a few times at the supermarket for his wife to foster while pregnant with the second child. He really wanted to propagate this orange for his home garden, but because it was a seedless fruit, he didn’t know how until the day he happened to see two still stemmed.

In the midst of the freezing rain of 2010, Chien covered his raincoat and went to the garden to find the roots of wild pomelos, carried them to the porch, and dried each tree trunk for grafting. “If the stem is moist, the sprouts will all rot,” he told his wife. Two orange stalks can be grafted into four seedlings, two of each type.

After exactly two years of care, four orange trees give 20 kg of fruit. “Eat sweet and delicious, just like oranges bought at the supermarket,” Hoa told her husband. They continued to propagate, turning the original four plants into 80 plants. Currently, the garden is 1,000 m2 wide, in addition to oranges, there are more than 300 Navel oranges (convex navel oranges). “Every year, the revenue from the orange garden is about 900 million VND (35,000 USD), two-thirds of the revenue is from selling Navel oranges,” Chien said. 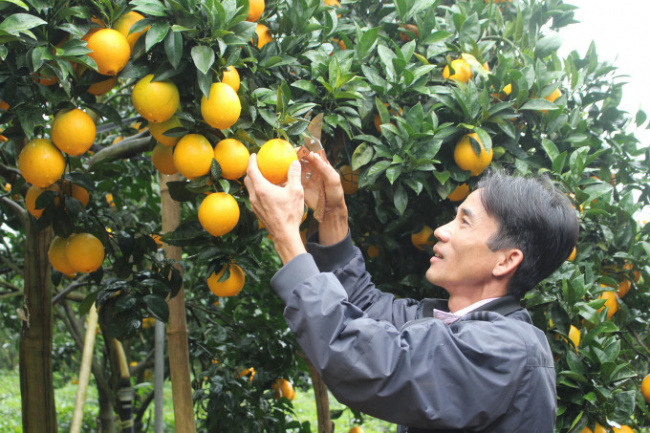 Chien harvests convex navel oranges in his garden, on the morning of November 23. Photo: Pham Nga

Thanks to the orange garden, the life of a hungry farmer all year round turned to a new page.

“My family has 5 brothers, and my parents are 7 servings of food, and I’m never full. Tapioca is cooked for pigs, and my family cooks it with a stir to share it with each other to slurp,” Chien recalls his childhood in his hometown. Nam Dinh.

In 1998, after a period of wandering in many provinces to earn a living, Mr. Chien went to Moc Chau to settle down. Childhood is associated with hungry days, so Chien always thinks that where there is a lot of land, corn, potatoes, and cassava can be grown and eaten. So when more people poured into the street, he went back up the hill. With four million dongs, he bought land of 1,000 m2, built a temporary shack, and then started farming.

In the first two years, his family did not believe in Chien because there was no telephone or correspondence at that time. The boy who had just finished 3rd grade went to pick tea for hire, hoe the land to grow corn, cassava, and raise chickens for a living. But the poor Northwest land does not have many jobs to hire. Many times, he did not have money to buy rice, so he broke young corn to eat temporarily. Neighbors selling groceries felt hurt, let Chien buy rice on credit, pay at the end of the month.

Hardly accumulated, in 2000, he built a house of only 20 m2 by himself, covered with 9 sheets of fibro cement, and then married the neighbor’s daughter who had just finished high school. Ms. Ngo Thi Hoa (19 years old at that time) came home with Her husband works as a gardener and sells tofu. Chien sets up a team of builders to work around the area. ”I used to be hungry, so I told my wife that if anyone sold land, I would borrow it to pay it back. If you have arable land, you will have a warm day,’ he said.

He and his wife work without a day off to accumulate finance. They often wake up before 2 am to sell beans, take care of plants, pick tea, go to build, dig wells for hire… After 7 years of making tofu, Mr. Chien finds it ineffective, and has no time to take care of the plants. in the garden should be peacock. At two o’clock in the morning, Hoa woke up, he knew but kept lying on the bed. Struggling alone, her sister-in-law was too tired to give up.

“He has a love for trees and gardens that are rare for farmers to have. Sometimes, 1-2 am still lurking in the garden looking at each tree with lights and catching worms,” ​​said Ngo Thanh Dao, director of cooperation. Tay Bac commune (Moc Chau) said.

But the price of oranges is not as expected, the yield depends a lot on the weather, so farmer Chien and his wife have not paid off the debt for more than 5 years to buy land to expand the garden. 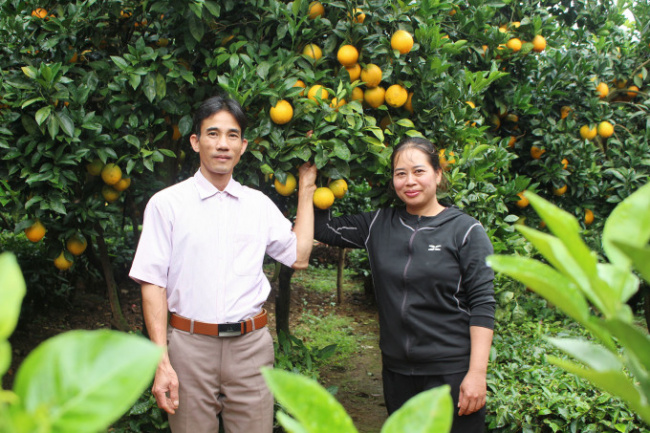 Chien and his wife in the garden of orange umbilicus, the morning of November 23. Photo: Pham Nga

The protruding navel orange eye grafted on the wild pomelo root in 2010 gave sweet fruit, sparking hope for Mr. Chien and his wife. But when replicated in the garden, it was damaged by fungi. Ripe fruit, no water.

“At that time I was stressed, almost every night I stayed up thinking about how to handle pathogens,” he said. Groping all the way, he and his wife finally found a specific treatment, combined with monitoring from the beginning, in which leaves were immediately cut off and burned to eliminate pathogens. When the umbilicus tree grows as expected, he propagates and sells thousands of trees to farmers in Moc Chau.

In October of this year, Chien and his wife cooperated with the Northwest cooperative to build a convex navel orange garden model for visitors to experience, harvest and enjoy at the garden. The farmer and his wife named their garden “Ly Orange Garden”, after their second daughter. He often opens conversations with visitors with this name, to tell about his love for his wife and children. , for soil and orange trees. 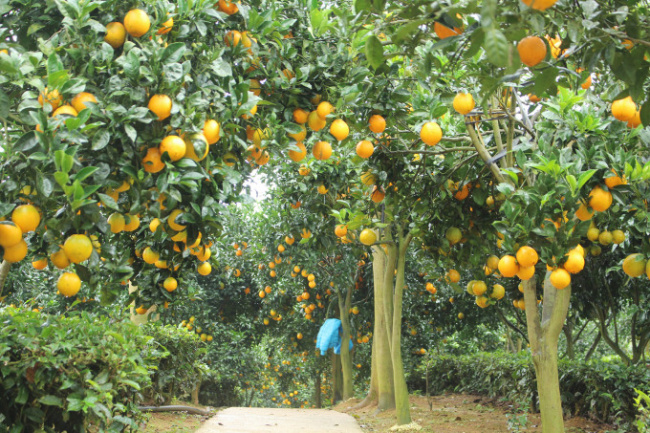 The way to the orange tree garden of Mr. Chien’s family, on the morning of November 23. Photo: Pham Nga

Mr. Le Anh (30 years old, from Hanoi) took his family to Moc Chau for the first time to experience and enjoy the convex navel orange variety in Mr. Chien’s garden. ”Oranges are thicker than Australian oranges bought at the supermarket, but they are equally sweet, fragrant and fresh. Enjoying the oranges that are only imported from abroad in the Vietnamese garden and listening to the garden owner tell me, I admire the farmer’s creativity,’ he commented.

In the past three years, on average, more than 300 umbilical umbilicus trees have harvested about 16 tons of fruit. In 2017, Mr. Chien was awarded a certificate of merit by the President of Son La province.

Mr. Luong Tien Quynh, Chairman of the Farmers’ Association of Moc Chau district, said that Mr. Chien was the first person in Son La province to successfully transplant and grow a convex navel orange. “Thanks to his hard work and creativity, Mr. Chien enriches his family and creates more opportunities for economic development for local farmers. This is orange with very high economic efficiency in his home district. now,” said Mr. Quynh.

After 24 years of working in the highlands, Chien and his wife built a spacious and cool house for themselves. Your children are best invested in going to school. Instead of running to eat every meal, he and his wife have a farming life many people dream of.

“As a farmer, it’s not enough to just sell your face to the land and your back to the sky. You have to constantly be creative, do differently, think differently, and then speak, then you can be successful,” Chien said. Orange branch laden with fruit said.

Từ khoá: The stem of the orange helps to change a farmer’s life