Thung Khe Pass is an impressive mountain pass in Mai Chau. You drive over this pass when you go to Mai Chau from Hanoi and head towards Moc Chau. Many people who driver over this pass don’t know the name. This pass may not be as majestic as Tram Ton Pass in Sapa and not as steep as Ma Pi Leng pass in Ha Giang province, but it is a very special ride.

Views from the Thung Khe pass

Thung Khe Pass is beautiful, but also very dangerous due to steep cliffs, rocks on the slopes and the many curves. It is also called White Rock Pass, because limestone slid down when the mountain pass was constructed, so that one part of the mountain pass is now completely white. 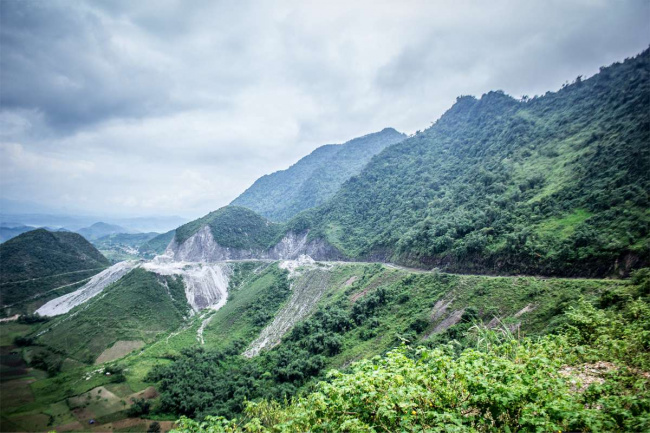 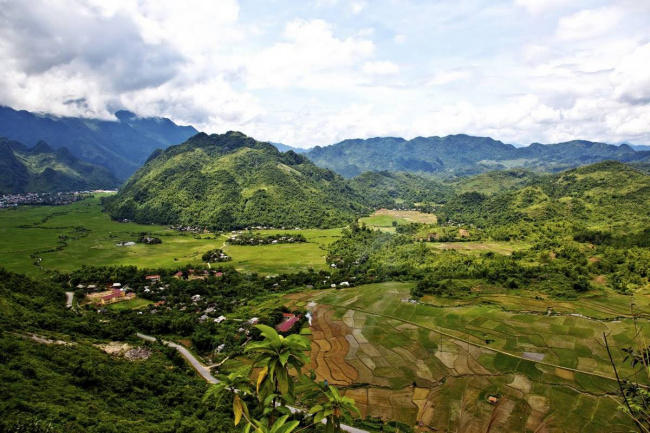 The view from Thung Khe pass

The part that is completely white is also close to the top of the mountain pass. You will find here a number of small restaurants and shops, with thatched roofs, a few tables, chairs and hot teapots ready for the guests who stop. These shops are close to the abyss and are also called the Thung Khe market. Buses from Hanoi often stop here for something to eat and enjoy the view. It can be very chill and when you are unlucky you are in the clouds so you don’t have a view. On the “market” you can buy food and things that come directly from the area.

Furthermore, the main reason for you to stop here is because of the scenic views. If you drive with a motorbike you can stop easier ad multiple places along the road, but for car or mini van there are not a lot of places to park you car to enjoy the view.

Thung Khe pass is also known for its striking weather changes during the day, which the locals compare it with the changing of seasons. The mornings are cool and hazy, the afternoon brings autumn wind but also the warmth of a clear summer sun and in the evening it gets cold and foggy like in the winter.

Getting to the Thung Khe pass

When you go with the local bus to Mai Chau from Hanoi, the bus often stops on the highest bus at the market, but only if the driver wants to eat something. Minibuses and private transport from Hanoi to Mai Chau often stop both at the highest point at the market and at the Mai Chau viewpoint (Thung Khe Pass flagpole). There are also tours going to the Thung Khe Pass from Hanoi and Mai Chau, you can check out the tours here.

Another option is to rent a scooter and drive there from Mai Chau by yourself. The viewpoint is only 10 km from Mai Chau and White Rock Pass, at the market, is 20 km from Mai Chau. Please keep in mind that driving over this winding mountain pass is not without dangers. This road is also used as the main road to cities such as Mai Chau and Moc Chau.

Other things around the pass

There is a waterfall in Mai Chau you can visit not too far from the pass, called the Go Lao waterfall. It is around 18 km from the top of the pass and just 6 km from where the road starts to go up. You can also drive a very nice loop, that is about 60 km. (Check out the loop on Google Maps). Starting from Mai Chau you head all the way up the pass, with on the way a stop at the Mai Chau viewpoint. Continue driving all the way over the pass until there is a road on your left side. Follow this road through beautiful countryside until you hit another highlight of the province, the gigantic Hoa Binh Lake. 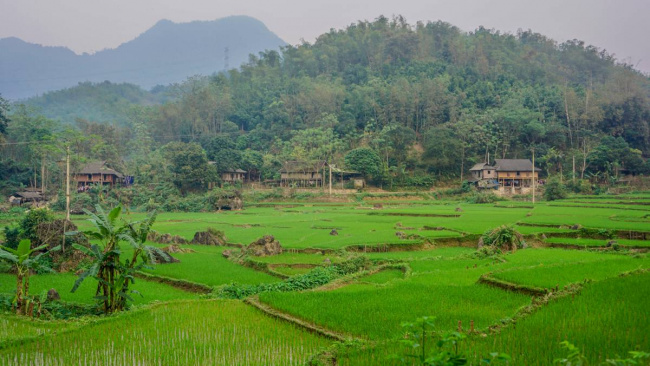 Follow the road along the lake, with some stunning viewpoints along the way. There is also an option to do a boat trip on the lake. Following this road you will see the Go Lao waterfall, you can’t miss it. Close to the waterfall there is an intersection. Here you take the road on your left to go back to the beginning of the road up to the Mai Chau viewpoint and Thung Khe pass. But instead you go straight to drive back to Mai Chau.