Phong Nha is one of the most impressive areas of Vietnam. The region is known for the many caves that you can find, including Hang Son Doong Cave, the largest cave in the world. But with so many caves that you can explore, you may wonder which one to visit. This of course depends on your travel time, budget and adventure level.

In the overview below you will find three different “adventure levels”, to make it easier to determine whether visiting the cave is for you or not: 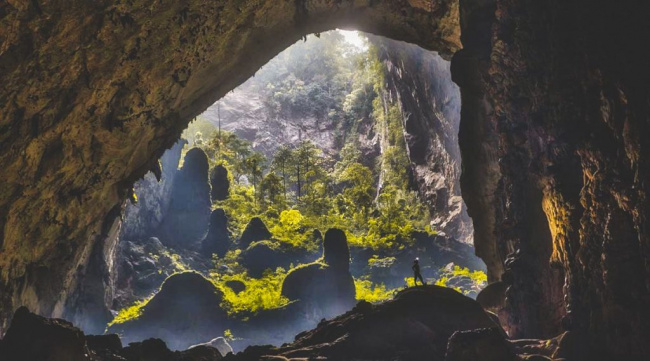 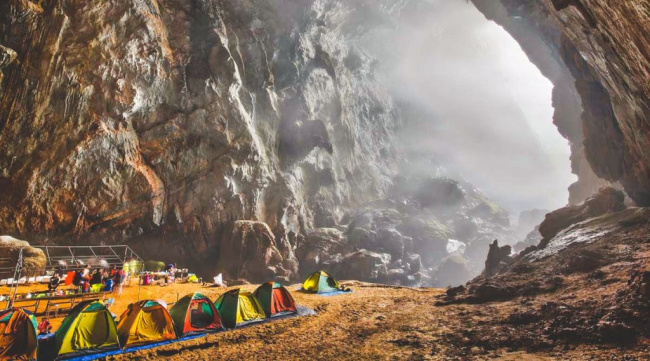 To begin with the cave of caves, Hang Son Doong. This cave was discovered in 2009 and is the largest cave in the world. Son Doong is huge: it has its own ecosystem with a rain forest of trees up to 30 meters high, with its own population of bats, birds and monkeys. If you want to visit Son Doong, you have to put down quite a bit of money. Maybe it will become more accessible in the future, with plans to build large cable cars here. You just have to ask yourself if it would be better if that wasn’t the case. 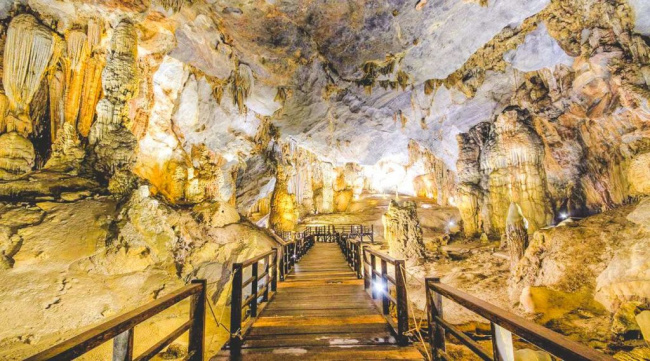 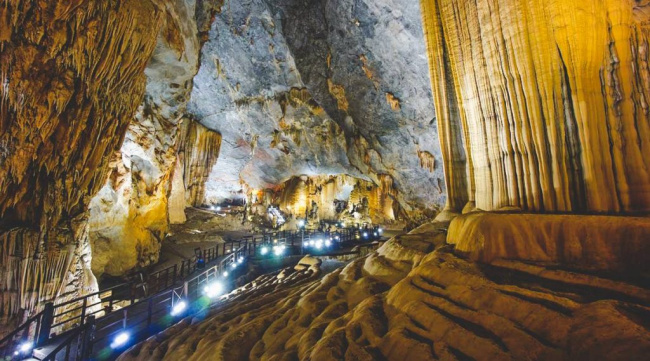 Paradise Cave was discovered in 2005 and is so named because of its incredible cathedral-like stalagmite and stalactite formations. The cave is 31 kilometers long with rooms up to 100 meters high and is three times larger than the Phong Nha cave. The limestone formations are also the most spectacular of any cave in the region. You can drive to the entrance. On the one hand it means that you can easily visit the cave as a day trip, but it also means that it is far from quiet. 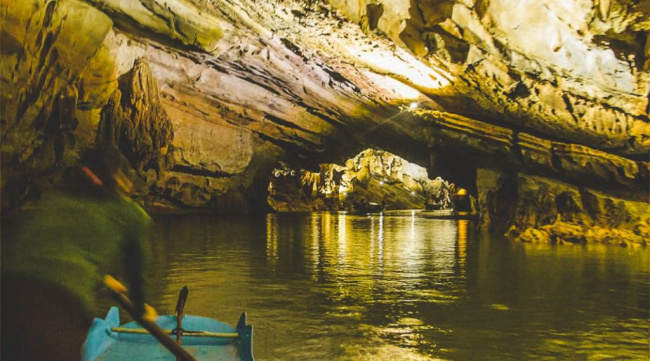 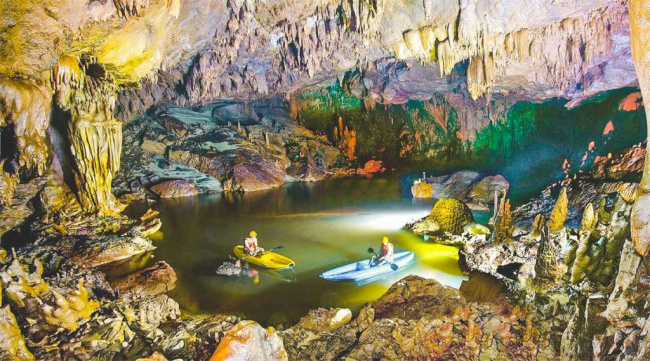 Phong Nha is the cave that gives its name to the national park, and is the most popular cave in the region. With a length of 7,729 meters, it is the longest underground river in the world. The Phong Nha cave is still pretty impressive, but after the newly discovered Paradise Cave and the largest cave in the world, Son Doong, the grandiose is a bit off. 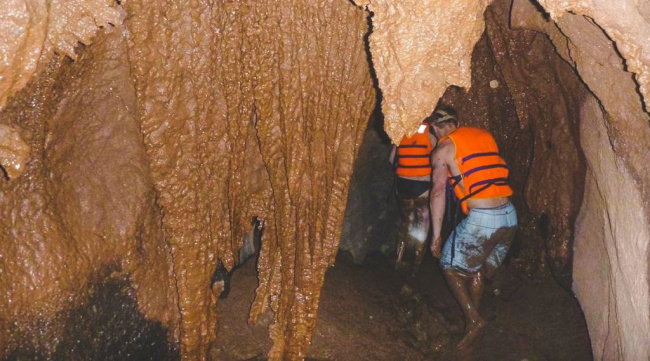 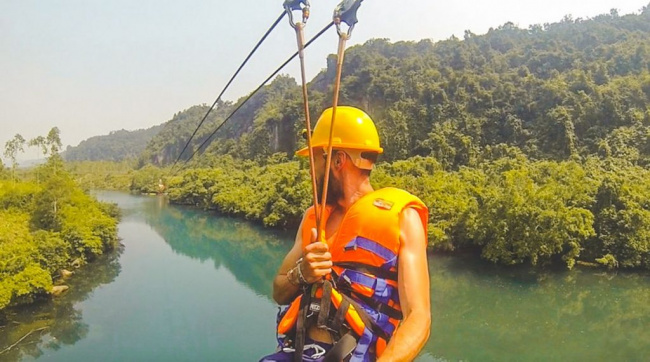 Of the three most popular caves, Dark Cave (Hang Toi) is the most adventurous (the other two are Phong Nha Cave and Paradise Cave). This cave is located 15 km from Phong Nha and is in reality more a fun adventurous half day than a good cave tour. You can expect this in Dark Cave: Hang En was considered the largest cave in Vietnam until the discovery of Son Doong, and despite having lost this tribute, it is still the third largest in the world. This cave is one of the most photogenic caves in the national park. The wide entrance opens directly into the lush jungle and light shafts illuminate a lake with a sandy beach. Unlike Paradise Cave or Phong Nha Cave, Hang En is only accessible after a trekking of approximately ten kilometers through the jungle, crossing rivers and climbing mountain slopes. It gives an excellent sense of adventure, but this also makes Hang And not a busy tourist cave compared to other caves in this National Park. The Tu Lan cave system is another adventurous cave, with underground waterfalls, green lakes, beautiful stalagmites and stalactites. Just like Hang En, this cave is relative inaccessibility; you have to walk several kilometers and swim a little to get there. This already gives a huge sense of adventure that is missing from the impressive Paradise Cave. A small piece of Son Doong for those who cannot afford the Son Soong price tag themselves: Hang Va. Hang Va and the nearby Hang Nuoc Nut are technically part of the Son Doong cave system due to their shared water flow, and contain rock formations that are even more impressive. These caves were only discovered in 2012, which means that there have been few people. Just like the Tu Lan and Hang Ken caves, you have to be pretty fit to explore this cave, walking over rocks, swimming through underground rivers and climbing. This cave is for the more adventurous traveler. The oldest discovered cave in the region is often skipped because it is very similar to Phong Nha Cave. The Tien Son cave is also 100 meters above the Phong Nha cave and can only be reached via a long steep staircase. The cave is in some parts up to 25 meters high and 35 meters wide. A visit to Tien Son Cave is usually combined with a visit to the Phong Nha Cave. Tra Ang is one of Vietnam’s most recently discovered caves and it was only opened to visitors in 2016. In that time it has received minimal visitor numbers. To reach it, you must trek through the dense jungle. The easiest option is to explore as part of a tour. Once inside, you can only explore the cave by swimming in the river that flows through it. The Tam Co cave or the 8 Ladies Cave is easy to visit without a guide and is a 20-minute drive from Paradise Cave. The cruel history of Vietnam can be seen in the small cave. Here in 1972 a group of women died after being trapped by a bomb explosion during the Vietnam War. Today there is an altar and temple in their honor. This cave has only just been opened to tourists and therefore there have really only been a few tourists. It is said that this is the fourth largest cave in the world. It is certainly very impressive, with a trek through the jungle, you can camp at the entrance to the cave and inside it is also beautiful.