Snake wine is a popular souvenir in Vietnam, but also very controversial. It is mainly drunk by traditional Vietnamese and adventurous travelers.

What is Vietnamese snake wine?

Vietnamese snake wine is a liqueur made by putting a whole snake in a bottle or jar with rice wine or some other grain alcohol. Then let it sit for several months and sometimes add herbs and spices are added in the process, for the taste or to mask bad smells. In some cases, other animals are also added, such as scorpions, insects, lizards or even small birds. All of these animals are recognized by Chinese medicine as having medicinal properties. 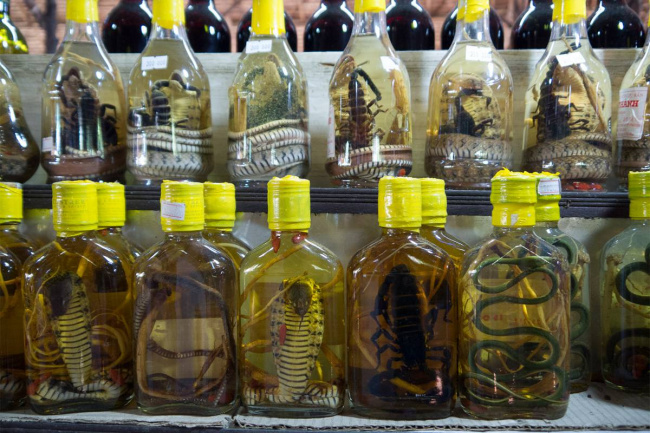 There is also a second way to drink this, which is called, snake blood wine. Snake blood wine is prepared by cutting open a snake and draining its blood into a mixing vessel with rice wine or some other grain alcohol. The gallbladder can be emptied with the wine and the snake’s flesh is prepared for eating along with the liver and skin.

Why are Vietnamese drinking snake wine?

Some people think that the snakes have medicinal properties and by drinking snakes wine, it could, among other things, cure certain diseases, against hair loss and to improve sexual performance. However, nothing has ever been proven about this and is mainly used to persuade buyers.

Is it safe to drink?

Yes, it is safe to drink Vietnamese snake wine. Despite the fact that this liqueur is made from a venomous snake. In the process of making the wine, the ethanol breaks down the snake’s venom.

Where to buy snake wine and how much does it cost?

Many travelers want to buy Vietnamese snake wine as a souvenir to bring home. Just keep in mind that importing snake wine is not legal in all countries, as some snakes are on the list of endangered species. It is best to check this before, to avoid problems. 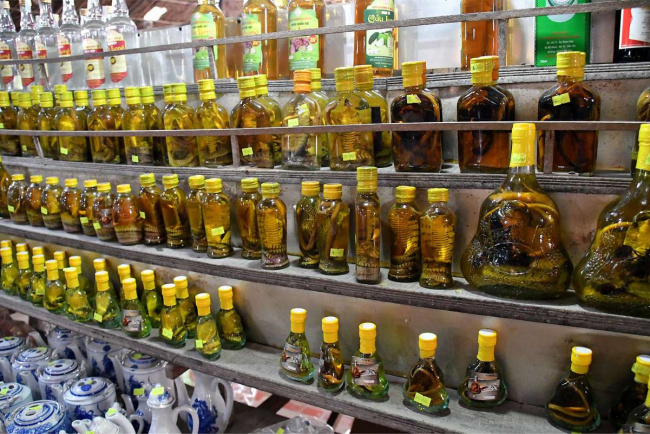 Also there is controversy surrounding the purchase of snake wine, in relation to animal cruelty and that is completely understandable. However, it is still an aspect of Vietnamese culture, as Vietnam is a developing country with some superstitions here and there.

This liqueur is served at street markets, bars and even airports. A popular place for travelers to buy it is at Ben Than Market in Ho Chi Minh City. The price for snake wine is between USD 20 and USD 180, depending on the size, type of bottle and type of snake.

About 7 kilometers from the city center of Hanoi you will find a snake village called Le Mat. In Le Mat snake village there are no fewer than 100 snake farms, two of which are large where snakes are incubated for snake wine and snake meat. Every day 1000 Vietnamese and foreign travelers come here to try out the local delicacies. Most of these snakes are cobras.

Từ khoá: Vietnamese snake wine – Where to buy it & What is it?